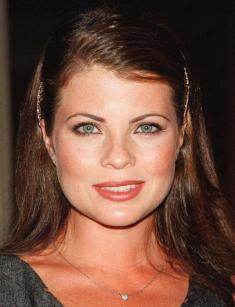 Jasmine spent her childhood on movie sets and auditions. Actress and model, Yasmine Bleeth, started her career quite early. By the age of 17, she had already become a star of the series Ryan's Hope, and later she appeared on the daytime soap opera One Life to Live. The role of Caroline Holden in Baywatch, which became one of the most-watched television shows in the world, according to the Guinness World Records. However, in 5 years after the show had closed, Yasmine finished her career and spent much time treating for the drug addiction.

Yasmine Amanda Bleeth was born on June 14, 1968, in New York, US. Her mother, Carina, was a model of French-Algerian descent, and his father, Phillip, was a photographer of German-Russian-Jewish origin.

Yasmine's parents got divorced soon, and the girl was brought up by her mother. Because of Carina's model career, Yasmine got into show-business early. When Yasmine was ten months old, she was first filmed in the baby shampoo television commercial for Johnson & Johnson. At the age of 6, she appeared on kids TV-show Candid Camera. Later, she collaborated with Max Factor. Her work in this campaign caught the eye of fashion photographer Francesco Scavullo, who subsequently included her and her mother in his book entitled Scavullo Women.

Yasmine Bleeth graduated from private middle school. Later she studied at the United Nations International School in New York. Yasmine spent her early years in the hometown, New York, and in Paris, where she and her mother went to visit their relatives, so the actress speaks French fluently.

In 1980, 12-year-old Bleeth was cast her first film role, opposite Buddy Hackett in the feature film Hey Babe!. 4 years later, she participated in her first big project. At age 16, Yasmine was cast on the daytime soap opera Ryan's Hope, where she played the protagonist Ryan Fenelli in the years of youth.

The project stayed on the screens for four seasons and made its actors famous TV-stars. Yasmine had got an army of fans and new role offers. But Bleeth's happiness crushed on the rocks in 1989, when her mother was diagnosed with inflammatory breast cancer. Carina Bleeth died within a year at the age of 47. After her death, Yasmine was depressed. She turned down acting offers for eight months, after which won the role on the daytime soap opera One Life to Live, which had been showed on TV since 1968. The actress played a secondary role of LeeAnn Demerest in the 2nd season. Later, she was cast in the series of Baywatch, a show about lifeguards' daily routine, working on the beaches of California and which already had four seasons. The show broke all the records as the most popular series.

Yasmine joined the team of Californian mermaids as a lifeguard Caroline Holden in 1993. Her character, strong and independent, was instantly appreciated by the audience. Among her fans dominated the male part, who enjoyed Yasmine's perfect figure (the actress is 165cm/5'5'' high) in her casual look, the red swimsuit.

While working in Baywatch, Bleeth didn’t turn down other offers. In 1994, she filmed opposite Jason Gedrick in the thriller The Force. In 1995-1996, Yasmine played the role of Caroline in spin-offs of Baywatch, Baywatch Nights and Baywatch: Forbidden Paradise.

The film A Face to Die For with Yasmine Bleeth in the major role was released in 1996. The actress portraited Emily Gilmore, a young woman who got the scar on her face because of physical and psychological trauma. Suffering from the complex and unsettled personal life, the woman meets Alec Dalton (James Wilder). Taking advantage of Emily's feelings, he pushes her to commit a crime.

In the same year, Yasmine played Diana Shepard in the drama Talk to Me. Her character, a talk show producer, is torn in the struggle between remorse and professional ambitions that make her get into the souls of the invited TV stars, not respecting their feelings and privacy.

In 1997, Bleeth finished shooting in Baywatch and decided to devote herself to new successful projects. She didn’t have to wait for a new major role. In the detective Crowned and Dangerous Yasmine played an ambitious Beauty Queen Danielle Stevens, who in the struggle for the crown and with the help of her mother decides on a terrible thing, the murder of her rival. It’s worth the sacrifice, and they just have to arrange everything so that no one suspected.

1998 was rich in bright, creative events for the actress. The star appeared in the science fiction thriller The Lake and finally made her debut in the genre of comedy, though unsuccessfully. The film BASEketball, in which she played a major role, failed at the box office, and Yasmine received a nomination for Golden Raspberry Awards as the worst actress.

A new project helped her to survive the failure. In the same year, she joined the team of actors of the detective series Nash Bridges. Her character, inspector Caitlin Cross, receives an appointment in the Department of Bridges (Don Johnson) and first begins to play tricks on him. But she doesn’t succeed in this and changes the opinion of the boss, and soon they have an affair. Yasmine was working in Nash Bridges for three seasons, until 2000.

Two years later, after the arrest for drug use and possession Yasmine announced the completion of her acting career and went to long-term rehabilitation. Among the latest works of her filmography are the roles in the thriller Hidden War (2000), the melodrama Goodbye, Casanova (2000), the series Titans, which was closed after the 1st season due to low ratings.

Being super popular in the 90-es, Yasmin Bleeth became one of the most enviable brides in Hollywood. However, the official marriage came into her life rather late. In his youth, the actress lived in a civil marriage with actor Ricky Paull Goldin, who supported her after her mother’s death.

Young people were already engaged and appointed the wedding day, but the actress changed her mind and canceled the ceremony. It’s known about the affair of the actress with a star of the TV series Friends, Matthew Perry, and with the actor David Carleton.

In 2002, Bleeth married Paul Cerrito, the owner of a strip club. The couple met in December 2000 at a clinic where they were both undergoing rehabilitation for cocaine addiction. The couple moved and settled in Scottsdale, Arizona.

The actress started a new chapter of her biography entitled Without Drugs. Yasmine now has little resemblance to that luxurious blue-eyed brown-haired woman from the Baywatch.

She gained weight and doesn’t like to pose for photographers, let along posting photos on Instagram. Since 1998, the actress has been actively supporting Breast Cancer Foundation of Susan G. Komen, which is fighting against breast cancer worldwide. 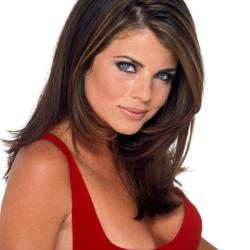