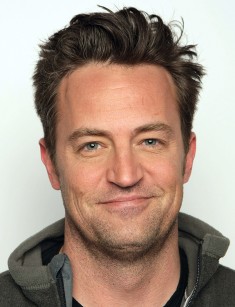 Matthew Perry is an American and Canadian film actor. He became famous after appearing in the youth super-sitcom "Friends" and the comedy "The Whole Nine Yards."

The actor was born in August 1969, in Williamstown, Massachusetts, in the family of an actor and a journalist. The mother of Matthew, Suzanne Marie, dreamed of becoming a model. His father John Bennett Perry worked in the film industry but he did not become famous.

Soon after the birth of the son, the couple broke up. Suzanne returned to her native Ottawa but did not make the career of a model. The woman worked as a clerk at the waiting room of the head of the government Pierre Trudeau but soon became the prime minister's press secretary.

Suzanne Marie found personal happiness in her second marriage. She married a television journalist Keith Morrison. The father of Matthew, John Bennet married the actress Debbie Boyle, who gave birth to their daughter Mia. Matthew Perry has one brother and three sisters with whom the future star stayed when his mother and stepfather were at work.

Matthew studied at the prestigious Rockcliffe Park School in Ottawa, and then he entered an elite private college. At school, Perry was interested more in tennis and theater than in acting career. Matthew won in junior competitions and intended to become a sportsman.

The 17-year-old boy moved to his father in America. But he was defeated in an important competition.

Matthew Perry focused on his second hobby - theater. He studied at the LA Connection in Sherman Oaks (the district of Los Angeles). Then the acting biography of the actor began: Perry appeared in the melodrama "A Night in the Life of Jimmy Reardon." Matthew liked starring in the films so much that he never dreamed of anything else.

But the father, who knew about the difficulties of the profession, insisted on his entering the university. John Bennett put the condition: if for a year the boy could live without his support, then he let him be an actor. Matthew did it and became an actor, although success did not come to him at once.

In Los Angeles, the beginning actor Matthew Perry appeared on the stage, playing significant roles in the plays "Our Town", "Sounds of Music" and "The Miracle Worker." The young boy was noticed by the Hollywood diva Patty Duke, the winner of "Oscar", "Golden Globe" and "Emmy." The star highly appreciated the potential of the young colleague, noting Perry's talent for improvisation.

Soon, critics and colleagues praised Matthew Perry for his acting skills and quick reaction. They called him as a brilliant comedian who knows how to balance between clowning and wit. These qualities helped Matthew on television: the producers invited the actor to star in several TV shows.

In the mid-1980s, Matthew Perry appeared in the comedy "Charles in Charge" and the melodrama "Silver Spoons". In those years, the actor thought about entering The University of Southern California but he was proposed to star in the main role in the series "Second Chance". At the beginning of the project, Perry shared the main role with his colleague with Kiel Martin. But the viewers' feedback forced the producers to change the format of the series and make Matthew the only key character.

Until the late 1980s, Matthew Perry starred in the films "Dance 'til Dawn", "Just the ten of us", "She's Out of Control", "Empty Nest" and "Growing Pains". The last film is a family comedy about the life of the Seaver family.

In the 1990s, Matthew Perry became very famous as a comedy actor. He starred in the comedy series "Home Free", "Empty Nest" and "Who's the Boss?" The last sitcom had 8 seasons and was broadcast on the ABC channel from the autumn of 1984 to the spring of 1992.

The name of Matthew Perry became famous but the real triumph was in 1994 when the mega-popular sitcom "Friends" appeared on the world screens. The main characters were played by Jennifer Aniston, Lisa Kudrow, Courteney Cox, Matt LeBlanc, David Schwimmer and Matthew Perry. The actor played the role of Chandler Bing, a loser with complexes. The role of Chandler helped him to become the Hollywood star. "Friends" were broadcast until 2004. There were released 10 seasons of the cult sitcom.

Since the late 1990s and after the release of the comedy series, Hollywood directors invited Matthew Perry to star in the series and full-length films. He starred in the comedy "Fools Rush In" with Salma Hayek, "Almost Heroes" with Chris Farley and "Three to Tango." In these films, the directors used Chandler's image familiar to millions of fans of “Friends”.

Another great success in the career of Matthew Perry was the comedy "The Whole Nine Yards” by Jonathan Lynn. The comedian got the role of a dentist Nick "Oz" Oseransk. He lived a simple life until the former criminal and killer Jimmy "The Tulip" Tudeski (played by Bruce Willis) became his neighbor. The comedy was so successful that 3 years later the sequel of the film was released, where the audience saw their favorite actors again.

During the break between these two films, Matthew Perry starred in the comedy "Serving Sara" along with Elizabeth Hurley, the comic drama "Ally McBeal" and the political drama series "The West Wing." In the last project, Perry demonstrated to the audience that he copes well with both comedy and dramatic roles. He played Quincy, an employee of the White House. The actor was nominated for Emmy award twice.

In 2004, Matthew Perry debuted as a director in the comedy drama "Scrubs", playing in the 11th series of the fourth season along with his father.

2006 brought a new wave of success to the star: the drama "The Ron Clark Story" was released. The actor played the role of a teacher, who worked with difficult teenagers. For this film, Perry was nominated for the prestigious Golden Globe and Emmy.

The following works of the actor were also successful. In the autumn of 2006, the comedy drama "Studio 60 on the Sunset Strip" was released. It was broadcast by NBC until the summer of 2007. In 2007, fans of Matthew Perry saw the idol in a dramatic role in the feature film "Numb."

In 2015, the actor became a co-author and producer of the comedy series "The Odd Couple". He played the main role, Oscar Madison, whose wife left him. The second "odd" couple was his colleague Thomas Lennon, who appeared in the role of a boring photographer. The sitcom is a remake of serials, based on the book by Neil Simon. The film was broadcast on CBS until May 2017. There were three seasons.

Millions of viewers around the world fell in love with the charismatic blue-eyed and high (Matthew's height is 1.83 meter) man with an excellent sense of humor. Perry missed a tip of his right hand's middle finger.

In 1999, Matthew Perry took the 7th place in the top 50 most beautiful people on the planet, according to the "People" magazine. There were rumors that the comedian had relations with Julia Roberts, Lizzy Caplan, Lauren Graham and Yasmine Bleeth. But Matthew is a famous conspirator who knows how to keep his mouth shut. It is known little about the actor’s relations.

The actor is still single. Matthew Perry is 50 years and remains an enviable bachelor. He never had an official wife and has no children.

In 2015, there were rumors that Matthew Perry had relations with Courtney Cox, with whom he played in “Friends”. In November, Courtney broke up with the Irish musician Johnny McDaid and began the relationship with Matthew. There appeared information, that 11 years later, after the end of the series, Monica and Chandler united.

But there were just rumors about romantic relations of two stars. A week later, Perry and Cox said that they were only friends, and they were not ready for new relations.

The star has 158 thousand followers on the Instagram. In 2016, NBC channel released a two-hour program. The producers called the actors of the cult sitcom “Friends”. But the audience was disappointed because there was no Matthew-Chandler in the project.

Later, Perry admitted that he refused to participate in the program and would never agree to star in the continuation of the sitcom because at 47 years he wanted to star in dramas, not in comedies. In addition, Perry plays the main role on the Broadway stage in "The End of Longing." He also stars in films.

In February 2017, there was a premiere of the drama "The Good Fight", where Matthew got the role of the second plan. In Russia, the film was released in March. Then, in March 2017, the Hollywood actor appeared in the mini-series "The Kennedys: After Camelot", where Perry played the role of Edward Kennedy. The role of Jacqueline was played by Katie Holmes. 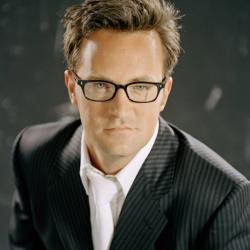