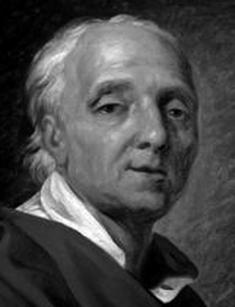 The French philosopher and writer, Denis Diderot, became world-famous for his essays on religion and art, insightful novels about the hard lives of nuns, family plays and the largest general encyclopedia of the Enlightenment “Encyclopedia, or a Systematic Dictionary of the Sciences, Arts, and Crafts." His correspondence with Sophie Volland became the gold standard of the romantic letters, showing the features of the strict but fair representative of France of the XVIII century.

Denis Diderot was born on October 5, 1713, in the French city of Langres to Didier Diderot and Angélique Vigneron. Only four of seven children survived to adulthood. Denis was the oldest child and helped to take care of sisters Denise (1715-1797) and Angélique (1720-1749), brother Pierre-Didier (1722-1787). According to historians, Denis liked Denise most of all, admired her, sometimes referring to her as "a female Socrates."

In childhood, the future writer was a brilliant student. The parents decided that the boy would work in the church clergy. In 1726, Denis entered the lycée Saint-Louis, where future priests studied, then the Jansenist Collège d'Harcourt. He studied the universe and the place of man in it. In 1732, Diderot graduated from the college earning a Master of Arts degree in philosophy.

The ideas of his epoch, views toward the history of the development of the statehood and law, made Diderot abandoned the idea of entering the clergy and study at the Paris Law Faculty. Later, in 1749, the Frenchman finally became disenchanted with religion when his beloved sister Angélique, a nun, died from overwork during church service.

Denis Diderot expressed his desire to become a writer in 1743. He began translating English works into French. The early works include a translation of Temple Stanyan's History of Greece (1743), Robert James's Medicinal Dictionary (1746-1748). In 1745 he published English philosopher Anthony Shaftesbury's Inquiry Concerning Virtue and Merit, to which he had added his own "reflections."

In 1746, Diderot published his first original work “Philosophical Thoughts." In this book, the Frenchman argued for a reconciliation of reason with feeling and came to the conclusion that feeling without discipline can be destructive, and the reason is necessary to control feeling. At the time, Diderot adhered to deism; therefore the work contains arguments against atheism and criticism of Christianity.

The religious idea was discussed in detail in The Skeptic's Walk (1747), in which a deist, an atheist, and a pantheist have a dialogue on the nature of divinity. The deist gives the argument from design, and the atheist explains the origin of the universe by physics, chemistry, and the laws of motion; the pantheist says that God is the cosmic unity of mind and matter.

The Skeptic's Walk was published only in 1830 because the local police threatened to burn the manuscript and arrest Diderot if he spread this heresy. They delivered on a threat in 1749 when the philosopher was imprisoned in the Vincennes for the work “Letter on the Blind." In a separate cell, Diderot had only John Milton's "Paradise Lost," on which he left notes with a toothpick and ink that he made on his own. The imprisonment lasted from July to November.

In 1750, Diderot became the chief editor of the largest French general encyclopedia of the Enlightenment "Encyclopedia, or a Systematic Dictionary of the Sciences, Arts, and Crafts." For 16 years of his work on the book, Denis wrote several hundred articles on economics, mechanics, philosophy, politics, and religion. Jean-Jacques Rousseau, Voltaire, Montesquieu, and other great Frenchmen worked alongside Diderot.

Diderot edited 28 of 35 volumes of “Encyclopédie.” He ceased the collaboration with publisher André le Breton because the latter excluded some "dangerous" thoughts from the articles without the permission of the thinker. The philosopher considered this act a betrayal and stopped working on the monumental product.

In the 1750s, the Frenchman paid his attention to the theater and wrote a series of plays devoted to family topics. The drama "The Natural Son" (Le Fils naturel, 1757) brings up the subject of illegitimate children, and "The Father of the Family" (Le Père de famille, 1758) is an autobiographical book, in which the protagonist marries at the bidding of the heart, but not at the request of the father.

At that time, the theater was divided into high (tragedy) and low (comedy). The philosopher did not accept such a system and wrote in “Paradox of the Actor” that aristocrats had funny events in life, while poor people had sad moments. In his work, he comes up with a “serious genre” that blurred the line between tragedy and comedy.

Besides the philosophy essays, works on art ("Salons"), and plays, Diderot wrote novels. The main ones are the novel “Jacques the Fatalist and his Master” (1765–1780), the conversation “Rameau's Nephew” (the 1760s), the story “The Nun” (1780). Diderot was also an author of quotes, including the statement “staircase wit," which means to think an idea too late to use it effectively.

The biography of Denis Diderot was closely associated with Russia, in particular with Catherine the Great. When she heard of the financial troubles of the talented French philosopher, the Empress offered to buy his library and requested him to act as her librarian with a yearly salary of 1,000 livres. She even paid him 25 years salary in advance.

In October 1773, the Frenchman arrived in St. Petersburg and stayed in Russia for five months. During this period, Diderot met Catherine II almost every day. The philosopher slapped her thighs to draw the attention of the Empress to his thoughts.

In a letter to Marie Geoffrin, the owner of a French literary salon, Catherine wrote that after conversations with Diderot, her thighs bruised quite black.

One of the topics discussed was the ideas about how to transform Russia into a utopia. Catherine the Great thought that Diderot's thoughts were unreasonable. In a letter to diplomat Louis Philippe, comte de Ségur, the Empress wrote that if she followed his advice, chaos would ensue in Russia.

At the beginning of 1743, the philosopher met Anne-Antoinette Champion (1710-1796). The woman had low social standing and poor education. She lived with her mother in the same house where Diderot settled. The young man wanted to marry her and asked his father for permission to do it. Didier did not merely oppose the idea of his son but got an extrajudicial document to arrest Denis. The writer was imprisoned in the Carmelite Monastery.

A few weeks later, Diderot escaped and immediately sent a letter to his beloved woman, making Antoinette a marriage proposal. The woman refused because she did not want to be part of the family who did not like her. However, later the Frenchwoman changed her mind. In the early hours of November 6, 1743, Diderot and Champion married secretly in one of the churches in Paris without parental consent. It is an exciting fact that Denis's father found out about his son's marriage six years later.

Four children were born in this marriage. The first child, Angélique, was born on August 14, 1744, and died after a month and a half, on September 29. Sons François Jacques and Denis Laurent also died in infancy. The only surviving child was Marie Angélique (1753-1824), named after both dead mother and sister of the Frenchman. She became famous as an instrumentalist.

Diderot’s personal life had a lot of love affairs. His mistresses were writer Madeleine de Puisieux, Jeanne-Catherine de Maux, a daughter of a French actor, and, of course, Sophie Volland. Mademoiselle Volland's real name is Louise-Henriette, and Diderot gave her the sobriquet of "Sophie," admiring her wisdom. Initially, they began a meaningless correspondence in 1755, and it eventually turned into love letters and an affair, which ended in 1784, when Sophie died.

Thanks to the numbering, it is known for sure that the philosopher sent 553 letters to Sophie, and 187 of them survived. They contain quotes proving their sincere feelings:

"I love you so much as you can love only once, and I will love no one but you."

Her letters to Diderot did not survive, so it is also unknown what the woman looked like. They say that a friend of the philosopher painted a portrait of Mademoiselle Volland in the flyleaf of his copy of Horace's. After Diderot’s death, Catherine II bought his entire library, and the mysterious picture was lost.

His body was buried in the Church of Saint-Roch, but all the graves in the church were destroyed during the French Revolution of 1789. Now it is unknown where the remains of the philosopher are located.

“To take the vow of poverty means to swear to be lazy and a thief. To make the vow of chastity is to promise God to violate the wisest and most important of his laws constantly. To vow obedience is to renounce the inalienable human right of freedom. If a man keeps his vow, he is a criminal; if he violates his vow, he is a perjurer. Monastic life is the life of a fanatic or hypocrite.”

"We swallow greedily any lie that flatters us, but we sip only little by little at a truth we find bitter."

“'People stop thinking when they cease to read." 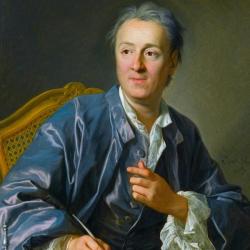