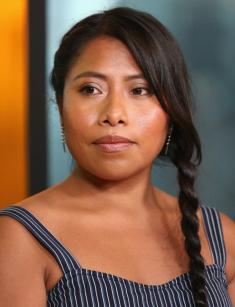 Yalitza Aparicio Martínez is a Mexican actress who used to be a school teacher earlier. She is known as a woman who has never acted before and has received the role of Cleo in Roma, Alfonso Cuarón’s drama movie of 2018 which has won a lot of awards.

Yalitza Aparicio was born in 1993 in Mexico. Even though her father is Mixtec, Yalitza is not fluent in its language, but for her part in Roma, she had to learn it. The actress was raised by her single mother. Aparicio’s educational background was rather unusual: she did not go to any acting classes. Instead, she received a degree in early childhood education. Right before qualifying as a teacher, Yalitza got her debut role.

How the woman who was preparing to be a teacher eventually became an actress? Yalitza’s sister encouraged her to go for casting. Aparicio did not know what the movie was about, but she admired the character, Cleo, who was a nanny and a maid like an actress' mother. Besides, Yalitza herself worked as a domestic worker, so she had enough life experience to understand her role.

After the appearance in Roma, Aparicio gained a lot of admirers. In spring 2019, some of her fans got excited when they saw a woman in one of the episodes of the series Big Bang Theory who looked like Yalitza. However, it turned out that it was not her.

In 2019, Aparicio appeared on the covers of Vanity Fair “Hollywood Issue” and Vogue México. For that year, the actress has a net worth of $350,000 which she earned from her part in Roma.

Speaking about Aparicio’s love life, it remains to be a secret. It is unknown whether the actress has a husband or children. In Roma, her character Cleo has a romantic relationship with Fermin, a character of Jorge Antonio Guerrero. These two worked with each other rather well so we hope to see them together in upcoming projects.

Yalitza does not speak English, so now she attends the EF, Education First, the school in New York and learns English there. When she appeared on Jimmy Kimmel Live!, Kimmel’s assistant, Guillermo Rodriguez, acted as her interpreter during the whole show.

At the beginning of 2019, Yalitza appeared in the Lenovo Commercial and posted her photo on Instagram. The interesting thing was that her face got "white-washed," meaning it changed its color to a brighter one.

For her role in Roma, Aparicio has been nominated for 14 awards, including Ariel Award and Critics' Choice Award. The actress became the second Mexican woman who has received an Oscar nomination as the Best Actress. The first one was Salma Hayek who had played in Frida in 2002.