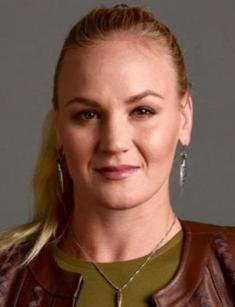 Valentina Shevchenko is a Kyrgyz athlete and professional mixed martial artist. Her credentials have included 16 victories during her martial arts, kickboxing, and Muay Thai career, but not everyone knows that Valentina is not only a strong fighter and an attractive woman but also a good shooter and a beautiful dancer.

Valentina Anatolievna Shevchenko was born in the capital of Kyrgyzstan on March 7, 1988. She is Russian, although she did not live in Russia for a long time. The woman says that she was born in the USSR and considers herself a Soviet person. When she was five years old, the girl began to train in taekwondo under Pavel Fedotov, whom she later often thanked in interviews for his wise leadership. According to Valentina, she owes all her achievements to him.

The girl has a sister Antonina who is also an outstanding athlete and the Muay Thai World Champion. Their mother headed the Thai Boxing Federation of the Kyrgyz Republic and achieved a 3rd Dan black belt in taekwondo, so it was not surprising that the girls were interested in such sports. Both sisters Shevchenko have trained with Fedotov for all their lives. Valentina says that he has taught them to be not only athletes but also strong, self-confident people.

Before her UFC debut, Shevchenko was involved in kickboxing and Thai boxing and had 16 victories at the world championship. In her youth, she moved to Russia and trained for several years in Moscow, but later received an invitation to move to Peru and agreed without hesitation.

According to Valentina, she fell in love with this faraway country at first sight. Women's fights are extremely popular there, and female athletes always attract the attention of the media and fans. Valentina considers Peru her adopted country, although she got into serious trouble there. One day, an armed robbery occurred at a restaurant where she and her trainer were sitting. Pavel Fedotov was shot in the left side of the belly and had to spend several months in the hospital.

Valentina made her MMA debuted in 2003. Before the first professional fight, the coach gave her the nickname Bullet, under which she became famous later. Shevchenko became a world champion twice in 2003 and 2005 until she suffered a crushing defeat in the match against experienced rival Liz Carmouche. Valentina lost the 1st round and was not allowed to compete in the 2nd round, after which she had to take a career break.

The woman began training in kickboxing and Muay Thai, and she also quickly reached the sports stardom. After another gold medal at the championship, she returned to the ring. After two victories via technical knockout and a resounding win at the Legacy Fighting championship, Valentina moved to a new level when she was offered a contract with UFC, the largest MMA promotion company.

The athlete made a brilliant UFC debut. In the very first fight, she defeated an experienced and strong rival, Sarah Kaufman, the former Strikeforce Women's Bantamweight Champion. However, it was followed by the loss to Amanda Nunes, which did not affect Valentina's fighting spirit. The next match against Holly Holm brought Shevchenko the primary victory in her career; she became the UFC Flyweight Champion.

Now Shevchenko is not married and does not want to have a husband and children in the near feature. She rarely talks about personal life; her sister has said in an interview that Valentina has a lot of admirers who regularly confess their love and make a marriage proposal, but the woman keeps everyone out.

“She has her own goal, so Valentina is not going to start a relationship,” Antonina explains.

In addition to martial arts, Valentina has many diverse hobbies. One of them is associated with her nickname Bullet because the woman is seriously interested in shooting and even received prizes at world championships. In 2013, she became the runner-up at the next stage of the shooting tournament held in Peru and later won the bronze medal at the national championship. She showed brilliant performance using a short rifle, Winchester rifle, and gun; moreover, the woman had to compete with men as well.

The athlete owes the passion for dancing to her mother. The woman insisted that Valentina attend the appropriate class, wanting to make her daughter more girlish. Now Shevchenko and her sister Antonina are outstanding flamenco, lezghinka, and folk dancers; they also teache dancing.

Valentina has tattoos on her body; each of them has a special meaning and is associated with some event. The first one shows the emblem of the Thai Boxing Federation, depicting two leopards, made in the style of the Kyrgyz national pattern. The athlete got it in 2006 and considered the tattoo to be her talisman.

Shevchenko has an Instagram page, where she often posts photos of her friends, sister, and mother, the pictures of workouts and rest. The pics depict her wearing a bikini, athletic apparel, and gorgeous dresses.

At present, Valentina's net worth is assumed no less than the six digit figure.

2018 was supposed to be busy for the athlete, but in fact, they regularly canceled fights. At first, the match with Nicco Montaño (she had got to the hospital the day before) was postponed, then the battle with the former flyweight champion, Joana Engeicik, was canceled because she did not agree to postpone the date.

After the incident with Montaño, Valentina gave a toughly worded statement in the press about the rival. She did not believe that the woman had health problems, saying that Nicco was deliberately avoiding entering the ring and just wanted to "promote herself and run away at the last minute." Bullet dreams of taking revenge soon in the fight with Amanda Nunes:

“I believe that our business is not finished and will be continued,” she says.