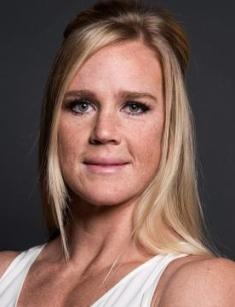 Holly Holm is a unique sportswoman who has managed to become the owner of the championship titles both in boxing and mixed martial arts. A colleague of the woman, Jon Jones, called her the greatest female fighter. And if you look at the list of Holm's achievements, you will find him right.

Holly Rene Holm was born on October 17, 1981, in Albuquerque, New Mexico, but grew up in the nearby village of Bosque Farms. Holly was nicknamed "The Preacher's Daughter" as her father worked as a Church of Christ preacher. Holly's mother, Tammy, worked as a massage therapist. The family has Irish and Swedish roots.

The girl was the youngest of 3 children. She has two older brothers, Brian and Weston. As a teenager, Holly became interested in sports. She played football, did gymnastics, and was engaged in swimming and diving.

Shortly before Holm finished high school, her parents divorced. After secondary education, she attended the University of New Mexico, where she studied for one year.

The first martial art that Holly mastered was kickboxing. Her cardio-kickboxing instructor saw in Holm potential as a fighter and started training her. In September 2001, she took part at the International Kickboxing Federation (IKF) USA National Amateur Championship Tournament, held in Kansas City, Missouri. There, after two welterweight fights, she won her first championship title.

The next step of her career as a fighter was boxing, in which Holm also achieved significant success. In addition to her official titles, Holly Holm was considered to be one of the best female boxers in the whole history of this sport. In 2008, Holly became a welterweight champion, defeating Mary Jo Sanders, the former titleholder. The ensuing rematch ended in a draw.

On December 2, 2011, the Hill entered into the ring against the French boxer Anne Sophie Mathis. Luck turned away from the woman, and Mathis beat her severely, and despite the cruelty of Holly's opponent, the referee did not interfere in the process. The fight was called a disappointment of the year. But in 2012, Holm took revenge and regained the status quo, winning a final victory over her opponent.

The debut fight in MMA took place on March 4, 2011. Holly's opponent was Christina Domke. Holm won the fight with the technical knockout in the 2nd round. In autumn she continued to fight in mixed martial arts and again won, this time over an experienced fighter Jan Finney.

In 2013, Holly performed at the Bellator MMA, where she fought with Katie Merrill. Holm again won with a technical knockout in the 2nd round. After that, Holm said that after the match with Mary McGee she would leave the boxing and continue to be engaged only in MMA. The boxing career ended with a victorious fight, and Mary was the last fighter whom Holly defeated in this sport.

On July 13, 2013, Holm fought with Alanna Jones at the Legacy Fighting Championship 21. Holly knocked her opponent out in the 1st round. The next victory was the technical knockout of Nikki Knudsen. And at the end of the year in Fresquez Productions: Havoc Holly defeated Angela Hayes in the ring.

In the spring of 2014, Juliana Werner became Holm's next opponent. They both fought for the title of Legacy F.C. Champion in the middleweight. Holm won, though it was not easy as in the 1st round she broke her left arm.

On July 10, 2014, Holly signed the contract for five fights with UFC. It was expected that Holm would take part in the first fight in UFC in November against Raquel Pennington, but the fight had to be postponed because of injuries Holm had got. The match took place in February 2015. Although the opinions of the judges were divided, the victory still went to Holly. The next opponent was Marion Reneau, and on July 15, 2015, the fight ended in favor of Holm.

A significant achievement of the sportswoman in the lightest weight was the victory over Ronda Rousey. In Round 2, Holly knocked her out with an accurate kick, interrupting her 3-year winning streak and sending her to a hospital bed. Having taken away a title from the opponent, Holm became the first person in the history of martial arts who won the Championships both on boxing, and on MMA.

However, she could not keep the title, and Holm lost to Miesha Tate in the first fight that took on March 5, 2016. Tate won in the 5th round. The next fight with Valentina Shevchenko, a fighter from the Kyrgyz Republic, also ended not in favor of Holly. After the 5th round, judges unanimously declared Valentina a winner.

In 2017, the martial artist decided to try her hand at featherweight and took part in the UFC 2008. Germaine de Randamie was fighting against her, and the fight was very tough. At the end of the 2nd and 3rd rounds, the opponent continued to beat Holly even after the 5-minute signal. The referee never stopped Germaine, which eventually led to the Holm's defeat.

After that, she returned to the lightest category (with the height of 7'3''/172 cm and the weight of 135 lbs /61 kg) and fought with Brazilian Bethe "Pitbull" Correia. This fight was much better. Holly knocked the opponent out in the 3rd round. After that, she again tried her strength at a half lightweight. On December 30, 2017, she fought with Cris 'Cyborg' Justino and, as in the first attempt, was defeated. Holly won the new weight category only on June 9, 2018, having defeated Megan Anderson by the judges' decision.

Holly is very close to her family and often communicates with her brothers and parents. The father of the sportswoman supports all her undertakings and for many years waits for the daughter in a ring corner during fights. The mother is not so calm about martial arts, and she is often not seen at the matches with Holm's participation.

The Preacher's Daughter, of course, is Christian, and her faith background is in Churches of Christ. In 2012, the martial artist's personal life changed. Holly was married to Jeff Kirkpatrick. Like Holm herself, her husband was from Albuquerque. The couple had no children. At the beginning of 2019, it was revealed that the couple had separated in March 2018. Holm filed for a divorce and sought out to get her maiden name back.

In 2016, the martial artist tried herself as an actress. She performed a major role in the movie Fight Valley. However, the project did not have success, and on the IMDB site, it has a deficient rating.

Holly Holm has a net worth of $4 million.

There's information on the Internet that Holly got her first injury in her career: she hurt her knee. As a result, according to open sources, the woman had to undergo the operation, which prevented her from fighting until the end of 2018.

To please fans, Holly Holm is active in her personal account on Instagram. Holly regularly posts new photos there. The fans can see her both during training and spending free time, and even with opponents in the octagon outside the perimeter. These images are incredibly peaceful.