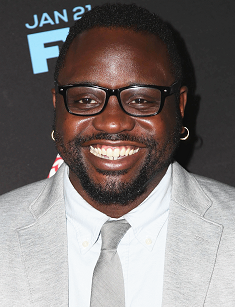 Brian Tyree Henry is an American actor, who's the most famous works are Atlanta, a TV series, where he still stars and films such as Widows (2018), If Beale Street Could Talk (2018) and Spider-Man: Into the Spider-Verse (2018). Among his upcoming movies, there are Child's Play, Joker, The Woman in the Window, Super Intelligence, Godzilla vs. Kong and The Outside Story.

Besides the cinematography, Henry is a prominent figure in the theatre. He has been working a lot with The Public Theatre, and he has also acted in some Broadway plays.

Brian was born in Fayetteville, North Carolina. His father was retired military, and his mom was a sixth-grade teacher. In summer, Brian used to help his mom with decorating her classroom; he was really close to his mother. His dad was an understanding person too; he believed in Brian Tyree. When Brian's dad was young, he had less opportunity because of the time, because of racism. After Henry being born, his father was so excited because it was a different time, his son could do anything and achieve any goal he wanted.

Brian also has four sisters that are older than him. Brian says that the home atmosphere was always cozy and warm; every family member was supportive. His family was fond of music; that was one of the common features of his relatives; they used to play instruments and sing some cheerful songs. For the rest, they were really different. The fact that Brian was raised in the family full of adults (when he just was born, his sisters were already teenagers) helped him to understand what he wanted to do with his life. He was watching all this adult life that was going on in their house, and he enjoyed imitating them a little. That's when Brian realized he really liked to imitate people. Anyway, he didn't clearly understand that he would like to become an actor until college.

Henry went to Washington D.C., when his mother moved there, to stay with her for a while. After that, he moved back to North Carolina to finish high school. At school, Brian has been playing in the marching band named The Magnificent Marching Machine.

Speaking about Henry’s education, he graduated from the Morehouse College in Atlanta, Georgia in the early 2000s, and then he got his master's degree in Yale School of Drama.

In college, he attended a business management class that he just hated. So, one day, his friends invited him to the audition for the college play Come and Gone. He got the lead role. By the way, almost everyone that Brian has met in theater classes is still his friend to this day.

One of the most important people in Henry’s life was Crystal Dickinson, his teacher in college and also an actress. When Henry graduated, he planned to move to Washington D.C. to his family and work here in security as all of his sisters. Dickison was the one who pushed him to go to the audition for Yales. And he went it successfully.

Henry’s career started in New York City Theater. In 2007, he played Tybalt in Shakespeare's Romeo and Juliet in the Park (an open-air theater in New York City's Central Park). That’s how he started working with The Public Theatre, where he acted in The Brothers Size (2007), that was actually written by Brian’s former classmate, Tarell Alvin McCraney, In The Red and Brown Water (2009), Marcus; Or the Secret of Sweet (2009) and The Fortress of Solitude (2014). His Broadway debut was the role of General in The Book of Mormon (2011). Another time when he acted in a Broadway theatre was Lobby Hero (2018) staged in Helen Hayes Theatre. In 2018, for the Lobby Hero Brian was nominated for Tony Award for Best Featured Actor in a Play. Henry was grateful for his experience in this play, but he realized that Broadway musicals are just not for him.

Along with the theatre career, Brian has been developing his acting skills by playing in various movies. One of the most famous works of Brian is the FX television series, Atlanta, where he got the role of Alfred. The actor himself is really excited about his acting role because he sees a lot of common between him and Alfred. Henry thinks that Alfred has some aspects such as a great sense of humor and loyalty to the family that are similar for Brian and his father at the same time.

Relations of Alfred and his companion Darius remind Brian of his friendship with an old mate Gabriel. That’s what Henry says about this role:

“It just felt personal. I felt like I knew who Alfred was. All I could do was go in and give him my flair.”

After the Atlanta wrap party in 2016, Henry's mother, Willow Deane Kearse died in a car accident. Brian was very close to her; it was a hard time for him. One of the episodes of Atlanta named Woods is dedicated to Deane.

Brian Tyree was nominated for five awards for his acting in Atlanta, and three awards for This Is Us.

Speaking about Brian’s love life, actually, no one knows a thing. He doesn’t have a wife; he doesn't date anyone. Of course, there were some rumors about him being gay. However, Brian Tyree has a traditional orientation; the point is that he is just so focused on his career, that he cannot spend his time dating someone right now.

Brian has a best friend, Sterling K. Brown. They met in 2007 at the Sundance Theater Lab while working on the play “Wig Out” written by Tarell Alvin McCraney. They both were playing drag queens. There is a funny story about how their friendship started. The thing is that Brian needed to shave his beard for the acting, so Sterling got the clippers and helped him, and that’s what Henry says about it:

Brian earns his net worth by acting in films and theatre, but it always has been not about the money. Henry sincerely believes that if he doesn't like the role he plays, if he doesn't enjoy his work, then he will not do it for any money. He says that acting is not about the salary; it's about the talent, emotions that you get from this. Actually, this is really inspiring, when nowadays a person make their goal to be not money, but something more spiritual.

For the whole success that Brian got, he is extremely grateful to his mother. When she passed away, he couldn't imagine how to move further. She always used to push him, to inspire him to keep doing what he's doing. In one of his interview, he says:

“She was very proud and very happy, and she believed in me when I didn’t think I could do anything. All this is for her.”

Both of them have achieved great success, and they continue working with each other sometimes, for instance, they acted in This Is Us (2017) together.

At present Brian's net worth is estimated at ‎$1 million.