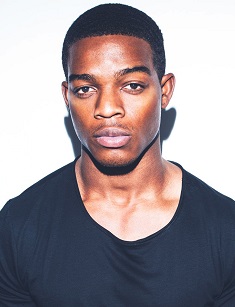 Stephan James is a Canadian actor, who became famous after the lead role of a sportsman Jesse Owens in the 2016 movie Race. He started his career quite early and starred in a bunch of TV series before he was noticed and appraised as a serious young actor.

James was born on the 16th of December and spent his childhood in Scarborough, which is the administrative district in Toronto, Ontario. His parents moved there from Jamaica, leaving the capital of St. Catherine. However, James’ mother was a single parent who was capable of solving not only her problems but those of other people, working as a social worker. After witnessing ups and downs of many lots, she became sure of what the most critical aspect of life is. And that thing is school, so she insisted on the excellent education for her boys.

James’s family is another example of a star duo: Stephan’s older brother is Shamier Anderson, who is also successful and highly demanded. According to Stephan's words, he has always referred to his brother for any piece of advice or just to realize that success is an available and material thing, standing in front of him represented by Shamier.

James started professional acting at the age of 16, while he was still participating in school plays at college.

He starred in dozens of TV series and appeared in many shows, including the one for teens - Degrassi: The Next Generation (2001-2015). Almost every Canadian celebrity featured this TV series, for example, a rapper Drake and an actress Nina Dobrev, telling about a school in Toronto. So, this show was a pretty good start for Stephan.

James continued with other supporting roles on television, such as The L.A. Complex, My Babysitter's a Vampire, Clue, 12 Days of Christmas.

He got his first significant role in the drama film Home Again (2012), in which he was playing one of the Jamaican persons, who were deported back to their origin despite having citizenship of Anglo-Saxon countries. The movie wasn't accepted that delightfully, but James was noticed and called heartbreaking. He was also nominated for some local awards but eventually lost.

One serious work was followed by another - he was cast in the American film Selma (2013). Selma was directed by Ada DuVernay, whom James considers to be his idol since she is on taking risks for the projects she feels connected to. The historical drama is named after the place Selma in Alabama, where the voting rights marches took place in the 1960s. James depicted John Lewis, an American politician and one of the «Big Six» leaders, who played key roles in ending legalized racial segregation. The movie was nominated for four Golden Globe Awards and two Academic Awards and won both for the Best Original Song.

In 2015 he went on with appearing on TV and was noticed by CBC during Black History Month and regarded as one of the most potent black Canadian influencers.

Later on, James starred in biopic Race (2016) in the lead of Jesse Owens. This African-American was a track and field sprinter who broke four records on the 1936 Olympics in Nazi Berlin, defying Hitler himself. James garnered the Canadian Screen Award for this role as a leading actor.

Movies kept on alternating with TV works, and in 2017 he played in the FOX short series Shots Fired. However, in 2018 Stephan James featured Barry Jenkins’ (Moonlight, Medicine for Melancholy) If Beale Street Could Talk, which was marked with several Oscar nominations, and Homecoming — web television series. In Homecoming, he worked alongside Julia Roberts and received her approval of his performance in a podcast-based series. Moreover, he was noticed again by Golden Globe critics.

James’s next work is announced - it would be a supporting role in an action movie 17 Bridges, which is about to be released in July.

Stephan James is super quiet about his relationship. Still, nothing is known about the rising star's affairs. James keeps his social media accounts extraordinarily professional and even under the photos from various events writes only about his gratefulness to his colleagues.

However, Stephan is no gay and was seen with a woman several times. Her name is Kaila Dickson, and she was photographed holding hands with James on a romantic dinner. Later on, they attended the Golden Globe Awards Post-Party together and acted like a couple: Stephan's arm was seen at Kaila's lower back. Right now there is only this little information since doesn't have a public account and don't tend to reveal whose girlfriend she is.

Taking everything into consideration, one might say that such an attitude is specific and unusual nowadays, and journalists have to respect celebrities' secrets, even if the readers are really intrigued to learn more.

Aside from his love-life, James is pretty undisguised. The media has some facts available, for instance, Stephan’s dream role. He would be thrilled to play his favorite artist, Jean-Michel Basquiat, who was keen on neo-expressionism and became well-known in the 1980s. The arguments presented might prove that Stephan has a wish for playing historical figures, and that is exceptionally right. He agrees that acting in the based-on-the-real-story movies is useful and stimulating due to the fact he experiences various époques with their moral values and rules.

He is also a good sportsman not only on the screen, and he can indeed hold his own on the court. James participated in the NBA All-Star Celebrity Game for Team Canada, playing with Milos Raonic, Jonathan Scott and others, couched by Drake himself. It took him less than 20 minutes to score 10 points and help Canadians to win over Americans.

There are also Twitter and Instagram accounts of James with his fellow followers; however, the Instagram one is way more popular with almost 300 posts and more than 100 thousands subscribers.

The estimated net worth of Stephan James is $6.58 million.