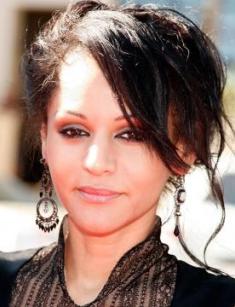 Persia White (fans also call her Bonnie's mother) is an actress, musician, and just a beautiful woman. When she was a child, the girl was walking along the streets of Miami with her mother, and an important figure in the Coconut Grove Children’s Theater stopped them and asked Persia: “Are you an actress?”. And she agreed without hesitation. Since then, White has been diligently improving her artistic skills; she sang, danced, and learned to play musical instruments. But it is worth mentioning that she first rose to prominence thanks to tattoos on her body rather than her talents.

Persia Jessica White was born on October 25, 1972, in the family of a Bahamian father and a white-skinned American mother. There is no specific information about her parents; it is only known that the mother was a teacher at school and an active fighter for the rights and freedom of citizens.

The future actress spent all her early childhood in the Bahamas, and at the age of eight, the girl moved to Miami. In school, she studied dancing, painting, singing, went to acting classes, and played in the children's theater. Reporters are not aware of other information regarding the early period of the actress's life.

According to film critics, the most successful role that made Persia famous is Lynn Searcy, one of the four heroines, in the TV series Girlfriends. The series was broadcast on CW for eight years (from 2000 to 2008). The movie was a success; it showered the life, feelings, achievements, and disappointments of four friends.

White also took part in the following projects: Blood Dolls, Red Letters. She played roles in several TV series, including NYPD Blue, Weird Science, Buffy the Vampire Slayer. However, the series, which played a significant role in the career and the personal life of the actress, is The Vampire Diaries.

The heroine of the actress, Abby Wilson, the mother of witch Bonnie Bennett, lost her mystical power, left her daughter with her grandmother, and fled the city to start a new life. The special attention was paid to her heroine in the third season. Then Persia met her future husband. The project not only provided a unique chance to play two roles of a mother and witch simultaneously but also helped Persia to reach the peak of popularity.

Although Persia became famous as a movie actress, she successfully fulfilled her potential in the world of music. From childhood, White was fond of music and studied singing in Miami.

White’s credentials proudly include the participation in the rock band XEO3, where she was a soloist. She worked as a composer in the short movie Revelation.

The Vampire Diaries not only made the actress very famous but also started a new chapter in her personal life. There is little information about her first marriage. Persia White has been married to musician and actor Saul Williams for only a year. The wedding took place in 2008 on the actor’s birthday, and Persia gave birth to daughter Mecca White in this marriage. The couple preferred not to tell the reasons for the breakup, without bringing it up for discussion.

The new lover of the actress was vampire Klaus, the villain whom the fans of the series The Vampire Diaries loved. Joseph Morgan and Bonnie's mother met on the set of the third season in 2011. Since then, viewers have watched with great interest the relationship of the couple who had a significant age difference. Persia is nine years older than her beloved man.

On July 5, 2014, the couple finally broke the illusions of fans, having celebrated a wedding in Jamaica. The lovers took vows, being surrounded by 26 close relatives and friends. The bride wore a Vera Wang dress with a veil, and the groom appeared in a silk tuxedo suit with a bow tie, which Joseph proudly told the paparazzi after the ceremony.

The fact is that the actor tied this bow tie himself for the first time. The reporters wrote headlines that “The couple celebrated a beach wedding." The main reason for the couple to chose the island as the venue for the ceremony was the fact that they both were born and raised near the sea.

In November 2017, Kenny Young’s movie You Can't Fight Christmas premiered, in which the actress played one of the leading roles. Persia is also known for her peremptory attitude towards veganism; she is an ardent fighter and animal rights advocate, a member of PETA, Global Green USA, and the Sea Shepherd Conservation Society. Another proof of her love for nature was the co-production of a documentary about animal cruelty.

Persia actively communicates on Instagram. The actress’s page has a lot of subscribers and fans, and she mainly posts photos together with her lover Joseph Morgan. The 8-year age difference does not cause any problems for the couple. The actress looks young, being up there with her husband, and every young girl can envy the trim figure of Persia.

It is worth mentioning that the body of Persia became famous for a large number of tattoos, which she gladly demonstrates wearing revealing dresses. Someday she puts on a mesh panel gown, where people can see the tattoo on her flat stomach, then the woman wears a sunback dress, underlining the waist tattoo.

In the film industry, she has worked not only as an actress but also as a drama producer, director, and composer of a short film. She has also participated in the voicing of several projects.