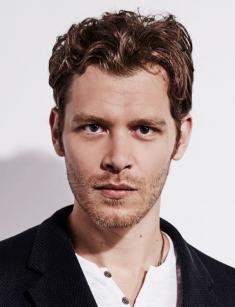 Fans of vampire sagas know the name of the young English actor Joseph Morgan, who won the audience's recognition, playing in the popular TV series The Vampire Diaries and The Originals. The actor became a part of the well-established cast and took the place of one of the most favorite characters of the viewers.

Joseph Morgan (born Joseph Martin) was born on May 16, 1981, in the capital of Great Britain. When Joseph was only a few months old, his family moved to Swansea, the second largest city of Wales. After graduating from Morriston Comprehensive School, he enrolled at the Central School of Speech and Drama in London, where he participated in many non-professional productions.

The beginning of Joseph's acting career was difficult — there was a period of frustration and uncertainty about whether he had made the right career choice. The actor scraped by playing in little episodes of unpopular television series and was already thinking about changing his profession. In 1996, Joseph got a feature role of Matthew Williams in the television series Silent Witness. Then he got minor parts in television films Eroica and Henry VIII.

In 2003, Joseph got lucky. He was offered a part in the movie Master and Commander: The Far Side of the World, which won an Oscar. The role was insignificant, but he was lucky to work on the set with Russell Crowe and Paul Bettany.

And in 2004 he had an opportunity to work with such stars as Anthony Hopkins, Angelina Jolie, Colin Farrell on the epic historical drama film Alexander, based on the life of the Macedonian general and king Alexander the Great directed by Oliver Stone. The movie failed at the box office, and critics did not receive it well, but it gave Joseph Morgan invaluable experience of working with recognized talented actors.

In the period up to 2010, he had several roles in little-known television series, and then he got lucky again and was invited to play the main part in the British TV miniseries, Ben Hur. The television series did not receive proper attention from the audience, but became the starting point in his popularity: Morgan returned to the big screen.

In 2011, the actor was blessed with good luck. In the auditioning process for the role of vampire Klaus for the television series The Vampire Diaries, producers Julie Plec and Kevin Williamson had to choose out of more than 200 actors, and they gave the part to back then little-known Joseph Morgan. In the second season, Morgan appeared on the show as a guest, and in the third he played along with the main characters.

This is a series based on the popular book series of the same name written by Lisa Jane Smith, telling the story of a girl, Elena Gilbert (in the series her role is played by Nina Dobrev, an actress of Bulgarian origin from Canada), living in the invented town of Mystic Falls, inhabited by mystical creatures. The girl falls in love with a young man Stefan Salvatore (Paul Wesley), who turns out to be a 162-year-old vampire. Soon his brother, Damon Salvatore (Ian Somerhalder, known by the television series Lost), comes to town.

Elena becomes the center of a love triangle and the bone of contention between vampire brothers because she reminds them of a girl from their past, Katherine Pierce, whom they both loved, and who was the cause of the сentury-old feud of two brothers.

Joseph Morgan in The Vampire Diaries plays the part of an Original Vampire Klaus Mikaelson, the mighty and the furious. The role of his brother, Elijah Mikaelson, was played by the New Zealand actor Daniel Gillies. Initially, the character of Niklaus Mikaelson was introduced to the plot of the series for a dazzling confrontation with Damon Salvatore. And Joseph Morgan coped with this task brilliantly. He got an army of fans all over the world. Critics also did not leave him unnoticed — in 2011 he received the Teen Choice Award in the category Choice TV Villain.

In March 2017, the final episode of the 8th season of the beloved series was released.

The popularity of The Vampire Diaries forced the authors to continue the story, and in 2013 the spin-off of the show, The Originals came out, focusing on the story of Niklaus "Klaus" Mikaelson, which brought Joseph Morgan People's Choice Award in the category Favorite Actor In A New TV Series.

The enormous popularity of Joseph Morgan encourages a lot of rumors about his personal life. Most of them are far from reality. He was said to have been in love with a number of his colleagues.

At one time his name was often mentioned next to Claire Holt's, a colleague on the set of the TV show The Vampire Diaries, (in the series she plays the role of Rebekah Mikaelson). The information turned out to be fake. Joseph was then said to have had an affair with Candice King (Caroline Forbes in the television series The Vampire Diaries). The actors played passion on the screen so convincingly that the audience decided to take it over into real life. But this relationship turned out to be a fantasy of their fans as well.

It is known only that his girlfriend for some time was Phoebe Tonkin, an Australian actress who played the role of the werewolf Hayley Marshall in The Vampire Diaries and The Originals. During the filming of Ben Hur, Morgan went out with Emily VanCamp (she played one of the leading roles in the television series Revenge) for a short period. The couple broke up, unable to withstand the rhythm of life connected with a tight acting schedule.

But the hand and heart of Joseph got another character of the series The Vampire Diaries, Persia White, a skinny brunette, who played the role of Abby Bennett-Wilson. They met on the set of the third season of The Vampire Diaries. At the time of meeting her, Joseph was 32 and Persia 41. In May 2014, the couple announced their engagement with the words:

"We are very grateful to those of you who have supported our wild, creative and passionate relationship. We managed to find a very rare and valuable thing-true love. We wish you the same."

Their wedding took place on July 5, 2014, in Jamaica. The hearts of millions of fans were broken. The wedding took place in a private, intimate atmosphere on the ocean coast in the presence of only 26 guests. Among the guests were only close relatives, the best man of the groom was a longtime friend of Joseph, actor Matt Ryan, known for his role as Constantine in the television series under the same name.

The couple doesn't have any children yet, but Persia has a daughter, Mecca, from her previous marriage with Saul Williams.

Joseph Morgan is actively communicating with his fans on social networks. He has 2.4 million followers on Instagram.

His last appearance in public was at a reading of the pilot episode of TV series about X-Men under the working title Gifted. However, his participation in this series has not been confirmed.