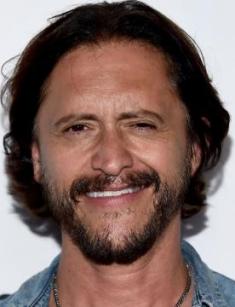 Clifton Collins, also credited as Clifton Collins Jr., is an American actor who became internationally famous after the movies Traffic, Mindhunters, and Road Dogz. All in all, the artist has appeared in more than 100 movies and series; many of his roles have been major.

Clifton Craig Collins Jr. was born in Los Angeles. The boy’s family was close to arts and stages: his ancestors were Mexican musicians and Spanish dancers. Clifton’s grandfather, Pedro Gonzalez-Gonzalez, was famous as a number one among Latin-Americans in the popular westerns in the 1950s. Finally, Collins’s uncle and aunt were engaged in show-business.

Little Clifton dreamed of becoming a movie star. His relationship with the starry grandfather was warm; the artist even invented a stage name “Clifton Gonzalez-Gonzalez” in his honor. Pedro was lucky to see his grandson’s triumph; he appreciated his choice of a pseudonym. The actor kept it until the grandfather’s death.

The 18-year-old man debuted on the screen in TV series, many of which were popular among the audience: Freddy’s Nightmares, The Flash, Walker, Texas Ranger, and so on. The fantastic action Fortress brought a more notable role; one could also see Collins in the musical The Stoned Age, the thriller One Eight Seven, the action The Replacement Killers, the fantasy comedy The Wonderful Ice Cream Suit.

The youth horrors My Sweet Killer and Light It Up increased the number of the artist’s fans, but the real recognition came with the military drama Tigerland, the crime thriller Traffic, and the action Road Dogz. Movie experts called Collins a chameleon actor for his ability to personify any character and feel their emotions.

Since that time, the artist has been showered in new offers. He took part in the crime thriller I Witness, the sports drama Undefeated, the psychological thriller Mindhunters, and the biopic drama Capote.

The audience appreciated Collins’s work in the police movie Dirty, the drama Little Chenier, the crime detective Horsemen, and the fantastic action Crank: High Voltage. The more the actor is shooting, the more excellent projects are worth being mentioned. He participates in four or five movies simultaneously, and many premieres have occurred in recent years: the black comedy Hellbenders, the series Red Widow, the comedy Freeloaders, the horror Stung, and the psychological thriller Hacker.

In 2016, the thriller Triple 9 and the comedy Punching Henry were released. The actor did not stop working and appeared in the musical drama Weightless and futuristic series Westworld.

Charming and handsome, the actor has had many romances. In 2002, he began to date the actress and singer Taryn Manning; they would split up and reunite several times. When they separated, the man was seeing the actresses Bridgetta Tomarchio, Emmanuelle Chriqui, and Sarah Blondin.

At the end of November 2011, the actor married his girlfriend, the American actress Megan Ozurovich; the couple had been dating for two years and divorced eventually. In 2017, Collins married his second wife, the actress Francesca Fisher-Eastwood.

In 2015, Clifton tried himself as a writer: he co-created the book Prison Ramen: Recipes and Stories from Behind Bars with Gustavo Alvarez.

Today, the artist is full of energy and continues to work on many projects. 2019 has been marked with Once Upon a Time in Hollywood, Waves, Honey Boy, and Veronica Mars; new movies are in post-production. Fans can learn the latest news on the celebrity’s official Instagram page.