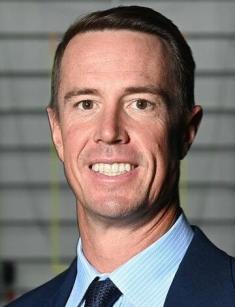 Matthew Thomas Ryan who was born on May 17, 1985 is an American professional football player. Also known as Matty Ice, he is a quarterback for the Indianapolis Colts football team.

The NFL star hails from Exton, Pennsylvania. His parents' names are Michael and Bernice. Both of them are of Irish descent. Matt also has two brothers and one sister. The star's uncle and cousin were football players as well. Matt became interested in the sport in his teenage years. Besides football, he also played basketball and baseball in high school. Matt's brother Michael is a football player, too.

Matt started playing football at William Penn Charter School. His results were fairly average, but nevertheless he was recruited by Purdue University, Georgia Tech and Boston College. Matt chose the latter and was very successful on and off the field, winning the freshman male scholar-athlete award and becoming one of the best quarterbacks of the school.

In 2008, Matt was picked by Atlanta Falcons. During his time on the team, he played with some of the best receivers, including the legendary Julio Jones. Matt also faced Aaron Rodgers and admitted that he was a great competitor. In 2018, he signed a 150 million dollar contract extension with Atlanta Falcons, which made Matt the highest-paid player in NFL history at the time.

In January 2022, Matt was rumored to replace Ben Roethlisberger in Pittsburgh Steelers after the latter had retired, but in March of the same year Atlanta Falcons made the decision to trade Ryan to the Indianapolis Colts. It disappointed Baker Mayfield who was another candidate for the trade. Matt's time in Indianapolis Colts was far from ideal. In October 2022, Ryan made news when the team's coach announced that he will bench Matt for the rest of the season. Despite the fact that it happened after Ryan sustained a shoulder injury, the coach stressed that the move was not related to that. The football player expressed his disappointment in the decision, but also mentioned that he understands that the coach is doing what is best for the team. Matt admitted that his performance in the first seven games of the season was not satisfactory.

During his 15 years' career as a football player, Matt's stats include 61743 yards and 376 touchdowns. Matt's current salary is estimated at 18.7 million dollars.

In 2011, Matt married his girlfriend Sarah Marshall Ryan. Born in Portland, Maine, she is a former high school basketball player. Sarah currently works as a sponsorship sales consultant. The couple has two twins named Johnny and Marshall. Matt often shares photos of them on his Instagram page.

Besides his passion for football, Matt is also an avid golf player.

During his career, Matt won 21 awards, including the NFL Most Valuable Player, Bert Bell Award and ESPY Award: Best Breakthrough Athlete. He also set up more than 10 NFL records.