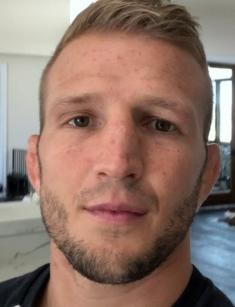 Tyler Jeffrey Dillashaw is an American mixed martial artist, the UFC Bantamweight Champion. As of 2018, his credentials include 16 victories and three losses.

Tyler was born in the small town of Sonora, California, but soon his parents Hal and Janice Dillashaw moved to Angels Camp, where the future champion spent his childhood. The young man was fond of football and wrestling. He attended Bret Harte High School, and later, thanks to his sports hobbies, could enroll at California State University, where he was granted a scholarship.

Tyler achieved the first success in school, where he was a four-time sectional qualifier and two-time California Interscholastic Federation (CIF) state qualifier. During his freshman year at the university, the young man set a personal record.

In 2006, Dillashaw went to Ukraine to work on his wrestling skills, where he lived and trained for a year. It gave impetus to his sports career, but then Tyler did not compete at the international level and had not gained wide popularity.

Dillashaw thought about a career in MMA after he graduated from university, and Urijah Faber, a former WEC champion, invited him to train. Tyler joined Team Alpha Male. As a professional fighter, Dillashaw made his debut against fellow pro debutee, Czar Sklavos in March 2006. Dillashaw used his superior wrestling to earn a dominant unanimous decision win. Later, Tyler picked up two more wins and accepted an invitation to the fourteenth season of The Ultimate Fighter.

In the first episode, Tyler defeated Matt Jaggers via TKO, which was followed by wins in the fights against Roland Delorme and Dustin Pague, and T.J. Dillashaw won the Ultimate Fighting Championship. T.J. Dillashaw signed the contract with the UFC before participating in The Ultimate Fighter. He made his UFC debut in December 2011 in a fight against John Dodson but lost via TKO.

His sophomore UFC outing came in 2012. It was a successful and bight fight, in which Tyler used his wrestling skills. His rival Walel Watson was much larger than T.J., but Dillashaw managed to control him on the ground nearly submitted the fighter. So, he won the bout via unanimous decision.

Six months later, he defeated Vaughan Lee, winning the match by submission in the first round. His rival Renan Barão turned out to be a hard nut to crack. At that time, the latter was already an experienced fighter but lost to T.J. which shocked his fans. As a result, the American athlete became the new UFC Bantamweight champion and received bonuses for Fight of the Night and Performance of the Night.

Renan said that he wanted to take revenge, but the day of the weigh-ins, Barão had to be admitted to the hospital as a result of his attempts to cut weight. He was replaced by Joe Soto who was defeated via knockout in the fifth round. Later a rematch with Barão was rescheduled again because Tyler broke his rib. The fight eventually took place in 2015, and T.J. won and retained his title.

The same year, Dillashaw left Team Alpha Male. The reason was the disagreement which made his coach Duane Ludwig leave. Tyler did not want to work without his main mentor and also announced his resignation, provoking a sharp discontent among former colleagues.

Cody Garbrandt was especially angry about him, and in every interview, he recalled T.J.’s leaving and called him a traitor. In response, the athlete said that the group already had enough problems, and accused the team coaches of cashing in on the fighters.

The flash-point of Dillashaw and Garbrandt’s conflict was their fight for the UFC Bantamweight Championship. The organizers took advantage of their personal enmity and promoted the upcoming battle. T.J. won it, but Garbrandt lost with honor and said in an interview after the bout that his opponent was a bad man but an excellent fighter.

In 2016, Tyler was defeated by Dominick Cruz, which later was called the "dark spot in his career." The revenge did not take place because Cruz left the UFC, but in 2018 he decided to resume performances and scheduled a rematch with T.J. again.

The athlete is married to Rebecca. The couple met on the Internet; moreover, Tyler wrote to the young woman he liked. She did not answer for a long time, but then liked the photo on his page. They celebrated the wedding in 2014, and the first child was born three years later. The married couple keeps their private life from prying eyes and rarely appears in public together, but T.J. willingly posts photos of his wife on Instagram.

Rebecca Dillashaw graduated from the University of California with a degree in Communication and Management and became her husband’s manager. She admitted in an interview that she had never watched his fights and was even afraid of watching the results. She was too worried about Tyler, so after the competition, he always calls her first.

The athlete is 5.54 ft. (169 cm) tall, and his weight is 134.48 lbs. (61 kg). T.J. carefully takes care of himself and does not appear in public without a neatly arranged hairstyle. Like most MMA fighters, he is a fan of tattoo art and has a sleeve tattoo. Tyler made the latest tattoo in the shape of a griffin in honor of the victory over Cody.

In August 2018, the American athlete walked into the ring against Garbrandt, but the latter could not take revenge. T.J. won an easy victory defeating the fighter via knockout in the first round. Dominick Cruz who returned to the ring after a 2-year hiatus challenged Tyler, but T.J. suddenly announced that

"Cruz should earn the right to participate in this fight."

According to Dillashaw, after a break, Dominick has not kept fit and has to train a lot to become a capable opponent. Now the fighter is training hard, but he is already thinking about what he will do after retirement from the UFC.

“I want to fight until I have enough strength to do it. - Tyler said in an interview. “I’ll earn a lot of money and retire keeping a big smile on my face.”

In 2019, Dillashaw was scheduled to face Henry Cejudo on January 26, for the UFC Flyweight Championship. However, after that pay-per-view event was canceled, the fight was rescheduled on January 19, 2019. Dillashaw lost the match via TKO in the first round.

T.J. Dillashaw’s net worth is reportedly around $1.3 million.