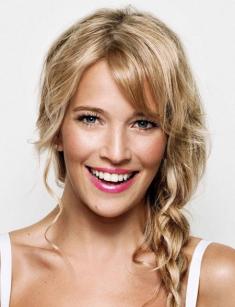 Luisana Lopilato – an Argentine model, an actress and a singer, who became famous after playing the main role in the series "Chiquititas". She was world famous when she played Mia Colucci in the telenovela "Rebelde Way" and became a member of the musical group "Erreway".

Luisana Loreley Lopilato was born on May 18, 1987, in the Argentine city Buenos Aires in the family of Eduardo and Beatrice. The youngest of three children grew up with her brother Dario and her sister Daniela in city vicinities near the Hour Park.

The girl received her first commercial role at the age of 6 after the casting Director offered Luisana an audition for advertising noticing her on a walk with her mother. Despite the fact that she began her career as an actress, the girl continued to go to an ordinary secondary school, instead of taking lessons on the set.

Luisana Lopilato made her television debut in the series "My family is a drawing" in 1995. The famous Argentine producer Cris Morena took the actress in the role of Luisana Maza on the popular TV show "Chiquititas" in 1995. Her brother Dario also took part in the filming.

She appeared in the mini-series "Chiquititas, la historia" and the additional film "Chiquititas: In a Corner of This World" in 2001. Lopilato received the main role in the Argentine drama film " Un amor en Moisés Ville " the same year. The producers of the show were so impressed with the acting of the girl on casting that they asked her to learn English to continue working in the project, because it was hard for Luisana to have conversations in an unfamiliar language.

Cris Morena invited the young actress to the casting of the soap opera "Rebelde Way" in 2002. Luisana easily got the role of one of the main characters of Mia Colucci. The series was about rich teenagers who decided to form a musical group. During the filming of "Rebelde Way" the actors of the show created a real group, which was called "Erreway".

A melodramatic musical about the musical group "Erreway: 4 caminos" was released in 2004. Luisana starred in the television series "Married... with Children", an Argentine remake of the eponymous series from America in 2005. The girl played Paola Argento and Dario played the role of her screen brother.

The actress returned to work with her mentor Cris Morena to participate in the Argentine telenovela 2006 "Alma pirata", in which Benjamin Rojas, Mariano Martinez and Nicolas Vazquez starred too. In 2007, Luisana Lopilato appeared in the television comedy "Boss", who was nominated for The Martín Fierro Awards, and also became one of the organizers MTV Latin America Awards.

The famous Argentine actress Alicia Zanca presented Luisana in a theatre production "Harlequin" the same year. The girl was nominated for the ACE Awards for her role in the play, after which she received the main role in the musical "Cinderella".

Lopilato starred with her brother Dario again in the telenovela "Atracción x4" in 2008. Her former colleagues on the set Camila Bordonaba, Gabriel Goity, Rodrigo Guirao Díaz and Elias Vinoles starred in the series. Luisana voiced an animated сomedy "Plumíferos", which was released only 2 years later the same year.

The actress starred in the film "Papa por un dia" in 2009, and then entered the list of "100 Sexiest Women in the World" according to the FHM magazine in Spain. The girl loves to show her gorgeous figure with candid photos in a swimsuit or underwear not for nothing. Luisana played a negative character in the series "El Lobo" in 2011.

Lopilato received a role in the drama series "Terapia ", in an Argentine remake of the Israeli project "BeTipul" in 2013. She received the praise from critics for the image of the girl Valentina, struggling with cancer. The actress was nominated for the Martín Fierro and Tato Award for her participation in the series.

Lopilato and her colleagues in the film Benjamin Rojas, Felipe Colombo and Camila Bordonaba formed a pop rock band "Erreway" during the filming of "Rebelde Way". The band performed most of the show's music and released 3 studio albums: "Señales" (2002), "Tiempo" (2003) and "Memoria" (2004).

Luisana left the band in 2007, after which the rest of the band went on a tour of Spain. Later, the singer signed a contract with Universal Music Group to record a solo album, for which she wrote songs with her sister Daniela.

Lopilato recorded 2 albums with soundtracks for the series "Atracción x4" during 2008 and 2009. Both discs received a gold certification in Argentina.

Luisana Lopilato was in a relationship with her "Rebelde Way" and "Erreway" colleague Felipe Colombo from 2002 to 2005. After parting with Colombo, she began dating with the actor Mariano Martinez and got engaged to him a year later after the beginning of the affair. The couple broke up at the end of 2006 and did not legalize their relationship.

Lopilato entered into a relationship with the tennis player Juan Monaco soon after the parting with the actor. However, it was clear that the girl secretly met with the Сanadian singer Michael Bublé at the end of 2008. Their relationship began after a joint going to the theatre for a play, in which her brother Dario was a participant.

In December 2016, her 3-year-old Noah was diagnosed with liver cancer. Luisana and her husband decided to pause their career and devote all the time to the treatment of the child. The celebrity unveiled the sad news on "Instagram" and asked her fans and viewers for respect, understanding and support for their personal lives.

In February 2017, happy parents reported that their son's illness was treatable and now Noah is completely healthy.

In 2019, the actress's filmography will expand after the release of two films with her participation - the Spanish thriller "Predeterminados" and the American comedy melodrama "Fair market value".