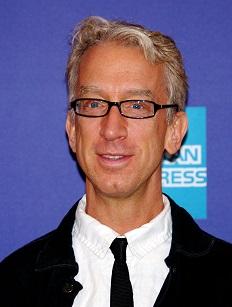 In spite of big successes in acting, Andy Dick leads a horrible life: he is a real drug addict. His addiction dates back to the early 2000s and he can not get rid of this problem even nowadays. Let’s know hos drugs and alcohol affected Dick’s career!

Andy Dick's motherland is Charleston. His biological parents denied from taking custody over little Andy, and he was sent to an orphanage. Dick was lucky to be adopted by a decent couple of Sue and Allen.

Dick's new dad was a Marine, while his new mom worked as a teacher.

Being a kid, Andy, with his adopted family often changed places of living, eventually settling down in Chicago – it happened in 1979. There he enrolled at a high school where impressed teachers by his acting talent. Besides, he dreamt of becoming a musician. He was a real star of school's plays, concerts, performances. In 1984 Dick completed his school education.

His classmates often joked at him because of a surname – but Andy didn't resent due to his good sense of humor. Once, he appeared at a school' party wearing a costume of men's genital organ.

The year 1992 is thought to be the beginning of Andy Dick's television career – he got the role on the show The Ben Stiller Show and worked there until 1993.

1994 was marked by Dick's appearances in one episode of the program entitled The Nanny and in the picture named Get Smart. 2001 brought him roles in the TV shows Go Fish and Less than Perfect. Besides, in 2001 his own program entitled The Andy Dick Show was shown on screens for the first time. It lasted for only one single season, canceling in 2003. The following year, the actor was among actors of The Assistant.

Around that time, the celebrity decided to take part in Celebrity Poker Showdown, eventually holding the fifth place. In 2013 he was seen taking part in Dancing With the Stars being paired with Sharna Burgess – the partners finished 8th.

Speaking about pictures he took part in the recording of, there is the movie Double Dragon (based on the game of the same name) in Dick's filmography. In 1994 he was cast of the comedy picture In the Army Now – its plot is about a war.

In 1999 fans could watch a new project featuring Andy Dick – the movie Inspector Gadget. The following year was marked by Dick's joining the cast of Road Trip.

In 2002 he starred in the music video for the song ‘Envy’ by Ash. In 2003 Dick played a professor in the picture Old School and was seen playing in The Hebrew Hammer.

Apart from acting in projects, Andy Dick has tried out directing and producing pictures. So, in 2006 he released his first movie entitled Danny Roane.

Besides, he did some voiceover work.

Andy Dick’s net worth is evaluated at $3 million.

Andy Dick has a long list of ex-girlfriends. Generally, he is that type of men who had been romantically involved with lots of women but eventually ended up alone.

The actor has been married with Ivone Kowalczyk – the two tied the knot in 1986. However, their affair destroyed because of Dick's career, and the spouses filed for divorce, officially separating in 1990.

In 1988 they welcomed a son named Lucas.

Having parted ways with Ivone, Dick began dating Lina Sved. Although they have never been married, the woman gave birth to their two kids.

Also, in the list of his former partners, there are Enger Ebeltoft, Lisa Donatz, and Brande Roderick, among others.

In 2013 the actor officially announced his affair with Jennifer Gimenez – before starting a relationship, the two had been good friends. However, their alliance didn't last more than a couple of months. The reason for their split up became Dick's career, unsurprisingly.

According to Dick's admissions, he leads a struggle with alcohol and drug addiction already for several years. He has visited lots of clinics and referred to many doctors to solve this severe life-threatening problem.

In 1999 Dick was suspected in killing his friend David Strickland. However, later it was revealed the latter had committed suicide.

The same year, the actor was blamed for drug possession.

In 2004, while being high, Andy Dick came to a local café and demonstrated his ass and was subsequently arrested.

In 2008 a girl referred to police accusing Dick of sexual assault. Two years later he was charged with touching a bartender at a local bar. In 2018 another woman suffered from Dick's sexual assault.

In 2017 Andy Dick was to appear in the picture entitled Raising Buchanan. However, its directors decided to get rid of him because of his horrible actions. So, Dick touched the genital organs of his colleagues and showed his ones.