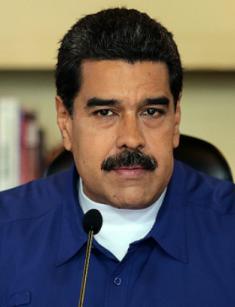 Nicolás Maduro is the current President of Venezuela with a long and rich political past.

The beginning of his rule fell on a difficult period of economic crisis in the state, which led to national riots due to enormous inflation.

Nicolás Maduro Moros was born on 23 November 1962 in Caracas, Venezuela. The father of the future politician was a prominent trade union leader and a member of The United Socialist Party of Venezuela. Besides the boy, there were three daughters in the family: María Teresa, Josefina, and Anita.

Maduro referred to himself as a man of mixed race: in Maduro family history there were native South and North Americans, as well as Afro-Latin Americans. Besides, his paternal grandmother and grandfather were Sephardic Jews, who converted to Catholicism.

In his youth, Maduro had a joyful personality and was interested in music: among his favorite musicians were The Rolling Stones and Led Zeppelin. The future politician even wanted to create his own band and become a rock musician.

His first experience in the political field was his membership in high school's student union, even though he never graduated from high school.

In 1983, during the unsuccessful presidential campaign of José Vicente Rangel, Nicolás was his bodyguard, in 1987 he attended a one-year course at the Escuela Nacional de Cuadros Julio Antonio Mella. In four years Maduro started working as a bus driver for the Caracas Metro company. He held this post for seven years, gradually becoming an unofficial trade-unionist representing the bus drivers of the Caracas Metro system.

In 1993, together with a group of people, Nicolás Maduro visited Hugo Chávez, who was held in custody after a failed coup d'état attempt. From this moment on, Maduro became one of the activists calling for the release of Chávez. Later the politician joined The Movement for a Fifth Republic (MVR), which supported Hugo's presidential campaign of 1998.

In 1998, Maduro started on his way to big politics, becoming a candidate for the Republic's Congress, and on January 23, 1999, he already held the parliamentary fraction of the MVR in the Chamber of Deputies of Venezuela. A bit later, the politician was elected to the National Constituent Assembly in 1999, which developed a new constitution of the Capital District of Venezuela. Maduro climbed the career ladder rapidly: in 2000 and 2005, he was elected to the National Assembly, representing the country's Capital District. Besides, Nicolás became the Speaker of the Assembly, and the lack of higher education did not prevent him from getting this post.

In 2006, president Hugo Chávez asked Maduro in person to become the Minister of Foreign Affairs, replacing Alí Rodríguez Araque, who was appointed Secretary General of the Union of South American Nations. Besides, on December 8, 2012, Hugo Chávez, already terminally ill with the oncological disease, announced that if he was to leave the post of the president, he should be succeeded by Nicolás. This way, Maduro, still holding the position of the Minister of Foreign Affairs, became the Vice President of Venezuela.

After the death of Chávez on March 5, 2013, the politician assumed the powers and responsibilities of the president until the presidential elections, held in April. The international media doubted his right for this post due to the fact that Chávez did not manage to swear in for the fourth presidential term. The Supreme Court dismissed these accusations as groundless because, by the time of his death, the president was already in office and the state's government had administrative continuity. That meant that Maduro had a right to assume the powers and responsibilities of the president.

On April 14, 2013, early elections took place in Venezuela, according to the Constitution of Venezuela in case of the death of the president in the first four years of the term, a presidential election had to be held within 30 days of the president's death. Maduro narrowly defeated the opposition candidate Henrique Capriles with just 1.5% of the vote separating the two.

The Argentinian journalist Andrés Oppenheimer, an old critic of the rule of Chávez, stated that Maduro had an advantage in the elections because the mourning of the previous president contributed to Maduro's promotion. Meanwhile, Capriles was given only four minutes for promoting his policies. Nominally, Maduro had the same amount of time but to it were added ten minutes of announcements from state service and the government.

As a result, Capriles refused to recognize the outcome as valid because, according to his data, more than 3,500 irregularities were detected during the voting process. Maduro agreed for a recount, but the National Electoral Council (CNE) rejected this idea, citing the automatization of the counting process, and assuring everyone that recounts were initially part of the procedure. On April 19, 2013, Nicolás Maduro was inaugurated as President.

The politician "took" the country in poor condition: with power, he got public debt and 13% deficit in the budget. However, at a time when oil prices were high, he managed to improve the situation, and the GDP of Venezuela grew by 1,6%. In October, Maduro approached the National Assembly with a request for special powers, which he would use to fight corruption. Ninety-nine parliamentarians supported the politician. Out of a total of 165 members, this number was enough to pass the initiative.

In November, the president took measures, which turned out to be doubtful, considering the results. After arresting the owners of household electrical goods chain stores, the confiscated products were sold for a cost ten times lower than the original. The police managed to control the national enthusiasm only partially: a lot of the stores were robbed.

The next object on the way to fight corruption became the Daka trademark. Nevertheless, neither the arrest of the owners nor confiscation of the goods could handle the deficit and the inflation that exceeded 50%. The problematic situation worsened because of the criminal outbreak. As a result, in February of 2014, widespread civic actions began taking place.

The activists demanded better security, and also proclaimed the economic crisis to be not the just the result of the government mistakes, but the government policy itself. The actions ended in clashes with security forces, which, in their turn, led to new protests.

In response, Maduro made a speech on a state television channel and urged the compatriots not to fall for provocations. Besides, the president stated that the opposition was planning a coup d'etat.

2014-2015 were difficult years in the history of Venezuela, especially when it came to the economy: the fall of world oil prices resulted in the increasing inflation, and by 2016, the government had nothing left to do but devalue the Bolivar (the currency in Venezuela).

The surprising results of the National Assembly elections of 2015 were the consequences of economic difficulties and regular protests: representatives of the opposition took the majority of its seats. Therefore, the parliament turned into a political battlefield, and only the support of the Supreme Court of Justice of Venezuela was Maduro's savior for a long time.

In 2016, there was an attempt to overthrow the president from his post: The National Assembly of the country accused Maduro of arranging a coup d'etat. In October, the vote for the beginning of the impeachment procedure took place. The president pleaded the Vatican for help, and the Pope sent the Cardinal Secretary of State for negotiations with Venezuelan opposition. It resulted in the suspension of impeachment and the release of five opposition politicians from custody.

Nevertheless, on January 9, 2017, the majority of deputies in the voting process decided to announce that the president should step down due to dereliction of duty. The Supreme Court came to Maduro's rescue once again, ruling that the parliament didn't have the right to oust the president.

President of Venezuela is listed among the tallest leaders of the world's governments; his height is 6 feet 23 inches (190 cm).

Nicolás Maduro was married twice. Adriana Guerra Angulo became his first wife. The marriage lasted from 1988 till 1994, and during that period, the couple had the only child of the president, Nicolás Maduro Guerra. He is also commonly known as ‘Nicolasito’ and, like his father, he grew up to be a politician: for example, he was elected into the Constituent Assembly of Venezuela. He is also the Coordinator of the National Film School of Venezuela.

In 2013, some changes took place in the personal life of the president, and he married again. Cilia Flores, an attorney, and a politician became the second wife in the life of Maduro. The romantic relationship between Cilia and the future president started back in the 1990s when Flores was the lawyer of Hugo Chávez. The couple doesn't have any children together yet. However, Maduro became a stepfather for Cilia's three children from her first marriage.

To inform and communicate with citizens, the president of Venezuela uses his official Twitter account. The blog is public: the texts and photos are devoted to the political life of Maduro.

Now, despite the military crackdown of opposition protests and several preventive and punitive measures, mass actions of the opposition members continue.

On August 4, 2018, there was a parade commemorating the Bolivarian National Guard's 81st anniversary. During the ceremony, someone attempted to assassinate Maduro-they tried to attack the president with drones laden with explosives. A group named Soldados de Franelas ("T-shirt Soldiers") claimed responsibility for the attack.

At the end of 2018, Maduro met with the president of the Russian Federation. During the public part of the meeting, Vladimir Putin condemned the terrorist attacks of the opposition but added that Maduro's actions should be directed onto the regulation of the relations with his political rivals. The integral part of the Russian-Venezuelan relations is still energy.

In 2019, Venezuela changed its laws of oil trade, according to the statement of Nicolás Maduro, all oil products from now on will be traded only for Venezuelan cryptocurrency, Petro. According to his words, such action is a step to break free from the influence of "Washington elite" currency. At the same time, the president announced that the minimum wage in Venezuela grew 2,5 times.