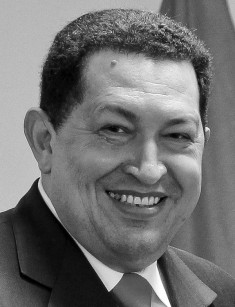 Some people say that to achieve good results a person needs unique condition, skills or equipment (it's not about Archimedes who threatened to move the Earth if there was the place to stand). But there is another category of people who against all the odds blow the beliefs of others sky-high with their examples. The biography of the Venezuelan statesman and political leader is a striking example.

The future speaker and leader of Venezuela Hugo Rafael Chavez Frias was born in Sabaneta, a small village in the state of Barinas. This event occurred on July 28, 1954. The boy was the second of seven children of Hugo de los Reyes Chávez and his wife, Elena Frías de Chávez.

Hugo spent his early childhood in the village of Los Rastrojos and left it with his older brother Adan after graduation from elementary school. The parents sent the boys to their grandmother in Sabaneta, where Hugo and Adan attended Daniel O'Leary High School.

When Chavez recalled his childhood, he often described it as "poor... [but] very happy". Then he dreamed of becoming a professional baseball player (this dream partially came true in his student years). After graduating from the High School, Hugo entered the Academy of Military Sciences. At the same time, he played baseball and softball, progressing with them to the National Baseball Championships.

Studying at the Academy, Chavez was interested in the life and political thought of the national hero General Simon Bolivar. Later he read his memoir The Diary of Che Guevara, and the ideas of the Latin American revolutionary inspired Hugo. Then Chavez drew attention to the poverty faced by working class Venezuelans and decided to change this social injustice in the future.

In 1974, the leadership of the Academy sent its students to commemorate the 150th anniversary of the Battle of Ayacucho, which took place during the Peruvian War of Independence. The head of state Juan Velasco Alvarado spoke at the commemoration. Twenty-year-old Hugo Chavez was strongly impressed by the president's speech about the need for military action in the interests of the working class because the ruling classes were corrupt.

Another significant event in Chavez’s life during his studies at the academy was the acquaintance with the son of the Supreme Commander of the Panamanian and National Guard, Omar Torrijos, and the visit to Panama. Velasco and Torrijos inspired Hugo. He based his ideas on these examples and saw the potential for military generals to seize control of a government. In 1975, Hugo graduated from the military academy as one of the top graduates of the year and joined the army.

During the service at a counterinsurgency unit in Barinas, the young man found a stash of communist literature (including the works of Karl Marx and Vladimir Lenin). Hugo kept a few books and read them in his spare time. These books further convinced Chavez of his left-wing views.

Two years later, in the state of Anzoátegui, Hugo’s unit fought with the Red Flag Party. After communicating with the captured members of the party, Hugo understood that there was corruption not only in the civilian government but also in the army. Hugo came to believe Venezuela's poor were not benefiting from the oil wealth.

As a result, in 1982 Chavez founded the Bolivarian Revolutionary Army-200 (later the Revolutionary Bolivarian Movement-200). The initial idea of the organization was to study the military history of the state as a source of military doctrine.

Later, political analyst Barry Cannon argued that the Revolutionary Bolivarian Movement-200 was the development of a new ideology that combined best ideas from past doctrines. In 1981, Hugo became a captain, and he taught during one semester at his university, sharing his thoughts with students and recruiting some of them.

Later, Chávez was sent by the leadership to the city of Elorza. Hugo had suspicions that this was a kind of exile since some senior military officers became suspicious of his actions. Chavez did not lose his head. Instead, he got acquainted with the Yaruro and Cuiva tribes, the indigenous tribes, that at that time belonged to the Venezuelan state of Apure.

Having established good relations with the Yaruro and Cuiva, Chavez realized that it was necessary to stop the oppression of the indigenous population by the citizens and introduce the laws protecting the rights of indigenous tribal peoples (which he would later achieve). In 1986, Hugo Chavez was promoted to the rank of major.

Two years later, Carlos Andrés Pérez was elected President. He managed to win the elections thanks to the promises announced during the election campaign. In particular, he promised to oppose the International Monetary Fund's policies.

However, Perez followed instead neoliberal economic policies supported by the United States and the IMF. Citizens of Venezuela were angered. People went to rallies, but according to the presidential proclamation, the military violently repressed all the protests. Chávez was in the hospital at that time. When he found out the news, he realized that it was time for a military coup.

According to Hugo’s plan, it was necessary to seize vital military facilities and mass media, capture Perez, establish Rafael Caldera (one of the former presidents of the country) in power. Everything was ready.

Nevertheless, the coup attempt of 1992 was not successful. Chavez's plan failed because of the small number of supporters, numerous betrayals, unverified data and other unforeseen circumstances. On February 5 of the same year, Hugo gave himself up to the government and appeared on television to call on the remaining supporters to surrender, saying that he had failed “for now.”

This event was covered in detail by the media around the world (articles with Hugo’s photos were in all major world editions), and the prisoner of the San Carlos military stockade became famous. These events affected Carlos Andres Perez too. In 1993, the president was convicted and dismissed for misdemeanors in office and embezzlement of the state budget for personal and criminal purposes. Caldera replaced him.

Rafael Caldera freed Hugo and his supporters, dismissed all charges, but banned from returning to the military. Chavez immediately went to promoting his ideas among his fellow citizens, as well as search for foreign support (at that time he got acquainted with Fidel Castro).

On his tour around Uruguay, Chile, Colombia, Cuba, and Argentina, Chávez found out from his companions that the actions of the current president, Caldera, did not differ from Perez’s actions. Hugo returned to his homeland, suspecting of something wrong.

Chávez realized that he could only seize power by force since the oligarchs would not allow him to win the upcoming elections. Nevertheless, Hugo decided to try to avoid armed conflicts and founded in 1997 a left-wing socialist party, the Fifth Republic Movement (later, the United Socialist Party of Venezuela).

In the presidential election of 1998, Hugo Chávez managed to outperform Rafael Caldera, Irene Saez, and Henrique Salas Römer. His inauguration took place in Venezuela in 1999.

The first presidential term lasted until 2001 and was marked by the repair of roads and hospitals, free treatment and vaccination, social assistance, introduction of the laws protecting the rights of indigenous people, and the weekly TV show Hello Mr. President, where anyone could call and discuss with Chavez urgent issues or ask for help.

The first presidential term was followed by the second, third and even short fourth ones. The oligarchy could not overthrow the people's favorite President Hugo Chavez, despite the coup in 2002 and the 2004 referendum.

Chavez’s fourth presidential term began in January 2013 and ended in March of the same year because of Hugo's death. Nicholas Maduro took the presidential power, and he became the next president of Venezuela. Hugo Chavez died at the age of 58.

Hugo Chavez married twice. The first wife was Nancy Colmenares, who gave birth to daughters Rosa Virginia (1978), Maria Gabriela (1980) and son Hugo Rafael (1983). After the birth of his son, Hugo broke up with Colmenares, continuing to take care of his children.

From 1984 to 1993, he had an affair with Herma Marksman, his companion. In 1997, he married and became a father again. His second wife Marisabel Rodríguez gave birth to daughter Rosines. In 2004, the couple separated.

In 2011 Chavez was diagnosed with cancer. Fidel Castro personally invited Hugo to Cuba to undergo a course of operations. Doctors detected malignant cells, and Hugo Chavez began to feel better. However, at the end of 2012, the disease had its effect on him again.

On March 5, 2013, Hugo Chavez died. The government did not disclose the details for a long time, but later it was announced that the cause of death was a massive heart attack. There were rumors that Chavez was poisoned by Americans or Francisco Arias Cárdenas, his former companion who became a defector.

Initially, the government planned to embalm Hugo Chavez, but this did not happen for particular reasons. Chavez's body was taken from the Military Academy, where he studied and taught, to the Revolution Museum. The farewell ceremony and the funeral took place there. The heads of delegations from different countries, including the United States (despite Chavez’s unflattering speech about the U.S. Government at the UN General Assembly), spoke at the funerals.

On March 7, 2016, the unveiling of Hugo Chavez statue took place in Chavez’s home village of Sabaneta. It was a gift from Russia and Vladimir Vladimirovich Putin.

"Some remains of steam have been recently discovered on Mars. It was water in the past. Scientists assume that once there was a civilization on Mars. Mars is very similar to Earth. It even has a similar orbital speed as well axis rotation. So, I have recently examined with a magnifying glass a photograph of the dead plane. The photo was sent from Mars by the American apparatus. And it seemed to me that I could distinguish three letters IMF on one of the Martian rocks. "

"Yesterday, the devil came here. And it smells of sulfur still today." 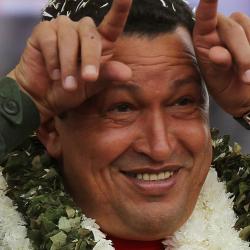