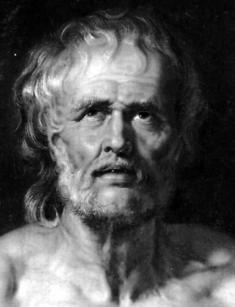 Seneca (Lucius Annaeus Seneca) is a Roman writer, poet, philosopher, politician. He was one of the most famous Stoics, as well as the tutor to Emperor Nero.

Lucius Annaeus Seneca was born in the 4th century BC in the Spanish city of Córdoba in a rather noble family, belonging to horsemen. His father Seneca the elder and mother Helvia were well-educated people who studied history, philosophy, and rhetoric. In a while, when Lucius and his elder brother Junius Gallio were young, the couple decided to move to Rome. Lucius received philosophical training from such Stoics as Papirius Fabianus, Sextius, Attalus there.

The boy's father was well-connected and wealthy, so he could afford to pay for the education and development of his son. Seneca the Elder prophesied his child a brilliant law career. Indeed, thanks to his charisma, oratorical talent and remarkable erudition, the career of Seneca Jr. took off.

But an unexpected serious illness, which required leaving for Egypt for long-term recovery, frustrated all plans of the beginning lawyer. The sudden grief knocked down Lucius, and he almost committed suicide.

After returning from Egypt to Rome, Seneca began to condemn the existing Roman political system and politicians for moral decline, created works related to ethical issues.

In 37 AD, Caligula came to power. He was so offended by Seneca's activities that he decided to kill him. But the philosopher survived because Caligula’s mistress talked off the ledge saying that Seneca was seriously ill and would die soon.

The end of Caligula’s reign did not bring relief. In 41 AD, Claudius became emperor, who carried on the tradition of the former ruler. He also had a negative attitude towards the charismatic, imperious and influential political leader and, on the advice of his wife Messalina, commuted Seneca to exile on the island of Corsica, where he spent the next eight years.

Ironically, Claudius’s new wife, Agrippina, helped Lucius to return to his homeland. At that time, the imperious woman was concerned about the ascension to the throne of her 12-year-old son Nero after the death of the emperor. The son of Claudius from his first marriage, Britannicus, who also claimed the throne, made her worry. So, through her influence, she recalled Seneca to Rome and appointed him tutor to her son, Nero.

The patronage of the talented philosopher was not in vain because Nero became a great and famous emperor at the age of 17. Under his rule, Seneca was appointed consul and became an imperial adviser.

As usual, there are two ways to look at any situation. On the one hand, Lucius had almost unlimited power; on the other hand, he was utterly dependent on the ruling emperor. Moreover, the Roman people and the Senate hated him. It influenced his decision to retire at the age of 64. He left all his wealth to the state treasury and lived in one of his estates.

Seneca adhered to the philosophy of stoicism. Its key features are indifference, apathy, dispassionate attitude towards all misfortunes, fatalism. This philosophy can be expressed in the statement:

"Fate leads the willing and drags along the reluctant."

Being the successor of this school, Seneca touched upon the themes of happiness, anger, virtue, mercy. Seneca's views differed from the opinions of the representatives of Roman Stoicism. He tried to understand the essence of the universe, what controls the world and what it consists of, studied the theory of knowledge.

The result of his philosophical activity was Letters to Lucilius. In them, the Stoic showed that philosophy taught, above all, to do, but not to reason. Philosophy cannot be fun for the crowd, and it is not a show. It creates and forms the soul, regulates life and controls the actions of a man.

Lucius was a real person who was an epicurean. In the ancient world, there were no such opposing trends as Stoicism and Epicureanism, which main ideas were hedonism and the enjoyment of life. The Stoics were people who lived ascetic lives and tried to control their emotions and desires.

Seneca wrote many works devoted to moral issues, for example, "De Ira" (On Anger). He stated in the book that it was important not only to suppress anger but also to preach love of one's neighbors. In other work, the man wrote about mercy, which always brought happiness, peace in every home; compassion is especially valuable in the royal house, where it is usually a rare guest.

In general, Seneca’s works include 12 essays: the above-mentioned "On Anger", "On Tranquillity of Mind", "On the Happy Life", etc., also 3 more significant works "De Clementia" (English: On Mercy), "De Beneficiis" (English: On Benefits), "Naturales Quaestiones". Moreover, the philosopher wrote nine tragedies based on mythology. The most famous works are "Oedipus," "Medea," "Agamemnon," "Phaedra" and others.

Contemporaries value him primarily for his pearls of wisdom and deep thoughts, which are relevant even today. His books are actively published and sold so far.

It is reliably known that Seneca had at least one wife, Pompeia Paulina, who was half the philosopher’s age. However, historians have different opinions about the period of their marriage, and they still doubt whether Seneca had had other women before he met Paulina. According to ancient authors, Pompeia was the second wife of the philosopher, and they met at her home when Seneca was 50 years old.

However, the author wrote in his essay “On Anger” that he had the habit of analyzing the past day together with his wife every evening. He created the work under emperor Claudius’s rule when Lucius was about 40 years old. According to the second version, the philosopher married Paulina at the age of 36 and lived with her in love and harmony until his death.

Anyway, the number of marriages and the year of marriage to Pompeia have not been proven yet. So, this page of the philosopher’s biography is not fully disclosed. The personal life of the genius will remain a secret to contemporaries. But the main and most significant thing is that the woman's love was selfless and forgiving, she even decided to die with her husband.

The cause of the poet and philosopher’s death was the intolerance of emperor Nero toward his former tutor. The Pisonian conspiracy in 65 AD was uncovered, and Seneca’s name was accidentally caught up in its aftermath, although no one accused him. It was the reason for Nero to say goodbye to the philosopher and order Seneca to cut his veins.

Tacitus described the death of Lucius. According to him, in the last minutes of his life, the convict was firm and calm, he encouraged many friends and trembled once when he was saying goodbye to his wife, Paulina. He tried to console her, but the woman decided to follow him. Paulina was stopped on time, and she lived after her husband’s death for several years.

As a Stoic, Seneca did not hesitate to cut his veins, but he could not die quickly due to his advanced age and slow loss of blood. The man ordered his servants to carry him to the bath and passed away there, breathing in moist, warm steam and bleeding heavily.

"The timeliness, not the size, of a gift makes some benefits great."

"You must live for another if you wish to live for yourself."

“The greatest obstacle to living is expectancy, which hangs upon tomorrow and loses today. While we wait for life, life passes”.

“Planning to commit a crime is still a crime.”