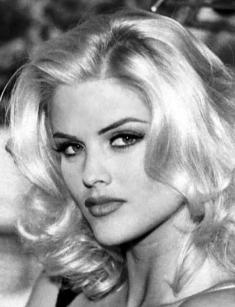 Anna Nicole Smith (born Vickie Lynn Hogan) was born in a small town in Texas in 1967. Her father was Donald Eugene Hogan, an unlucky clerk, and her mother, Virgie Mae Arthur (née Tabers), worked at the police station. Sometime after the birth of his daughter, the young father suddenly left the family, leaving his wife on the verge of poverty. But Virgie's sister gave a hand to a single mother. She began to look after the baby while the mother earned a living.

At school, Vickie Lynn had bad marks as she always had her head in the clouds. Even then she was a little dreamer with lack of parental warmth and came up with a version of her origin. Marilyn Monroe was the idol of the girl, and Vickie secretly hoped that the full-bosomed blonde was her real mom. The girl really wanted to look like the star, but nature has made its own adjustments. Young lady's height exceeded 5'11'' (180 cm), hair got darker, and she had small breasts.

To overcome the inferiority complex, the girl got a job in a small cafe. There she met the chef Billy Smith, whom she married at the age of 18. The couple had a son, Daniel. However, their love didn't last long, and the husband threw Vickie with the baby out.

Not willing to repeat the fate of the mother, Vickie decided to take extreme measures: she started to work in a local strip bar trying to earn big money in a short time. However, she hadn't succeeded in this sphere.

But the breastless stripper was given only day shifts since at night shifts worked only beauties as they brought profit to the club. But such life's circumstances were good luck for the young woman. There she was noticed by an old man on a wheelchair, who turned out to be James Howard Marshall II, the most prominent petroleum tycoon billionaire. At the time, he used to a professor, a teacher of law, and a member of the U.S. government. But by the age of 85, this previously good-looking and handsome man already lived out his last days.

He immediately started to take care of a young girl and freed her from the need to work at an adult entertainment facility, fully ensuring financial independence. Moreover, James was an admirer of curves and happy to pay for Vickie's breast surgery.

The couple was spending a lot of time together, but their relationship was more of a friendly nature. The tycoon was attracted by the freshness and youth of the girl, and in turn, she received what she always lacked: paternal care and the ability not to think about tomorrow.

In the first years of the acquaintance with the tycoon, Vickie changed and looked much prettier. Her breasts increased to the desired size 42 DD, and her hair became blonde. So, the dream to be similar to Marilyn Monroe was fulfilled. With the help of her fan the beauty participated in the Playboy's competition for the title of Cover Girl and won it.

Her photo in a beautiful tight-fitting outfit became the decoration of the infamous magazine. Paul Marciano, the head of the brand Guess, noticed Vickie and invited her to shoot of an advertising company. The talented entrepreneur changed the name of the model to Anna Nicole and left the name from her first husband. And the world saw Marilyn Monroe of 90-s, Anna Nicole Smith.

On the eve of 1993, the beauty received an offer from Playboy to star naked. She asked James Howard for advice and then agreed. She was given the title of The sexiest girl of the year, and her popularity increased dramatically.

In the same year, she got divorced with her first husband and married James Howard. According to some reports, he gave his young wife expensive gifts after the wedding. Only one hour his new wife in the jewelry store cost the tycoon $2 million. But the happiness did not last long. A year later James was gone, and Anna was not included in his will and trust.

The greedy young woman was not going to give up and hired a lawyer to sue the inheritance that, to her mind, belonged to her. The proceeding against the son of James Howard, Marshall Pierce, for money lasted for 11 years. This case ended with the death of Marshall Pierce, after which Anna Nicole became the owner of the treasured millions.

In the mid-90s producers began to invite Anna Nicole to star in movies. She played an episodic role in the movie Naked Gun 33⅓: The Final Insult. After a successful debut, the model got the second role in a glossy comedy The Hudsucker Proxy by the Joel and Ethan Coen.

In the third movie called To the Limit, Anna Nicole played the lead role. She also invited her mother and 8-year-old son to take part in filming. 1998 was marked by the star's debut as a director and producer. She created an autobiographical film Anna Nicole Smith: Exposed, where she played herself. Throughout this time, the model was hosting her own show called The Anna Nicole Show.

Since the beginning of 2000, the intemperate actress began to abuse alcohol, antidepressants, and a substitute for drugs, methadone. And all this was in addition to her excessive appetite. Anna Nicole was gaining weight quickly.

In the beginning, she still managed to take part in shooting in fashion magazines women of plus size, but soon the shape of the actress becomes not just curve, her weight increased to the extreme limit. The model made attempts to lose weight through diets, medications, and surgery.

During her life, Anna Nicole made about five breast surgeries and an infinite number of liposuctions. The first plastic surgery was carried out at the beginning of her stripper career when Anna inserted the first silicone implants. It was followed by a total increase in volume to gigantic proportions, which was Marshall's influence.

In the time, willing to get rid of excess weight, she underwent surgeries to remove fat from legs, buttocks and abdomen. She did it many times, as after her visits to the clinic she quickly gained pounds back. The last two breast surgeries, which played a fatal role in damaging her health, Anna did immediately after the birth of her daughter.

The Death Of Anna Nicole Smith

Anna Nicole spent 2006 in the Bahamas, where she gave birth to her daughter, Dannielynn. The father is her lover, a photographer Larry Birkhead. The joy of motherhood was overshadowed by the sudden death of her first son, who died in the mother's hospital room from an overdose of drugs. Anna took very hard the loss of one of the children, and she even lost her memory for some time. But that didn't stop her from marrying her lawyer, Howard K. Stern, soon after her son's death.

Sometime after this event, the actress suddenly became ill and died. The reason for Anna Nicole's death is still unknown. An autopsy showed the presence of inflammation in the lungs. But there were a lot of antidepressants and methadone found in the house. The mother of the actress believes that Stern poisoned her daughter and grandson for personal gain, although the investigation has not proved his guilt.

After the star's death, Dannielynn was pronounced her only heir. After the announcement, there were immediately five applicants for paternity. The DNA testing showed that the father was Larry Birkhead, who settled with his reclaimed daughter in Kentucky. On Instagram, you can often see photos of a happy couple of father and a loving daughter.

These images show significant cross-eyed the daughter of Anna Nicole has. On the advice of doctors, she eventually underwent surgery to correct the defect. An interesting fact in Dannilyn's life is that she was shooting in advertising for Guess, the company her mother once starred for. Photographers noted the girl's innate talent in working in front of the camera.