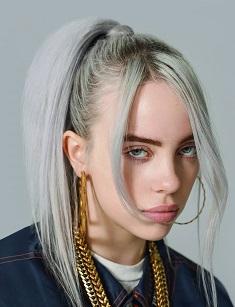 Billie Eilish is an American singer, very young; she is just 17 years old. She is an eccentric person who sings kind of dark pop but with a gentle, sweet voice. She plays guitar, ukulele, and keyboard musical instruments.

This singer is a significant person in the music world. Most of her fans are around her age; she is extremely important for the young generation because they understand each other and Billie can speak about relevant for her age topics and be understood by her fans. She believes that her generation can do something great, that they are better than everyone thinks:

«Teenagers know more about the country that we're living in right now than anybody.»

Since her childhood, Billie was rather creative. Billie didn't go to school; instead of this, she was homeschooled. Her parents chose this variant because they believed that this could help their daughter to develop herself, her personality. When she was eight, she went to the Los Angeles Children's Chorus, at age eleven she started writing her own songs. Also, she really enjoyed dancing but she got trauma in 2016, and there was no way Billie could continue her dancing career.

We all know that our families are essential for our development. Billie’s parents are Maggie Baird and Patrick O'Connell, both actors. A significant impact on young singer was made by her brother, Finneas O'Connell. He is a singer, musician, and actor. When Billie was little, Finneas already had his own band named "The Slightlys". Generally, he was the person who inspired Billie to make something musical on her own.

Billie's family has never been wealthy. Her parents are not Hollywood stars, they are more like poor actors. Different fashion houses send the girl a lot of really expensive and fashionable clothes hoping that she will wear them and post pictures on her Instagram. These actions annoy Billie because she can’t imagine her in all these meaningless clothes that are just not for her standard of living. She wants to be who she is – just a regular teenager who wants to share her thoughts about this huge world, who wants to share with other teenagers.

Eilish is not an easy person, and she even confesses that she’s that kind of person who will hear what she needs to commit and will do the opposite right after that. She strongly believes that we all are responsible only for ourselves. You don't need to be afraid of the judgment of others, and you can do whatever you want because it's your life.

Billie’s career started with her brother’s help, actually. He wrote a song ‘Ocean Eyes’ for his band, then Billie recorded it, made a music video with her dancing and that it was. The beginning of success. ‘Ocean Eyes’ started spreading among the whole world, it has appeared in the movie ‘Everything, Everything’ (2017) and TV series ‘Runaways' (2017) which was a rather huge success for young talent. After that, there were some songs (‘Bellyache’, ‘Watch’, ‘Copycat’, etc.) produced and co-written by Finneas again and so in 2017 an extended play record ‘Don't Smile at Me’ emerged.

The creation of the first studio album ‘When We All Fall Asleep, Where Do We Go?' started in 2018 and it still in process. The most popular tracks, for now, are ‘You Should See Me in a Crown’, ‘Wish You Were Gay’ and ‘Bury a Friend’. By the way, Finneas helps his sister with this too; he wrote by himself ‘When the Party's Over’ and ‘My Strange Addiction’, other songs are written by them together. That’s really admirable how brother and sister communicate and love working with each other.

This album ‘When We All Fall Asleep, Where Do We Go?’ is about our hopeless existence and how we cannot do anything with awful things that go on in the world. Billie thinks about lots of fire in forests of Los Angeles, her native state, about the shootout in schools and how all of this became normal for people. The singer wants the world to know that it's not okay to turn something so horrible into normal things, that we need to fight with it actually.

Billie has a lot of unique ideas for the interpretation of her songs. For example, when she was making the music video for "Bury a Friend', she had thoughts about being naked. She wanted the audience to see a helpless body and a lot of syringes that some hands put inside it. Singer believed that the most of the people are afraid of that kind of stuff and that's what Billie wants - she wants to train people’s fears so one day they will be able to get rid of it.

Speaking about Billie’s love life, it seems really complicated; it's a whole mystery. The singer is an active Twitter user and judging from her posts; we can tell that she's interested in boys, she is a flirting person but doesn't have a boyfriend at the moment. Billie says that relationship would take a lot of time and might have negative influence on her creativity or self-development. There were rumors that she used to date Jack Francis, Khalid, Shawn Mendes, but all that doesn’t have confirmation.

Her negative emotions connected to the issue of love and dating someone are also shown in her work. For instance, her latest song ‘Wish You Were Gay’ is dedicated to her crush in the past. The meaning of this track is that Billie’s crush didn’t like her and she was so hurt that she wanted him to be gay just for keeping her self-esteem. As a matter of fact, that guy turned out to be gay.

Billie is considered to be straight meaning sexual orientation, but there were a lot of rumors about Billie and her close friend Bhad Bhabie being a couple. So the question of Billie’s sexuality was rather actual, but the singer has disproved everything that had been told about her and her friend.

In November 2018 Billie made a confession: she suffers from the Tourette syndrome (a neurodevelopmental disorder characterized by multiple motor tics and one or more phonic tics).

When we talk about Billie’s influences, the first and the most important one that we can say is her brother, Finneas. They create songs together and sometimes perform on live shows. Look at the Billie’s quote when she speaks about the aim of their work, their songs:

«We try to write what everyone is thinking, but no one says. We try to say stuff that doesn't have to be that deep: it could be something random, like "I feel sad," but you say something way deeper in a certain way that makes sense, but you haven't really thought about. […] We try to be really interesting with the lyrics and really conversational».

Speaking about other Billie's influencers, since the childhood she liked the Beatles, Green Day, Avril Lavigne and Lana Del Rey. She also enjoys rap music and even wants to collaborate with some rappers.

Singer's appearance usually causes some negative comments about it. Firstly, people don't understand why they never see her smiling in photos. Billie explains this fact that smile makes her feel uncomfortable and defenseless. Secondly, the way she clothes herself. It’s often really simple: just jeans and hoodie or shirt, it’s a classic style for lots of people her age. People might not be used to it. When they think about singers, maybe they want to see someone caring about how they look: their make-up, clothes, shoes and so on. A lot of people always give Billie advice about how she should be dressed, what short and tight clothes she should buy. And what do they get with this little singer? No happy smile on pictures, no «sexy» dresses. Instead of this, when she announced news about her ‘1 by 1' tour, she posted the video with a spider in her mouth. That's just her style; she expresses herself whenever she wants and however she wants.

Well, Billie’s response to all of this is the value of her freedom: she likes not to follow or maybe even break the rules, some social frames. She doesn't care about others' opinion, but she cares about her own feelings and comfort.