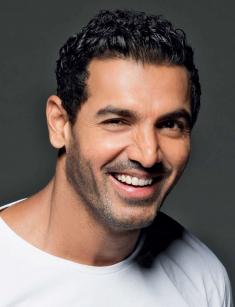 John Abraham is an Indian actor, producer, and ex-model. He is incredibly popular and in demand in Bollywood, and the European audience first heard about him after the release of No Smoking directed by Anurag Kashyap. The movie earned a strong ovation at the Rome film festival. At the same time, it became the starting point for further successful film career of the actor.

John Abraham was born in Mumbai on December 17, 1972. His father, Abraham John Sr., was an archaeologist and his mother, Firoza, was a housewife. The family of the future star could be called a family of mixed religious and ethnic heritage. John Abraham's mother is an Iranian Zoroastrian and a member of The Parsi Community, while his father is a Marthomite Syrian Christian. When John was just born, his mother's family named him Farhan, but his father soon baptized his son and gave him a more socially adapted name. The actor was brought up in the traditions of the Catholic faith. His zodiac sign is Sagittarius. Nowadays, the actor considers himself as an agnostic atheist.

Since childhood, John Abraham was a curious and comprehensively developed child. The different national origins of the parents became a reason for him to study the traditions and customs of two nationalities. Moreover, the future actor as a teenager learned several languages. Today he speaks Hindi, English as well as Marathi, Gujarati, and Malayalam.

John's family was wealthy, so he is not familiar with poverty, which in the minds of ordinary people is often (and not unreasonably) associated with India and Mumbai in particular. Abraham attended school, and after graduation, he enrolled in College Scottish and Jai Hind College, then he studied economics at university. In addition to studying, John was fond of sports. In his youth, he was the permanent captain of a local football team, and also tried his hand at motorsport.

It is noteworthy that at some point in his life Abraham was seriously thinking about making a professional football career. Although the future actor really had the ball skills, his parents still dissuaded him from such a future. The main argument was the low salaries of Indian players who would not allow the guy to earn enough.

So, John Abraham decided not to become a sportsman. His attempts to work as an economist, on his specialty, also brought the young man neither profit nor pleasure from self-realization. However, physical shape and sharp mind allowed John to prove himself in an unexpected industry, and he became a model. The charismatic and handsome young man with his height of 6'0'' (183 cm) and weight of 180 lbs (82 kg) attracted the attention of many modeling agencies.

In 1999, Abraham won the Gladrags Manhunt Contest. After that, he took second place in a similar international competition in the Philippines. The contract with a modeling agency was not long in coming. Carrie Models offered cooperation with this charming Indian. New job offers in New York, London, and Hong Kong came after the first contract. Besides, the guy starred in commercials and even in music videos.

Since then, the artist has played in many Indian movies and become one of the most famous actors of Bollywood. He was nominated for a number of prestigious awards and also was titled an unofficial leader in the number of "curiosities" during the filming. For example, during the filming of Kabul Express in Afghanistan terrorists tried to assassinate the celebrity. During the filming of Shootout at Wadala, John earned a crack in the tibia, strained tendons and torn ligaments. And while working on another project, Abraham managed to break his leg when he was playing cricket.

However, all the movies with his participation always gain the love of the public. So, these sacrifices were not in vain. In the tradition of Bollywood, John often sings in the movies he participates, and he does it brilliantly. The roles of Abraham's on-screen lovers often go to such popular Indian actresses as Kangana Ranaut, Deepika Padukone, and others.

No less striking was considered his duo with Akshay Kumar. The movies Desi Boyz, Garam Masala, and Housefull 2 gained incredible success with viewers.

In addition to acting, in 2012 John became interested in producing. His producer's debut was the movie called Vicky Donor. Though the movie is considered to be a comedy, it concerns a serious issue in India - sperm donation. The fact is that this topic is still taboo in Indian society. The lead roles were played by Ayushmann Khurrana, Annu Kapoor and Yami Gautam.

Abraham also appeared in the film. Both the audience and film critics warmly received the project. The movie was nominated for many awards, and John Abraham won the Stardust Awards. It was also recognized as the most successful low-budget film by ETC Bollywood Business Awards.

No doubt that after this success he decided not to stop there and continued producing. His next works were Madras Cafe, Rocky Handsome, Force 2, and others.

There are a lot of photos of John Abraham with Indian beauties, but they have only work on the set in common. Surprisingly, but the actor was true to one girl for ten years. John Abraham and actress Bipasha Basu met in 2001. Later, they lived together. However, their relationships didn't end with marriage, and in the early 2010-s, the actors broke up. The reasons for that were unknown, but in an interview, Bipasha admitted that the breakup was not a shared decision.

Priya Runchal, a charming beauty, who has nothing to do with neither the modeling business nor the cinema, became a new actor's girlfriend. She works in the banking industry, but it was she who became the love of Abraham's life and his legal wife. The wedding ceremony was held on January 3, 2014, in Los Angeles.

By 2018, Priya and John have got no children yet, but as the actor's fans hope the happy couple will catch up.

The actor doesn't like to demonstrate his personal life. Most of his photos on Instagram are from shooting and sports training. By the way, the actor has invested in the creation of a mobile app for proper nutrition, which is popular with users. He also plans to launch an app related to fitness.

John arranges charity events, visits hospitals and children's institutions. He cares about the animals, too. Abraham is a member of PETA, and he is a staunch vegetarian. In 2013, the actor appealed to the Minister of the environment of India with a request to prohibit at the legislative level the use of animals in the circus.

In 2012, the actor helped 30 unfortunate elephants to find a home. He created the first in India "village" for elephants in Maharashtra, for which he received the award "Eco Warrior."

John is the United Nations Goodwill Ambassador in India, and he actively helps refugees. He created a website to help all those in need, and he is personally looking for housing for the underprivileged.

The actor's passion is motorcycles. John Abraham is the face of Yamaha, Castrol, and Alpinestars brands.

In 2018, several projects with the participation of John Abraham were released. He also produced the movie called Parmanu: The Story of Pokhran. The actor played a lead role in his film. The plot is based on real events that took place in the Indian province of Pokran in 1998. It is about the nuclear tests conducted by the military, as well as its consequences that had affected the main characters.

He also got the lead role in the film Satyameva Jayate.

He is currently working on Romeo Akbar Walter by Robbie Grewal which will be released only in 2019. But it is already known that Abraham portrays Romeo. Net worth is $25 million.