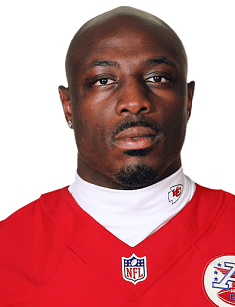 Justin Donovan Houston is a talented American football outside linebacker who plays in the National Football League (NFL). He played college football at the University of Georgia, where he earned All-American honors and was drafted by the Kansas City Chiefs in the third round of the 2011 NFL Draft.

Back before Justin Houston became a football star, he was just a kid from a big family in a small Southern town. Houston was born in Statesboro, Georgia. He has a huge family that includes mother, grandmother and ten siblings – two sisters and eight brothers. Justin is the family’s sixth oldest child, and he has a twin, the twin brother’s name is Jared. He was raised by a single mother who had no steady male influence to lean on. She was strict, so children grew up in harsh conditions.

Their house never went quiet, siblings spent all their time together, and there was no private space. One day their house razed down in a fire accident from which Justin saved his two brothers from the fire. Afterward, local churches helped feed and clothe the Houstons while they found another place to live. His elder brother Demetrius was some kind of a mentor for Justin pushing him into everything from sports to street fights. Houston’s life was not easy, but he was a passionate person.

Having had a keen interest in sports, young Justin attended Statesboro High School where he played football and basketball. Houston turned out to be very talented and played more like a man than a teenager. He excelled in football and made the All-Region selection two times. His impressive skills helped him to earn a scholarship to study at the University of Georgia. As a sophomore at college in 2009, Houston was a second-team all-SEC selection after recording 7.5 sacks.

In junior year, after improving his record, he was named in the all-SEC selection first team and also the All-American. Due to his strong character and purposefulness, a linebacker made himself better and better. When Houston was told he could not, he did, when he was told he was not good enough, he improved. Justin is a gifted athlete with the sports ego, but he keeps that ego mostly inside himself letting it spill out during games. In that way, Houston became a perfect player: understated, violent on the field, unassuming off of it, and built primarily on hard work.

Houston worked his way through every step of becoming a football star and finally announced his decision to enter the 2011 NFL Draft. He attended the NFL Combine and performed all of the combine and positional drills. Absorbing every bit of advice from coaches then proving his worthy of every-down play, he earned enough respect and a reputation as one of the league’s best linebackers. Houston attended Georgia’s pro day and opted to run the 40-yard dash (4.61s), 20-yard dash (2.66s), and 10-yard dash (1.61s). Subsequently, he improved his skills and times in all three drills and also performed positional drills during his pro day. A few months later, he failed a drug test for a banned substance (marijuana) and dropped down at the draft selection.

Multiple teams such as Baltimore Ravens, Kansas City Chiefs, New York Giants, New York Jets, San Francisco 49ers, Seattle Seahawks, and Tampa Bay Buccaneers made pre-draft visits with Houston. Finally, The Kansas City Chiefs selected Houston in the third round and signed a four-year contract with him. Kansas City Chiefs is a professional American football team based in Kansas City, Missouri where Houston has played his entire career and highlights. Houston’s personality, his skill set, and his versatility blended into a perfect fit for Kansas City Chiefs. Head coach Romeo Crennel named Houston one of the starting outside linebackers to begin the season in 2012. He started in all 16 games and recorded 66 combined tackles (53 solo), ten sacks, six pass deflections, one forced fumble, one interception, and a safety.

Having earned the Chiefs Mack Lee Hill Award, he got an invitation to his first Pro Bowl to replace for the injured Von Miller. Houston ranked 49th on the list of NFL Top 100 Players in 2013, and it was an achievement for the offensive linebacker.

Having had the highest sacks among all the linebackers in the league in 2014, Houston agreed to a six-year contract worth $101 million with the Kansas City Chiefs - the biggest contract ever offered a linebacker in the history of the NFL. But the chiefs placed a non-exclusive franchise tag, worth $13.195 million, on Houston, meaning that he could negotiate with other teams, but the Chiefs had the right to match any offer or receive two first-round picks as compensation. In 2015, linebacker got a knee injury that extended to surgery and missed five games of the league season. After recovering from the surgery, Houston had a three-week practice period. The Chiefs chose to activate him but after the first game, placed him on the inactive list for the game. He performed in a Week 12 finishing the game with ten tackles and three sacks, one of which forced a fumble and resulted in a safety. In season 2016 Houston played only five games, recording 21 tackles and four sacks. Despite longtime missing, he was still ranked 76th on the NFL Top 100 Players in 2017.

In March 2019, after eight seasons, Houston was released by the Chiefs. The Chiefs attempted to trade Houston but were unable to find someone willing to make the trade.

Justin Houston turned 30 and is typically the beginning of the end for most players.

Justin Houston is married to Johnisha Garner. A couple had a longtime relationship before the marriage. Their paths crossed in Georgia when Justin had arrived at the University of Georgia to start football practice and Jo was visiting a friend on campus. They have met each other and have been together ever since.

Justin and Jo had a son before their marriage. The couple married in 2014 after Justin had signed his rookie contract with the NFL. They had a warm wedding ceremony in Atlanta which had their close friends and family in attendance. Now Justin and his wife are happily married and have two children – a son and a daughter.

Justin Houston is the richest linebacker in NFL history. His net worth has been estimated at $30 million by Celebrity Net Worth. Justin Houston’s talent helped Kansas City Chiefs to become one of the league’s best edge-rushing teams. Houston is the strongest player among the Chiefs, and he is famous for his special superhero trick where he moves men 30 pounds heavier with his hands.

During his career, Justin appeared in Pro Football Focus annual list of the top 101 players in the NFL (2013-2018) and earned Mack Lee Hill Award, Deacon Jones Award. Nowadays, Houston is a famous and one of the demanded American football players.