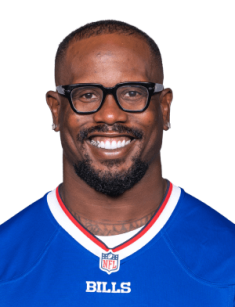 Von Miller whose full name is Vonnie B’V Sean Miller is a professional football player for the NFL team Buffalo Bills. He used to play for the Denver Broncos and helped them win the 2016 Super Bowl. Von is viewed as one of the most dominant defensive stars in the League. He plays as an outside linebacker.

The player was born on March 26, 1989 in Dallas. His parents Gloria and Vince used to be athletes in college. The star has a brother named Vinsynzie.

In high school, Miller played football and took part in track and field competitions. As a senior, he was named the most valuable player after recording 76 tackles and 6 sacks.

In 2007, Von joined Texas A&M University, where he studied farming and played for their team. In 2008, he was suspended by a new coach for skipping classes. Miller decided to take his training seriously and returned to the team.

Von participated in the 2011 League Draft and was viewed as one of the most promising outside linebackers. He was picked by the Broncos.

In his first season, he received the AP Rookie of the Year award, recorded 11.5 sacks and 19 QB hits. In November 2012, he was fined for a hit on quarterback Cam Newton. In 2013, Miller ended his season earlier due to an injury. Without him, they lost the 2013 Super Bowl to the Seahawks. In the following seasons, Von received multiple awards and became the highest paid defensive player.

In 2021, Miller sprained his ankle in a match against the Cleveland Browns. Later, he was traded to the Los Angeles Rams.

In 2022, he left the team and signed a contract with the Bills. The Rams replaced him with Bobby Wagner.

In his first game, Von recorded 2 sacks, 2 QB hits, and 3 tackles for loss. In December, he underwent knee surgery and was placed on reserve.

Von's girlfriend is Megan Denise, an Instagram star. As of December 2022, they're expecting their second child.

In 2012, Miller founded a charity organization that provides underprivileged children with eye care and corrective eyewear.

Miller is an ambassador for Adidas, and other brands. The player has a unique triangle haircut. According to him, it represents manifestation and enlightenment.