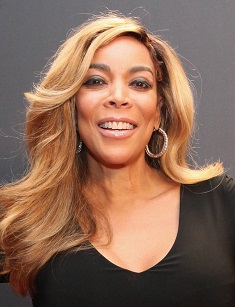 Wendy Williams is an American actress, writer, designer, TV host and New York Times best-seller. She also was a radio host and DJ, and she is known as a "shock jockette" for her humor and lots of attention that she attracts.

When Wendy celebrated her fifty years, the council of Asbury Park where she grew up changed the name of the street, where she lived, to Wendy Williams Way.

William’s family consists of her, her parents, Thomas and Shirley, and her two siblings. She studied at the Ocean Township High School and then she got an Associate of Science degree in communications at Northeastern University in Boston where she was a young DJ at the radio station.

In childhood Wendy was a fat girl and she has been shamed because of this even by her own family. She had her first diet when she just went to school and the person who made her do it was Shirley, her mom. Hopefully, now she is in love with her body.

Wendy has always been a hard worker. Her career began at the WVIS, a radio station on the Virgin Islands of the United States. Then she started working at two places at the same time: WOL in Washington (an afternoon job) and WQHT in New York (a night work).

After the 1989 year WRKS (urban contemporary style, at the present moment – WEPN-FM) station offered Wendy full-time job for their morning show. In December 1994, Emmis Broadcasting bought WRKS and changed the format of this station, so Wendy was transferred to WGHT (hip-hop). She got fired from here in 1998.

Then Williams was hired by WUSL, a station in Philadelphia. Her husband, Kevin, became her agent. Wendy made the station rise from 14th place in the ratings to the second one.

In 2001 Wendy was back at the New York airwaves because she got hired by WBLS. There was an article in The New York Times where was mentioned that her "show works best when its elements – confessional paired with snarkiness – are conflated".

Wendy Williams quit the radio in 2009 because she wanted to focus on her own television program and to be more with her family. She was also included into the National Radio Hall of Fame.

In 2008, Debmar-Mercury, a TV syndication company, suggested Williams to have a six-week TV test period of her own talk show. That year, on July 14, Williams started with her daytime talk show, "The Wendy Williams Show," in 4 cities. During the period of the tryout, The New York Times sarcastically noticed that the show created a "breakthrough in daytime" by introducing the genre of the "backtalk show". Wendy brings up lots of hot topics at her show. Sometimes, actually, she goes too far. For instance, there was a situation in 2018 with "The Clark Sisters", an American vocal group. Williams has made some disrespectful talk about them, and the whole internet just exploded with angry messages against Wendy where was said how legendary this band is.

Of course, her show had a great success, so then Fox Television Stations signed a contract with Debmar-Mercury to distribute the show nationally on their stations since summer 2009. Besides that, BET, Black Entertainment Television, got rights to broadcast it at night. In 2010, BET started airing Wendy’s show in 54 countries through BET International.

Williams has been nominated on several occasions at the Daytime Emmy Awards for Outstanding Entertainment Talk Show Host, and her show itself was for Outstanding Talk Show/Entertainment. Generally, "The Wendy Williams Show" attracts 2.4 million daily viewers, and Williams trades off daily with Ellen DeGeneres as the best, the number one female TV host on daytime television.

As we said before, Wendy is a hard worker, and she has always been. She had never skipped her show until February 2018, when she said that she needed to take three weeks off because of her health. In January 2019 she was hospitalized again, but she returned to the show in March 2019.

"The Wendy Williams Show" has been renewed through the 2019 – 2020 years TV season on the Fox Television Stations. It also has its own youtube channel. And by the way, any person can get a free ticket to her show but needs to fill the form on her website.

Besides her show, Wendy appeared on the stage of a theatre, in some films and TV series.

She starred in the TV series "Martin" (1992), in the soap opera "One Life to Live" (2011). Also in 2011 Williams hosted a game show named "Love Triangle," for that she and her husband served as executive producers. That year she also appeared in the "Dancing with the Stars," her partner was a professional dancer, Tony Dovolani, and she won the second prize.

In 2013 Wendy and her husband, Kevin, started a reality TV production company, "Wendy Williams Productions", that has been releasing some unscripted content.

Speaking about acting in the theatre, in 2013, Wendy had the acting part of Matron "Mama" Morton in the musical "Chicago" on the Broadway.

In 2015 Williams started the partnership with the Home Shopping Network (HSN), where debuted a clothing line of some everyday pieces for women. The debut had a huge success. The Wendy Williams line is sold only at HSN. On QVC, a home shopping network, we can find "Adorn by Wendy Williams" – the collection of jewelry products.

In 2012 Williams posed nude for PETA's (People for the Ethical Treatment of Animals) "I'd Rather Go Naked Than Wear Fur" advert campaign to urge shoppers to join her in crossing fur off their shopping lists.

Wendy has always been very open about her personal life on air; she is used to discuss her miscarriages, breast surgery, and previous drug issues. Speaking about the last one, in 2019 Williams announced that her family lives in a sober house because of her past addiction to cocaine.

In 1997 Williams married Kevin Hunter, a producer. By the way, her wedding ring made a real splash: it's with 3-carat diamond. In 2000 their son, Kevin Hunter Jr. was born. Wendy is religious, she is a Christian, and as it is known, she prays with Hunter before every show.

In 2008, Nicole Spence, a worker at The Wendy Williams Experience, filed a sexual-harassment lawsuit against Wendy's family and mostly against her husband. Nicole claimed that Kevin demanded sex from her a lot of times and that he assaults Wendy right at the workplace. Both Wendy and Kevin denied the prosecution, and the case was dismissed.

Speaking about Kevin, there were some rumors about him having another child with another woman, his concubine. Williams has heard all this talk about her husband cheating on her and just laughed. As it was said in "Hollywood Life",

“Wendy is happily married, and she has no plans to leave or divorce Kevin. Wendy doesn’t appreciate people taking shots at her or her marriage. But, she had gotten used to it although it is not nice, appreciated or valid.”

The problems connected to Wendy’s health are not secret: she was hospitalized in 2018 and 2019, and she needed to take a pause from her work. Williams has Graves disease and hyperthyroidism; both these illnesses are connected to the excessive production of thyroid hormone. It is tough to monitor your health when you have such problems. In 2017 there was an accident: she passed out at her own live TV show, during the Halloween episode. These faints really scared all the admirers; somebody thought that it was stroke and it's the end. Wendy got terrified by herself, but she convinced her fans that she's okay and it wasn't a stroke at all.

We are continuing the topic of Wendy’s health and beauty. If we look at her "before and after" photos, we will see a lot of difference. Besides, Wendy herself doesn’t deny and even speaks about it openly. She had made some plastic surgery: liposuction, a tummy tuck, and breast implants. Speaking about changes, by the 2016 year Williams had a huge weight loss, she has lost fifty pounds in less than four years, and that's an incredible work done. When Wendy looks at her childhood pictures, she remembers her being a fat girl. Now she's achieved a lot, and she is happy for herself. That’s what the TV host told E! News about that:

"This is as good as it's going to get. I'm not gonna fight my body anymore — I've lost the weight; I feel fantastic."

In 2017 Wendy went to Barbados with Kevin, and there were paparazzi who took lots of photos of Williams in her bathing suit. It was a black rather open bikini, and these pictures had a huge amount of reaction on the internet. Wendy feels okay about this, but she really wanted to stay with her husband alone.

“I don’t care when people talk about the way I look because as long I love what I see when I get out of the shower, as long as [my husband] loves what he sees when I slip into bed, and as long as my son is not embarrassed by overweight or underweight mommy, I’m good.”

Williams really gets a lot of different and often not pleasant commentaries. For instance, since the beginning of her career, there was a question about her being a transgender. She denied these rumors, but she didn't even get upset about this, because she understands that she is really tall, she has a strong face and s strong body, and she thinks that such thoughts are totally okay in that case.