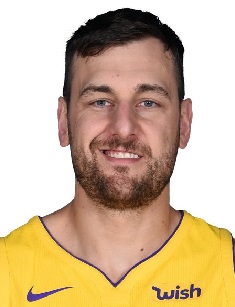 Andrew Michael Bogut is a professional basketball player from Australia. He is known worldwide for playing as a center for the Golden State Warriors of the National Basketball Association (NBA).

Bogut was born in 1984 in Melbourne, Australia to Michael and Anne, the immigrants from Croatia. Bogut holds Australian nationality. Little champion grew up playing basketball, Australian rules football and tennis.

Andrew's good education has always been the major priority of his parents. While studying in the Australian Institute of Sport (AIS) young Bogut played for its basketball team as the primary playmaker.

In 2000 Andrew decided to go to the United States of America to get an education. Pretty soon he got the invitation from the University of the State of Utah where kept on doing sport. Unlike his mates, Bogut played almost professionally. After the third season of playing for the University team, Andrew was declared to be the most valuable newcomer and the most outstanding playmaker among others.

In 2002 and 2003 he competed in the South East Australian Basketball League. Bogut played for U19 Australian junior national team and was named the Most Valuable Player of the 2003 FIBA Under 19 World Cup.

Andrew Bogut started his basketball career in 2006 where he was selected for playing for Milwaukee Bucks team.

The debut playing season as a professional player happened to be hugely successful for him. Almost immediately talented basketball player appeared in the team's main body and took root as a center.

Based on the results of his performances for this new team Andrew was recognized to be the best newcomer in the NBA.

The beginning of the next season – 2006/2007 – became a real disappointment for Bogut. He had got a severe injury till the start of the matches and was forced to rehab.

It was the loose of the main center that had an impact on the Milwaukee bucks's success: they couldn't get to the playoffs in the Championship.

The recovered player came back to games again only in 2009. The season turned out to be one of the most fortunate in his career. Despite his last health problems, he managed to play 69 games where his average score was 15,9.

In the middle of 2011/2012 season, Andrew Bogut got injured once again and had to leave games till the end of the year. In future players inclination to traumas made the governance of the football club think about his selling.

In 2012 Bogut's contract was bought from the Milwaukee bucks by another club – the Golden State. In April of the same year, Andrew withstood surgery on his ligament in the ankle. He was able to play at full capacity only in the season 2013/2014.

Based on the results of his performances for the team Andrew was named the best player in the defensive line in the league.

Bogut's successful performance in the playoffs in the 2014/2015 seasons let the basketball club get to the finals. In the last fights, they beat the Cleveland Cavaliers. Eventually, Andrew won the first championship in his career.

Later the club Dallas Mavericks became interested in his successes.

On 7 July 2016, Bogut was traded to the Dallas Mavericks. The trade was made by the Warriors to free up salary cap space for their signing of Kevin Durant.

Boguts debut for the Mavericks was in their season opener on 26 October 2016 where he recorded six points, six rebounds, three assists and one block in a 130–121 overtime loss to the Indiana Pacers.

The sportsman went on to miss 11 games in December with a right knee injury, a further six games in January with a right hamstring strain.

On 2 March 2017, Bogut signed with the Cleveland Cavaliers. Four days later, Bogut broke his left leg 56 seconds into his Cleveland debut. Initial X-rays revealed a fractured tibia; he was subsequently taken to the Cleveland Clinic for further tests. There his tibia was set and was scheduled to undergo a non-surgical treatment and recovery plan. He was later ruled out for the remainder of the regular season and playoffs. As a result, on 13 March 2017, the player was waived by the Cavaliers.

On 19 September 2017, Bogut joined the Los Angeles Lakers. He made his debut for the Lakers in their season opener on 19 October 2017, committing three fouls and three turnovers in a 108–92 loss to the Los Angeles Clippers. On 6 January 2018, Bogut was waived by the Lakers. In March, he announced that he would not return to the NBA during the 2017–18 season to remain in Australia with his pregnant wife.

On 24 April 2018, Bogut signed a two-year deal with the Sydney Kings. After the 2018–19 regular season, Bogut was named the NBL Most Valuable Player and the Best Defensive Player and earned All-NBL First Team honors. He helped the Kings reach the playoffs with an 18–10 record and a third-place finish, before losing 2–0 to Melbourne United in the semi-finals. In 30 total games, he averaged 11.4 points, a league-high 11.6 rebounds, 3.4 assists, and 2.7 blocks in 29.7 minutes per game.

Andrew Bogut started playing for the National team of Australia in 2003. Then he with colleagues managed to win the World Cup in their age group and obtain the status of the most precious player in the International Championship.

The player got the invitation to the adult team in 2004. At the Olympics which took place in the same year in Athens, he played as a forward.

Later Bogut played for the National Team in the World Championship in 2006. Following the results of the game, Andrew became the best player of his national team. Although, despite such a perfect performance of the playmaker, Australia got the 13 place.

Andrew Bogut is married to Jessica O Sullivan. We don't know a lot about their relationship cause the sportsman prefers keeping it in private. Before marriage, the couple dated approximately a decade. Now the family has two children.

Andrew Bogut is one of the most talented players in the NBA and a real star of the national Australian Team. Unfortunately, his inclination to getting injured doesn't let him demonstrate his talents at full capacity.

Andrew Bogut has always had remarkable sizes. His hight and impressive weight helped him to become one of the most successful players in the NBA. Also, Bogut has long hands which let him block the throws. All of it helps the player not only demonstrate a successful game in the defensive line but also score goals.

Bogut is one of the most successful Australian basketball players. His net worth is estimated at around $24 million. The annual salary of the sportsman is $16 million.

During his performance for different clubs of the National Association Of Basketball Andrew has shown the next results: