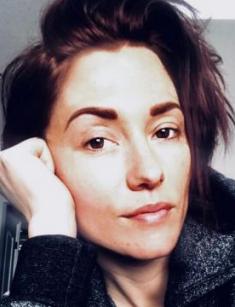 The beautiful actress used to be one of Maxim’s Hot 100 Women of the year in 2002. Chyler Leigh is an exemplary wife and mother who overcame her drug addiction along with her husband; the audience knows her for her series roles.

Chyler Leigh was born in 1982 in the east coast of the United States. Soon, the family moved to Virginia Beach: the parents, Yvonne Norton and Robert Potts, organized a business there and worked with people who wanted to lose some weight. They divorced when their daughter was eight.

Yvonne took Chyler and her brother Christopher to Miami and reunited with her first husband. The kids took the stepfather’s second name and debuted on the screen in 1997 in Kickboxing Academy where they played lovers.

16-year-old Chyler participated in commercials. She met 20-year Nathan West soon after graduation when they were auditioning for the series Saving Graces. Although the project was never released, it united the young people; they married in 2002.

Leigh received her first lead part in the teenage comedy Not Another Teen Movie in 2002. Similar to many stories, it is based on a bet: the most handsome guy in the school, Jake (Chris Evans), is going to prove to his friends he can turn the hippie frump Janey into the prom queen and falls in love with her. The project is notable for citing iconic youth comedies of the previous years.

Further on, the actress’s filmography included series mostly; she participated in the legal drama The Practice, the beach soap opera North Shore, the comedy detective Taxi Brooklyn, and one of the most extended family sagas 7th Heaven. Grey’s Anatomy, its spin-off Private Practice, and Supergirl brought the artist much fame; she played the main character’s sisters in all these projects.

The woman worked on Grey’s Anatomy for five years. Her character, Lexie, is nicknamed “Lexipedia” for her intelligence and brilliant memory; the handsome plastic surgeon Sloan fell in love with her.

In 2012, Chyler told the director Shonda Rhimes she wanted to leave the project to spend more time with the family. The request was satisfied, and Lexie Grey died in a plane crash.

Leigh has participated in the adventure saga about Superman’s cousin since 2015. Her character, Alex Danvers, is the natural daughter of the couple that took care of Supergirl. In the third season, Alex became the head of the Department of Extranormal Operations.

Chyler Leigh and her husband used to abuse cocaine. The director of Not Another Teen Movie was the first to notice the young actress’s unhealthy look. Fortunately, the lovers found the way out and married soon; the wedding ceremony was held in Alaska.

There is a tradition in the family: the parent who guesses right the sex of the future child gives them a name. Both Chyler and Nathan were right about the first kid and called the son Noah. The father was right the next two times and gave his daughters the names Taelyn and Anniston Kae.

Chyler supports the non-commercial Thirst Project aimed at providing every person on the planet with clean, fresh water. The actress is a devoted Christian and thanks God for helping her overcome her dependence.

Today, Nathan and Chyler’s personal life is full of love and peace. The couple has the fourth “kid”, a Malayan cat, whose pictures regularly appear on the woman’s Instagram page.

On February 1, 2019, the fifth season of the series Supergirl was announced.