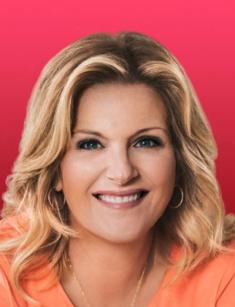 Trisha Yearwood is a popular country musician, TV personality, and actress. She earned her honor for the song “She’s in Love with the Boy” in 1991, and critics have awarded her many prizes, including three Grammys and other prestigious awards.

The future artist was born on September 19, 1964, in Monticello, Georgia. The girl’s father, Jack Howard, worked as a banker, and the mother, Gwendolyn, taught History at a middle school. There were three kids in the family: Trisha, Adam, and Scott.

The child showed her artistic talents early: she loved to sing and regularly appeared in musical contests. Music attracted little Trisha; she frequently listened to songs of Hank Williams, Kitty Wells, and Patsy Cline. The parents were supportive and encouraged their daughter to develop her music abilities.

As long as the young woman finished school, she enrolled at Young Harris College to study Business and attended the University of Georgia for a short while. However, the passion for art turned out to be stronger. Yearwood quit the university and moved to Nashville. Her further educational choice was more specific: Music Business at Belmont College. As a student, Trisha gained an internship at MTM Record, the company where she would spend the next 16 years.

The beginning artist presented her debuting album, named after herself, in 1991; the song “She’s in Love with the Boy” immediately became a great hit and put the woman’s name to the top of the music industry. More than a million copies of the first disc were sold, making Trisha the first female country singer to achieve it.

Yearwood strengthened her success with the 1992 album Hearts in Armor and received much recognition from critics for her manner and touching lyrics, inspired by the divorce with Christopher Latham.

Every new album would enjoy fans’ love and admiration; the artist was awarded her first Grammy in 1994 for the collaboration with Aaron Neville “I Fall to Pieces”. All in all, duets have been victorious for Yearwood: the song “In Another’s Eyes” performed with her husband Garth Brooks brought her another Grammy. The CMA and ACM also gave their prizes to Trisha. Fans appreciated the songs “Walkaway Joe”, “A Perfect Love”, etc.

In spring 2007, Yearwood left MCA Nashville Records for the independent studio Big Machine Records. Soon, the tenth studio album, Heaven, Heartache, and the Power of Love, came out; it could boast many flattering reviews.

At some moment, the artist did not want to limit herself to music. She debuted on the screen in the 1994 TV series Dr. Quinn, Medicine Woman and started regularly acting in the legal drama JAG. 2012 opened a new page in Yearwood’s career: she hosted her own show, Trisha’s Southern Kitchen, where she revealed many secrets about salad dressings and other delicacies. Although the new projects put music aside for a while, Trisha was not going to abandon it. In 2016, fans welcomed the album Christmas Together with Garth Brooks, and the 13th collection, Let’s Be Frank, was presented two years later.

Trisha’s path to personal happiness has been complicated; she has been married three times.

In 1987, the celebrity married the musician Christopher Latham; the couple spent four years together, divorcing in 1991.

The composer and the member of The Mavericks Robert Reynolds became Yearwood’s next husband; the wedding ceremony was held in Ryman Auditorium, Nashville. However, this union did not make Yearwood happy. Rumors had it their break-up was caused by the man’s drug addiction.

In 2005, the singer married her old friend, the songwriter Garth Brooks. They made an acquaintance in 1987 but began close much later, in 2002. The wedding followed three years later.

The woman has no children of her own and gets on well with Garth’s daughters from his previous marriage.

The celebrity is known as an active philanthropist. By Christmas 2008, she presented the cover on “My Favorite Things” to support the Heroes at Home campaign for the military and their families.

The woman also volunteered for Habitat For Humanity along with Garth Brooks; they helped fellow Americans to restore. In 2018, Trisha was busy in Mishawaka, Indiana, where the organization solved local housing problems.

Today, the country star continues to give concerts and please fans with fresh albums. Summer 2019 brought Every Girl; its leading track was number 21st at Billboard Country Airplay. More than 25 thousand copies have been sold so far.

Trisha Yearwood’s net worth is estimated at $40 million in 2019.