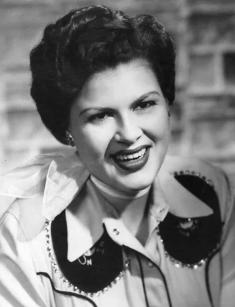 The singer was born in Winchester, Virginia, the U.S. In numerous interviews, Cline spoke out that she got along very well with her mother. Her mother said that they "were more like sisters" than parent and child.

Her father's name is Samuel Lawrence Hensley. Unfortunately, her relationships with father were awful. The girl would later report that her father sexually abused her. She told about it to her friend Loretta Lynn who told her not to say anything about it to anybody. The details of the abuse were discussed in Cline's biographical movie called Sweet Dreams.

When the family had difficulties with money, Patsy was searching for work. She had worked at an Elkton poultry factory, where she plucked and cut chickens.

When she was 13 years old, Cline got ill. The girl was sick with a throat infection. She said that this illness contributed to her success as a singer. When the disease has passed, Patsy had a very loud voice and made jokes of that. At that age, the girl became interested in singing. She started giving concerts along with her mother in the local Baptist choir. Mother and daughter also performed duets at church social events. Patsy learned playing the piano, and she excelled at that.

At age 14, she came to the local radio station and asked to take part in the audition. The DJ McCoy was amazed after she sang a song and agreed to offer her a job. During that time, Patsy participated in numerous talent contests.

Cline studied at school. But due to family problems with money, she had to stop her classes at high school and started working at Gaunt's Drug Store to earn money and help her family.

As it was said earlier, the career of a young lady began after she performed at the radio station. Later Patsy was offered to sing in a local music band. With the group, the musicians gave many concerts, and Cline rapidly started to gain popularity.

In 1954, Cline signed her first recording contract with the Four Star label.

In 1957, the singer was seen on TV on Arthur Godfrey's Talent Scouts. She sang the single "Walkin' After Midnight", which became her first success.

Same year Cline got married and had to devote much time to her kids and family. Patsy wanted to continue her career so she went to Nashville, where she started to work with Randy Hughes, and then became a member of Decca Records. It was time when her performances were getting better, and she was improving her singing. It was the most fortunate period of her life during that time.

In 1961, she was happy to sing her single "I Fall to Pieces". This hit took first positions in country music charts.

Unfortunately, after brilliant success with the song, the singer had an automobile accident and was heavily injured. Cline had to stay from music for a month and recover from the crash. Right after Cline felt herself better, she presented her next single release "Crazy" which also became a hit.

In the period from 1962 to 1963, Cline could be proud of her hits collection that included songs "She's Got You", "When I Get Through with You", and "So Wrong". The singer toured with her best songs and was warmly received in many cities.

In 1973, the Patsy Cline with her enormous talent was inducted into the Country Music Hall of Fame. In 2011, her childhood home was opened as a museum, so her fans could visit the place where she spent many years.

On September 15, 2019, the Ken Burns' documentary "Country Music" was aired on PBS. The movie featured rare footage and photographs and interviews with more than 80 country music artists, including Patsy Cline, Johnny Cash, Elvis Presley, and many others.

Cline was a woman of incredible beauty. She also had great eyebrows – something that added charm to her iconic look. Of course, she was not deprived of the attention of men.

She was married twice. She married her first husband Gerald Cline on March 7, 1953. They had met when Cline was performing with Bill Peer at the Moose Lodge in Brunswick, Maryland. Gerald Cline often brought her to the concerts where Cline performed with her songs. However, Gerald could not endure her touring schedule. Patsy admitted after the divorce in 1957, that she didn't love a man, which meant she was not as happy as she could be.

Patsy met her second husband Charlie Dick in 1956. They married in 1957. Dick was a linotype operator for the local newspaper. They eventually started spending time together and Cline began telling close friends that she fell in love. The duo had two children, a daughter Julie and a son Randy. Their relationship was considered both romantic and crazy. According to many people, their marriage was connected with alcohol, argument, pills, passion, jealousy, success, tears and laughter. It was also known, that Cline and Dick often fought. During one particular fight, Dick was arrested after they became physical with one another. After the Cline's death, Dick helped in producing several documentaries about her career.

Patsy Cline had a net worth of $10 million.

On March 3, 1963, Cline gave a concert in Kansas City. She had spent the night at the Town House Motor Hotel, because she was unable to fly out the day after the concert because Fairfax Airport was fogged in. The country star was offered to ride in the car back to Nashville, but the singer refused to do it.

The airfield manager warned Cline about bad weather conditions. He suggested that they stay the night because of high winds, offering Cline and her attendants free rooms and meals, but they decided to take a flight despite all warnings.

Cline's flight crashed in heavy weather on the evening of March 5, 1963. The plane was found some 90 miles from its Nashville destination, in a forest outside of Camden, Tennessee. Examination concluded that everyone aboard had been killed instantly.

Some of the items which were recovered were eventually donated to the museum. Among them were Cline's wristwatch, Confederate flag cigarette lighter, studded belt and three pairs of gold lamé slippers.

As the singer wanted, her body was brought home for her memorial service. Thousands of people attended the funeral. They jammed against the small tent over her gold casket and the grave to take all the flowers they could reach as keepsakes. She was buried in her hometown of Winchester, Virginia.