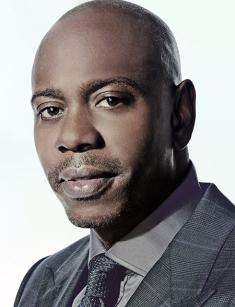 David Khari Webber Chappelle, who was born on August 24, 1973, is a Washington-native actor and comedian. Dave is best known for his iconic and acclaimed satirical sketch comedy series Chappelle's Show (2003–2006).

Born in Washington, D.C., Dave studied at Woodlin Elementary School. His parents, William and Yvonne, were politicians. By the way, William also was a professor in vocal performance. After Chappelle's parents separated, he stayed in Washington with his mother, spending summers with his father in Ohio. In high school, Dave worked as a janitor at Ford's Theatre. In 1991 he graduated from the Washington School of Art, where he studied theater arts.

Dave's career began in 1993 with a role in Robin Hood: Men in Tights. Later, he starred in minor roles in the films The Nutty Professor, Con Air, and Diamond Cop. He played his first leading role in the movie Unbaked in 1998. He became widely known after the release of a television comedy show in 2003. Comedy Central ranked him 43rd on their list of the 100 Great Aspiring Comedians.

In 2016, he signed a $20 million special deal with Netflix for a comedy release, and as of 2019, Chappelle has released five special commercials as part of the deal.

In 2019, Dave was selected to receive the Mark Twain Award for American Humor, which is presented by the Kennedy Center as America's highest honor for comedy. In 2020, the Sticks & Stones earned him his third consecutive Grammy Award for Best Comedy Album.

As of 2023, Dave has been married to Elaine Mendoza Erfe since 2001. The comedian has three children named Sulayman, Sanna, and Ibrahim. Dave and his family members reside in Ohio. Dave's religion is Islam. He converted to it in 1991.