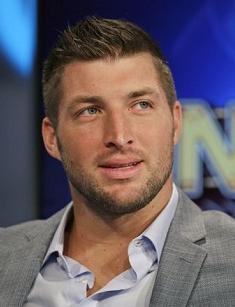 He is a famous football player with a unique style and mentality. Faith and sport always come together in the life of a young athlete. His skills often were criticized; there were highs and lows in his career, but he never gave up. Though his football career came to an end, the ending of his pro football career widened his interests and activity.

His parents met during their student years; after graduating from the university they lived in the Philippines. Here Tim’s mother Pamela Elaine contracted amoebic dysentery and fell into a coma. Only after her recovering, Pamela found out that she was pregnant. Although doctors recommended an abortion due to placental abruption, his mother gave birth to the boy on the 14th of August, 1987.

When he was three, all his family moved to Florida. Tim is dyslexic; he considers it as a gift from God and believes in his iniquity. He was grown up in Christian style, which made Timothy strong and self-confident. Even as a kid, he had the necessary for athlete nature. He had a homeschooling education.

In Media his playing was called the playing in a religious style which was very bright even at the stage of a college career. His winnings and promising career didn’t lead him to hubris. Many sports stars can’t accept criticism, but not only Tim. He expects personal attacks; the player always is ready for trials and temptations. This feature helped him both raise the professional heights and stay there. Besides, the athlete is not afraid of losing. In Tebow’s book, he described his football career as constant acceptance of critics. He could manage with such a significant pressure as he trusted in Providence.

As to sports education, he played sports in High School but never was enrolled at any school. According to Florida laws, homeschooled children can participate in the team of the local high school.

People call him an inspirational machine and become admirers of his mentality. He pronounced one of the greatest football speeches after losing to Ole Miss.

Tim gained first national recognition when he played football at school. People amazed his abilities in intensive competitiveness, running, and throwing. In one game he suffered leg injury, the athlete played the entire match. As it turned out, he played with a broken fibula; the football player was called Florida’s player of the year.

When the young athlete got an athletic scholarship, he started playing for the famous football team in Florida. He began as a backup, then played as a key contributor and finally became a quarterback.

His college football career was outstanding and brought him numerous awards, records and recognition. When he played for the college football team, he often wore references to biblical verses on his eye black. Thus, he wore John 3:16 on his eye black in 2019. This verse was the highest ranked Google search over the next 24 hours. His speech about this story is above inspiration.

Despite all his college success and authority sports critics didn’t believe in his abilities. Thus, one analyst said that he didn’t think he could be a full-time quarterback.

The Denver Broncos chose Tim in the first round of the 2010 season and signed a five-year contract to play second string behind Broncos QB Kyle Orton. In 2011 Tebow became Bronco’s starting quarterback. Here the athlete led the team to six wins in their next eight games and into playoffs. The Broncos lost to New England Patriots in the division championship game.

In 2012 Tim was traded to the New York Jets. This news brought a firestorm in media and Tebow came across critics and scrutiny again. He participated in only 72 offensive snaps with the New York team.

In April 2013 he was released by the New York Jets as it couldn’t find a trade partner for the player. In June he signed a two-year contract with the New England Patriots. However, he was released after 12 weeks as a quarterback. That year all NFL teams had to cut their rosters.

Tim Tebow shared his experience of dealing with critics:

“You’re always going to have critics and naysayers and people that are going to tell you that you won’t, that you can’t, that you shouldn’t. Most of those people are the people that didn’t, that wouldn’t, that couldn’t. Don’t be defined by outside sources. You go after your dreams,” he told the media Saturday.”

Although Tebow became a broadcaster in 2013, he continued to find opportunities to resume his professional football career. In 2015 he signed a one-year contract with Philadelphia Eagles but didn’t show a prominent playing and was released several months later.

The footballer always knelt and prayed before games; his preparation for the game was named “Tebowing”. It became both a neologism and a cultural phenomenon.

Today Tim Tebow is a professional baseball player. In May his team The Mets played with Louisville Bats. Tim Tebow’s spring training (2019) you can see on the video below.

Tebow’s autobiography was released in 2011. The book was immediately included in the bestseller list. It is both about his religious experience and sports career. He also published a book for young readers.

He is a spokesperson for Nike; besides, the athlete became a hero of the documentary. Tim also appeared on two controversial ads. In 2016 Tebow participated on Lip Sync Battle.

In 2013 he became a college football analyst. He worked as a co-host of SEC Nation. In 2017 he signed a multi-year extension of his contract with ESPN.

Tebow produced and starred at the sports drama “Run the Race”. The movie was planned to come out in February 2019.

Tim Tebow has a good relationship with former NFL stars. He was deeply affected after the death of Aaron Hernandez. Tim was sorry that didn’t help him in his life.

In the Philippines, he preached at schools and villages, assisted with medical care. In the USA, Tim shares his faith in prisons and schools. He holds faith-based abstinence and publicly stated about the maintenance of virginity. He is known for his leadership in the Fellowship of Christian Athletes, which states that sex outside marriage and homosexual acts are unacceptable. In 2019 he visited Bob Jones University to tell about his sports career and Christianity.

The footballer is engaged with Demi-Leigh Nel-Peters.

In 2019 he visited Jesus' Tomb in Jerusalem on Easter and shared his feelings on Twitter. He took part in Passion city church events.

In 2019 there was the other scandal around president Donald Trump. He was forced to close the Trump Foundation, which was used illegally. What interesting, among assets there was a Denver Broncos helmet by Tim Tebow which cost Trump $12, 000.