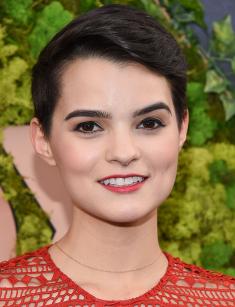 Brianna Hildebrand is a young, charming actress from the United States. She does not talk much about her family and personal life, and there are many rumors in the media. The audience remembers the enigmatic artist for the role of Negasonic Teenage Warhead in the movie Deadpool.

Brianna Caitlin Hildebrand was born on August 14, 1996, in Texas. Little is known about the woman’s early life: she does not reveal the information about her childhood and relatives. She mentioned her parents on Twitter in 2016:

“When I was little, we went to Hawaii & I made my parents call me Jamie”.

Brianna also gave no details about her education. She took an interest in acting early, though, and joined a school drama club to participate in performances. Hildebrand debuted on the screen at the age of 18.

The 2014 web series Annie Undocumented was the actress’s first project; she played Jen there. The same year, the project was named the best web series at the New York TV Festival.

The next year was marked with the movie Prism and the short movie The Voice Inside; Hildebrand also produced the latter project. In 2016, the youth movie First Girl I Loved was released; it was the story of a young woman who fell in love with another girl.

Brianna personified a mutant who could see the future and transform into a fireball destroying everything. Warhead is an apathetic teenager who shows few emotions and joins the adventurous team of fighters for the truth. In 2016, the role brought the actress the Teen Choice Awards – Choice Movie: Breakout Star nomination.

The actress did not have to change her appearance for the role: on the contrary, her character looked similar to how Brianna looked outside a movie set: a tomboy with short hair and piercing. According to Hildebrand, the length of her hair does not identify her gender. Still, there are some old pictures on the Internet: the actress used to have long curly hair.

In 2017, Brianna appeared in the horror Tragedy Girls. It is a scary story about the girls who dreamed of Internet popularity and brought themselves to a murder. Besides, the actress participated in another horror project, the TV series The Exorcist; she played Verity in the second season. Critics appreciated the series and emphasized the tense narration with horror elements and proper special effects.

Brianna identifies herself as queer and rejects gender identities; she is strongly against gender-related stereotypes. There are no nude pictures of the actress on the Internet.

In 2016, the actress told her fans she had a girlfriend: she published various posts, like

“I'm trying to sleep, but my girlfriend won't stop playing Family Feud on her iPhone”

“Last night my girlfriend and I told ourselves that we bought 6 bags of Milk Chocolate Cadbury Eggs because Easter”.

In August, Brianna posted a picture on her Instagram: she was kissing her beloved one on her forehead. The girlfriend’s face was not seen; however, the gay couple seems to be of the same age. Hildebrand does not reveal her partner’s name and avoids talking about her in interviews.

Earlier, Brianna said she was in love with Ryan Reynolds; she even made a Photoshop picture where they were together. The actor became Hildebrand’s inspiration when she was working on her first movie. In 2015, the artist had the chance to see her icon alive: they met at the movie set of Deadpool.

Before Deadpool proved to be a success, its creators decided to release the second part. Brianna played the student of the X-Men again. The premiere of Deadpool 2 took place in May 2018.

Hildebrand likes the daredevil Negasonic Teenage Warhead; she often asks her manager to find her a role of a male character. However, producers do not support this idea: despite her short hair, they believe Hildebrand is too hot and sexy to play a boy.

The persistent actress is not giving up. She plans to work on may projects and personify characters of various genders. Brianna’s colleagues appreciate her talent, diligence, and devotion to her job.

Hildebrand does not limit herself with acting: she wants to be a musician as well. She posted several touching covers on Ed Sheeran’s songs where she was singing and playing the guitar.