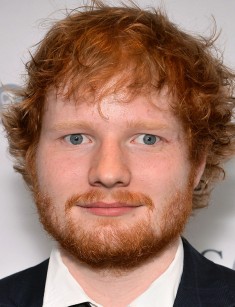 Ed Sheeran is a famous person of British origin, an actor, a songwriter and performer in one person. Hi, the full name is Edward Christopher Sheeran. This guy with a small red beard who is 173 cm high became a world celebrity in 2011. His single "The A Team" has brought him popularity. Among all presented music in the British official charts of that time, his disc turned out to be one of the best.

The future hero of the British charts was born in the small town of Hebden Bridge situated in West Yorkshire. He was born on the 17th of February, 1991. However, hardly was Ed Sheeran born, he found himself in another place – in the town of Framlingham at the will of his parents. His father is Irish, and his mother has English roots. This town appeared to be a middle of nowhere, even in comparison with the first one. The population reached 3000 people here. Here the guy spent all the childhood and a couple of young years.

Nevertheless, little Ed was rather often accompanied by the global cultural environment. His father John was engaged in the art sphere. He was a curator and a teacher. Ed's mother Imogen was a jewelry designer by her profession. In the course of their work, his parents visited London quite often and always took here their children - Ed and his elder brother Matthew. Such visits involved visits of the concerts with the participation of the stars.

When remembering his childhood, the famous actor and musician always with pleasure tells about the concerts of the performers whom he has been happy to see and hear in his childhood: Bob Dylan, Eric Clapton, Van Morrison, Paul McCartney, Damien Rice, Nizlopi, Eminem. They were idols. All of them have inspired Ed in his creative work, and the personality of Van Morrison became the first sign in Ed’s arising musical career.

At the age of sixteen Ed decided to finish his studies at school and to go to London. His only purpose was to promote himself as a musician. Ed Sheeran mastered playing the guitar at the age of four. He managed to continue to improve his music skills which he already had thanks to the fact that he entered the National Youth Theatre in London. There Ed spent a couple of successful years. Since 2009 he gained and improved his professional skills and composed songs.

In 2011 the guy independently released a couple of the compositions within the cooperation project No. 5. With his songs, he was noticed by Jamie Foxx and Elton John what resulted in the fact that he concluded the contract with Asylum Records. The debut album of the young British musician came out on the 9th of September, 2011. The same year there was released a video in collaboration with Rupert Grint. It was the single "The A Team" which was included to the first album and brought the singer and the musician the prize of Novello Award.

In a year, in 2012, Ed Sheeran slowly became to be popular not only in Great Britain but beyond its borders as well. The new album came out in June 2014 and at once reached the first positions of American and British charts. It got better and better. In 2015 the British performer and musician received Brit Award as Best Songwriter of the year. In 2016 one of his compositions under the title "Thinking Out Loud" got two Grammy awards at once. Even Taylor Swift was excited with such results.

The year 2017 began with the release of the album "Divide." The album "Divide" was noted by one more hit which debuted in American and British markets and even in other countries. The audience especially appreciated the composition "Share of You " and one more song under the title "Castle on the Hill" which was not less exciting. Both of these songs were on air for the first time in January 2017 and instantly broke the records of all hits in Germany, Australia, and England. By the way, the same year 2017 Ed Sheeran was included to Debrett’s list which unites the influential people of Great Britain.

The successful set of circumstances in Ed’s creative career has given him more opportunities. In 2011 the guy pursued a farm in the Region of Framlingham and got engaged in its arrangement. He hoped to have a family in the nearest future. Three years later he bought one more real estate. That time it was situated in London. There, in the southern part of the cosmopolitan city, the musician pursued a house.

In 2011 the destiny brought Sheeran together with the Scottish singer – Nina Nesbitt. But their relations appeared not to be long-lasting. The musician dedicated to this woman two of his songs from the album "Peroxide" called "Photographer" and "Nina." His relations with another woman – a Greek from America - Athina Andrelos also didn't last for long. They got acquainted in 2014, but a year later the young couple broke up. After this relationship, Ed had to write one more "love" composition under the title "Thinking Out Loud."

Cherry Seaborn appeared to be next girlfriend in the life of the famous actor and musician. She was his former school girlfriend. This time their relations are expected to be more close and stable. They have been together since 2015 and still have good relations. There is some interesting detail of their relationship - it is the fact that the musician likes cats and his beloved hockey player loves them as well. Both of them have cats as their pets. By the way, the musician dedicated to his girlfriend the song "Perfect" which entered the album "Divide" released on the 3rd of March, 2017.

The daily life of Ed is connected not only with his cares about the cats and his beloved Cherry (Cherry Seaborn). He continues his tradition of visiting tattoo salons. In total amount, the British performer and musician have more than fifty color tattoos on his body. The guy regularly meets his admirers among whom Ellie Goulding and Niall Horan have a special place. Due to his videos (for example, "Share Of You"), Ed demonstrates new tattoos on his body.

After Christmas of 2017, the British musician announced the end of his so-called "creative laziness" and began to "give out " his singles from the album "Divide" with a vengeance. In the beginning, he planned to give the composition "Share Of You" to Rihanna. However, feeling creative inspiration, he has changed his mind and at present performs this song himself with great pleasure.

Alongside, Ed Sheeran takes part in the shooting of the series Game of Thrones where he acts together with the actress Maisie Williams. So, in such a way lives the star of the British charts, one can say, on the sheets of one more popular composition of him - "Afire Love." 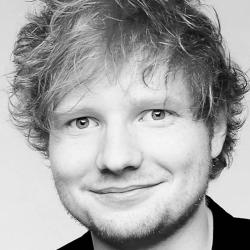