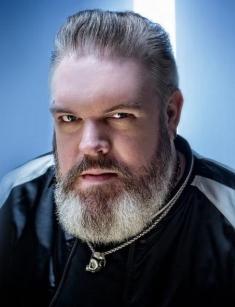 The homegrown talent of Nairn gets expression in different spheres – music, acting, and producing. His life was successful while he was playing DJ sets at the most important festival and venues, but his first role on TV Kristian's life took a different, even much prolific turn.

The actor was born in Belfast, which he calls the lovely city home. As a kid, he was a metalhead and dreamt of becoming a guitar player. As Nairn says, he was crazy about guitar and studied so much that can play on a level of favorite players such as Jake E. Lee, Ty Tabor and others.

Unfortunately, there is no information about his family and parents. But sometimes the actor shares his thoughts and memories in interviews. Thus, in one interview, the actor said that he was partially deaf in his childhood. This fact helped him to play the most popular character Hodor in Game of Thrones.

He also drew his real-life experience, as his life in Belfast was tough. As a teenager Nairn had to face violence, when he attended a college. He told that every week there was evacuation with a bomb. And sometimes it would actually go off and people had to lie on the floor in debris, and worse, some people were maimed.

He calls this time pretty dark and considers that is the reason why Irish people have unique since of humor. Nairn considers Belfast his lovely home anyway.

First of all, Kristian is an accomplished DJ, who has been prolific resident house DJs for the last 20 years. He played alongside Steve Aoki, Fatboy Slim, Danny Howard and others; he also worked at the biggest festivals and venues all over the world. For eleven years he held the residency in Kremlin, an enduring venue in Belfast.

His video set at Café Mambo viewed more than 84,7 million people in 72 hours across all the major social media platforms. He played wonderful shows in various states, Austin, Los Angeles, Denver and Indianapolis among them. He describes his music style as "Chunky, Deep, Dark, Always with Attitude."

His acting career started from the role of Hodor in popular TV series "Game of Thrones." The people much loved his character and helped him to obtain a large international fan base.

Hodor is a sweet, loyal half-giant, not a fighter, who can pronounce only few words. His story is full of drama which separates so much from other hate-to-watch characters. Nairn said that there was no one else like Hodor on Game of Thrones with that warmth, humanity and a little bit of comic relief.

The actor in the role of Hodor took part in the scene, becoming one of the pinnacles of nudity in the HBO show. In one episode he appeared nude and flushed his half-giant wang. Nairn told that the experiment with a fake penis was one of the weirdest in his life. The actor shared that this penis was made out of latex, and it was very realistic-feeling. It was definitely beyond human—about sixteen inches. Besides, they were filming in Belfast and there were about 200 people around the naked actor.

He took part in the GOT in 2011-2014, 2016. The actor didn't feature in one season, because Hodor and Bran don't appear in the two books of George Martin. In 2017 he got the MTV Movie + TV Award nomination in the category of Tearjerker for his role in "Games of Thrones."

Nairn also featured in the film "Ripper Street" where he portrayed the role of Barnaby Silver. He also appeared in several movies and on TV.

Today he uses DJ name "Kristian Nairn" of "DJ Hodor." Now he is a DJ playing sets at clubs all around the world. Nairn is playing vocational house and progressive EDM. He tours the UK, the USA, and Australia with his club show "Rave of Thrones."

In 2014 Nairn gave an interview and discussed his gay identity. Media counted this interview as Nairn's coming out. The actor is prone to keep his life and salary in secret. His net worth is about $500, 000. Nevertheless, Nairn is active on social media, especially on Twitter and Instagram. There is no information about Kristian Nairn's boyfriend on the Internet.

The actor attracts much attention due to towering height and affinity for fashion. He uses to show oh the red carpet in a bespoke ensemble from head-to-toe. He has a face tattoo.

His character Hodor in Game of Thrones can't speak anything for exception one word "Hodor." But ironically the actor is quite verbose off-screen. He is a fan of comic books and science-fiction genre.