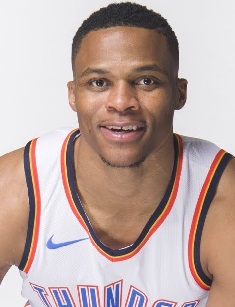 Russell Westbrook’s birthday is on November 12, 1988. This popular American basketball player played for Oklahoma City Thunder under the National Basketball Association (NBA). He is awarded with eight-time “NBA All-Star” and two-time “All-Star Game Most Valuable Player” in the year 2015 and 2016 respectively. Seven times he became the part of All-NBA Team and steered the league with high scoring in 2014-2015 and 2016-2017 seasons.

Westbrook holds the record of being the second player in the history of NBA who averaged a triple-double in the 2017 season. The first and only other person having this record is Oscar Robertson. He has also established a record with 42 for the most triple-doubles in a season. He was announced as “NBA Most Valuable Player” for the year 2016-2017. In the next two seasons he again averaged a triple-double and led the league in assists as well. This made him the first player who has led the league in assists and points in numerous seasons.

Westbrook had also been a part of the college basketball team “UCLA Bruins” and had received third-team all-conference honors in the Pac-10. He made it into the 2008th NBA draft for the Seattle SuperSonics. Later the team relocated to Oklahoma City. He had twice the honor to represent in the United States national team; once in 2019 FIBA World Championship and once in 2012 Olympics. He has won couple of gold medals in 2010 FIBA World Championship.

Russell Westbrook’s dad is usually referred as Russell Westbrook Jr. and his mother is known by the name Shannon Horton. Russell is the elder brother of Raynard. He spent his growing years in Hawthorne with his best friend Khelcey Barrs III.

Both of them wanted to join UCLA but sadly Barrs lost his life due to enlarged heart disease in May 2004 during a pickup game. Westbrook is a Long Beach Californian boy by birth.

Westbrook made his mark in the basketball industry after his first season because of his spectacular nick of contributing over 15 points per game. Right after that he quickly made his spot on NBA All-Rookie First team. After his third season, he established himself as the 5th player in the league’s history to gain 1000 rebounds, 4000 points and 1500 assists. Russell Westbrook and Kevin Durant worked together as mentors for a young thunder team. The exciting team made it into the 2011 Western Conference Finals.

In 2011-2012 season, Russell averaging of 23.6 points per game made it possible for the Thunder to qualify for NBA finals against the Miami Heat. Kevin Durant and LeBron James were performing well in this season but it was Russell Westbrook who stole the limelight because of his extra ordinary drives and fierce play. He was awarded with an Olympic gold medal in the summer after being a part of U.S. men’s basketball team.

The 2013 playoffs brought up the health issue of torn meniscus for Russell. He had to go through a knee surgery to solve the problem. Couple of months later he went through another surgery which broke his streak of being a consecutive regular player for 394 games of the season. He joined the team again during the 2013-2014 season but he had to go through another knee operation in December, which resulted in two months absence from the game.

Russell Westbrook’s career stats are quite interesting. He had been criticized a lot for not passing the ball enough as a point guard. In 2014-2015 NBA season Kevin Durant had a foot injury issue, because of this matter Russell became team’s top scoring option. His 41 points made the team win All- Star MVP honors. During the next 8 games he scored six triple – doubles which made the team led the league with an average of 28.7 points per game.

Westbrook is popular for his skills as an athlete bud did you know he also has incredible sense of style? His clothes are colorful and creative. He joined hands with a luxury department store named “Barneys New York” and brought out his own clothing line for sale. Russell Westbrook clothing line was named “Westbrook XO Barneys New York line” and it came out in the market in 2014. His other business venture includes “Westbrook Frames eyewear brand.” During 2015, he was officially announced as a marketing creative director of “True Religion’s” spring campaign. Later, he launched a new clothing line with this company in March 2016.

“Russell Westbrook Why Not?” Foundation came to existence in year 2002. Russell founded it to secure the family service packages and to support community based education. He is a fan of modern age video games and bowling. He loves taking out time for his family.

Russell Westbrook contract with Jordan Brand was signed in October 2012. He made his commercial debut with Jordan Brand and Champs. His other brand endorsement includes Kings and Jaxs Boxer Briefs (2013). Once he officially stated that he always loved fashion and that working with Kings and Jaxs was a natural fit as they both have fearless and creative approach when it comes to style." Meanwhile, on February 2015, Russell Westbrook was appointed as” Marketing Creative Director” by a famous denim brand called “True Religion.” The same year, he became the brand ambassador for “PepsiCo” and was their international face of Mountain Dew Kickstart.

Khelcey Barrs was a close childhood friend of Russell. To honor him, Russell prefers to wear a pair of sneakers and wristband both of which have “KB3” engraved on it. Russell Westbrook’s wife, Nina Earl, also happens to be her college sweetheart. They got married on 29th August, 2015.

Their first baby boy Noah Russell Westbrook was born on 16th May, 2017. Their next children were twin daughters, who were born on 17th November, 2018.

Russell Westbrook’s net worth is estimated to be around $125 million. Up till now his total salary earnings are below $100 million. His current per annum earning is $26 million.