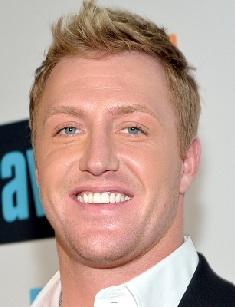 Kroy Biermann is a former professional player for Atlanta Falcons until 2015. He was born on September 12th, 1985 in Hardin, Montana. His full name is Kroy Evan Biermann. He played American football from defensive end and was also an outside linebacker. Kroy Biermann height is 6ft 3 and he weighs 255 lb (116 Kg). He has blue eyes and blonde hair.

Kroy Biermann is the son of Keith and Kathy Biermann. His ethnicity is white and holds American nationality. He has two siblings - Krista and Kelsey. His older sisters and his parents all have names starting with the alphabet "K." Kroy Biermann’s parents had a hard time in searching his name. His mother even checked a phone book to pick a name that starts with the letter K and she chose Kroy.

Kroy Biermann’s wife name also starts with “K” - Kimberleigh Marie Zolciak-Biermann. He has six children including two from his wife’s previous marriage – Ariana Biermann(17) and Brielle Biermann (21). The daughters were officially adopted in July 2013 after applying in March 2013.

Kroy Biermann attended Hardin High School in Hardin, Montana. He was more into football, wrestling, and track. In wrestling and football, he was team captain. Kroy Biermann later joined the University of Montana and he started playing career games.

In 2005, Kroy Biermann played in all 12 games. He had 7 sacks and was fifth-leading tackler in the team. In 2006, he had 11 sacks and 13.5 tackles. Biermann was voted a Second-team Little All-America selection and later earned First-team All-Big Sky Conference.

In 2007, Biermann received the reputed Buck Buchanan Award and became the first-ever recipient of the award from Montana. In 2008 Hula Bowl, he played as an outside linebacker.

Even though Kroy Biermann is shy but his marriage was a reality TV affair. In 2010, he participated in “Dancing Stars of Atlanta”. This was a charity event and he was there to raise money for Alzheimer's disease. He met Kim Zolciak and from where they started dating. In season three of The Real Housewives of Atlanta, their meeting was shown. They started a relationship and Kroy Jagger (KJ), was born six months before their marriage on May 31st, 2011. Kroy Biermann’s wedding was held at their Roswell, Georgia home on November 11th, 2011.

Kroy Biermann’s son Kash Kade was later born on August 15th, 2012. He was blessed with twins Kaia Rose and Kane Ren on November 25th, 2013. Kroy Biermann and his parents are not on good terms as they opposed his marriage with Kim Zolciak because she had two daughters from her previous relationships.

Kroy Biermann commenced his career in Football against San Diego Charges. He played for Atlanta Falcons in 2008 NFL Draft. In November 2009, he scored first NFL touchdown in the game played against the New Orleans Saints. He was in good form till September 2013 until Kroy Biermann’s injury of a torn tendon forced him to rest the 2013 season.

In 2015, Biermann received a new contract from the Atlanta Falcons offered. He recovered from Achilles tendon surgery and played many games in 2014. He led the Falcons defense with 4.5 sacks. This one year contract was worth $1.9 million in addition to $500 thousand as a bonus. The contract also included a guarantee of another $500 thousand. In 2015, he finished the season with 55 tackles and 2.5 sacks.

In 2016, Kroy was offered a new contract from Buffalo Bills for one year. However, the contract was released only for one month due to final cuts. In the prime of his football career, Kroy Biermann was named as the Naismith Prep Player of the Year. He also won a gold medal which is worth more than $1.2 million.

He won First-team All-Big Sky in addition to Little All-American in 2006 and 2007, respectively. Kroy Biermann’s achievement also includes winning of Big Sky Defensive MVP in 2007 and Buck Buchanan Award in the same year. Kroy Biermann in his career played in total 52 games with 220 tackles, 32 sacks. 45 tackles for loss and 9 forced fumbles. Kroy Biermann is not signed with any team now and works as a free agent.

Kroy Biermann’s net worth is approximately 20 million and a yearly income of $5.5 million. When he played the games, his salary was speculated to be around $2.5 million per year. He signed many contracts and deals with some of the reputed Football teams that include the Los Angeles Clippers apart from Buffalo Bulls.

In 2014 and 2015, Kroy Biermann’s salary was claimed to be $2.4 million and $3.1 million, respectively. His one year contract with Buffalo Bulls offered $1,925 million that included a $500,000 bonus. Kroy Biermann shared on social media via Instagram his 4-car garage that includes a 4 wheeler expensive desert bike. Kroy Biermann’s car includes brand new Porsche worth $70,910. This was a birthday gift from his loving and gorgeous wife Kim Zolciak.

Kroy Biermann’s house is a 17,000 square foot crib house which is described by him as a Dream House. The cost of this lavish and luxurious house is claimed to be around $800,000. The mansion includes a gigantic swimming pool, 7 bedrooms, and a stylish 6 bathrooms. It also has a big parking lot for Kroy Biermann’s car collection which is worth $880,000. The house also has a theatre, a well-equipped gym, a spa, a basketball court, and a man cave. He owns four different cars apart from the millions of dollars worth four-wheeler expensive desert bike.

Kroy Biermann uses social media platforms like Instagram, Facebook, and Twitter, but is not much active. He rarely posts pictures of his family on social networking sites. If he does post, then it is mostly to promote Kim’s podcast, "House of Kim." However, Kroy Biermann’s family is quite active on social media, especially his wife – Kim Zolciak and his two daughters from his wife’s previous relationships - Ariana Biermann and Brielle Biermann.

Kroy Biermann’s wife once posted on Instagram and shared a story of “Wild Wednesday” when Kroy Biermann tried to break up with her. It lasted for 24 hours and later they reconciled. In April 2019, Kroy Biermann Instagram has 360k followers and he gets an average of 10k likes.

Kroy Biermann’s earnings are not centered on his salary, as he is currently not playing football. Kroy Biermann’s income also comes from his social media account especially Instagram. His each and every sponsor posts on Instagram makes a total of $1,073 to $1,788.75. He has some lucrative endorsement deals, agreements, and many promotional ads from popular brands – Calvin Klein, Don’t be Tardy, Itunes, etc. Kroy Biermann’s business is not much known but he earns from the sponsorships and investments.