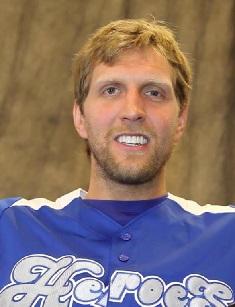 Dirk Werner Nowitzki is a German professional basketball player who performed for the American team Dallas Mavericks from 1998 to 2019. He has played on the power forward position for more than 20 years and has earned many titles and awards for such a dedication. So, nowadays the player is one of the greatest power forwards of all time and widely considered to be the greatest player in Mavericks history.

Dirk's home city is Würzburg, Germany – he was born there on June 19, 1978. Almost every member of his family is an outstanding sportsman: his mother Helga Nowitzki (née Bredenbröcker) played basketball professionally, his father Jörg-Werner played handball and even represented Germany in international championships. Dirk's elder sister Silke Nowitzki was a winner of local championships in track and field. Later she became interested in basketball due to her mother. She is currently working for the NBA in International TV.

Dirk was the highest boy among the peers. Initially, he dedicated himself to handball and tennis but had to give it up because other children called him a "freak" for his height and massive size of shoes. As a result, Dirk started playing basketball – the kind of sport where a tall stature is necessary. The boy joined a local team DJK Würzburg where showed excellent results.

His talents were noted by former German international basketball player Holger Geschwindner – he offered to coach individually. When Nowitzki and his parents agreed, Holger elaborated a personal training scheme: he emphasized shooting and passing exercises, shunned weight training and tactical drills. Holger became a second father for Dirk: besides sport, he introduced music and literature to him to develop his personality.

One year later, Dirk impressed the coach by his progress. The latter offered him to train every day to conquer the international sports championships. Nowitzki mused upon it for 2 days and agreed. So, he started training with DJK Würzburg players and future German internationals Robert Garrett, Marvin Willoughby, and Demond Greene. In the summer of 1994, then 16-year-old Nowitzki joined the DJK squad.

There his first coacher was Pit Stahl. School bad marks disturbed Dirk, and he thought to drop out of school. In the 1995–96 season, he performed as a starter. In a DJK game, the player recorded 24 points, and basketball coach Dirk Bauermann said: "Dirk Nowitzki is the greatest German basketball talent of the last 10, maybe 15 years."

In the 1996–97 season Nowitzki helped the team finish second after the regular season. The German BASKET magazine called him "German Basketballer of the Year."

In 1998 the player took part in the Nike Hoop Summit. In the matches, he recorded 33 points on 6-of-12 shooting, 14 rebounds, and three steals and won future US NBA players, Rashard Lewis and Al Harrington. His quickness, ball handling, and shooting provoked interest to him from many European and NBA clubs.

In 1998 Nowitzki didn't enter a college but applied for the NBA draft where the Milwaukee Bucks selected him but immediately traded him alongside point guard Steve Nash to the Dallas Mavericks in a multi-team deal. The sportsmen got on well.

In his debut NBA season Nowitzki performed as a power forward by coach Don Nelson. The player felt embarrassed cause there were more athletic NBA forwards and he was a lousy defender. He has even got the nickname "Irk Nowitzki" without “D” which means “defense” in the sporting slang. His average results were not impressing - 8.2 points and 3.4 rebounds in 20.4 minutes of playing time. The Bucks won only 19 matches of 50. Dirk even thought about returning to Germany.

In 2000 the team was sold to the billionaire Mark Cuban for $280 million. The new owner started developing the franchise, investing money, looking for new members. Cuban bought the team the $46 million six-star Boeing 757 to travel in. These changes influenced Nowitzki, and he began to improve his stats. So, in his second season, the sportsman made 17.5 points, 6.5 rebounds and 2.5 assists per game in 35.8 minutes. He was voted runner-up in the NBA Most Improved Player Award behind Jalen Rose and made it into the NBA All-Star Sophomore squad. The Mavericks' season record was 40-42.

In the next season, Nowitzki showed improvements again: he recorded 21,8 points, 9,2 rebounds and 2,1 assists per game. The player took part in every one of 82 games. In 10 of them, he got at least 10 points. By the way, his best friend Nash became a valuable point guard. Dirk, Nash and Finley, were called the "Big Three."

In this season the team's record was 53-29. So, they got to the playoff for the first time since 1990. There the Mavericks faced the Utah Jazz and the San Antonio Spurs. In Game 5 Dirk made 18 rebounds and 42 points, but his team lost with the score 105-87.

In 2001 Nowitzki signed a $90 million contract extension with the club. In this new season, the Mavericks reached the playoff again but lost the Game 5. Dirk's average results in the season were 33.3 points per game.

In the 2002-2003 the Dallas Mavericks managed to win the first 11 matches. Nowitzki made 25.1 points, 9.9 rebounds and 3.0 assists per game on average. The team set a new record – 66-20. They performed at the Western Conference Finals where fought against the Spurs. In Game 3, the player collided with Manu Ginóbili's knee and got injured. So, he had to miss the next games which his club lost.

In the next season, Dirk Nowitzki played as a center. To play then, he put on 20 lb (9.1 kg) of muscle mass over summer. Because of it, his average results deteriorated: Dirk scored 21.8 points, 8.7 rebounds and 2.7 assists per game. However, he kept on being the Mavericks leader. The player was nominated for the All-Star Game and the All-NBA Third Team. Mavericks reached the playoff where faced the Sacramento Kings again. Unfortunately, the team lost five games and left the playoff.

In spite of the changes, Mavericks played unsuccessfully in the playoff. So, they lost Game 6. In the Western Conference Semi-finals, the Mavericks lost to the Phoenix Suns.

In 2005 Dirk was the only player left from the Mavericks' "Big Three": Michael Finley was waived.

His season stats were 26,6 points, 9,0 rebounds and 2,8 assists per game.Totally, in the season Dirk recorded 2000 points – for the third time in his career. Interestingly, his 26,6 points were the highest in Europe.

The Dallas made 60 wins and reached the playoff. In the first round, they faced the Memphis Grizzlies. The team performed with success and got to the Western Conference Semi-finals where had to fight against the San Antonio Spurs. Due to Dirk's skills the Dallas won and reached the Western Conference Finals. There they played against the Suns. Nowitzki made 50 points and led the team to the 2006 NBA Finals. Unfortunately, there they were defeated by the Miami Heat.

In the 2006-2007 season, Dirk averaged 24,6 points, 8,9 rebounds, and 3,4 assists. Mavericks won 67 matches and advanced to the Western Conference where were beaten by the Warriors. Nowitzki subsequently got the Most Valuable Player award – he was the first European sportsman to earn it.

In the next season, Dallas reached the playoff again and got the seventh place in a highly competitive Western Conference. Dirk registered 23,6 points, 8,6 rebounds and 3,5 assists per game. Also, he made his first triple-double of 29 points, ten rebounds and 12 assists in the match against the Milwaukee Bucks. In the playoff, they performed against the New Orleans Hornets which were strong opposers due to Chris Paul and lost five games.

Dirk closed the 2008-2009 season with 25,9 points, 8,4 rebounds and 2,4 assists per game. In the playoff, his team defeated the San Antonio but was later beaten by the Denver Nuggets.

In the 2009-2010 season, famous Shawn Marion and Caron Butler joined the team. On January 13, 2010, the player was called the 34th NBA player to score 20 000 points. His average season stats were 25 points, 7,7 rebounds, 2,7 assists, and one block. Having lost the match with the San Antonio, the Dallas left the playoff. Dirk planned to become a free agent but was offered to sign a 4-year $80 million contract to stay in the Dallas and agreed.

In the 2010-2011 season, Dirk got injured, missed nine games but finished with average results of 23 points, seven rebounds, and three assists. Having recovered, the player took part in the All-Star game. In the playoff, his team defeated the Portland and the Lakers in the semifinals.

In the final, they played against the Oklahoma City Thunder. In Game 1, Nowitzki registered 48 points. In Game 4, he made 40 points. In Game 5, the Dallas Mavericks got the Western Conference title.

In the playoff final they fought with the Miami Heat. Playing against the skilled opposer, Nowitzki got injured - tore a tendon in his left middle finger, but kept playing. At last, the franchise won the championship for the first time.

The next season was less productive for the club. In the playoff, they faced the Oklahoma City Thunder but lost five games.

In October 2012, the player underwent knee surgery and missed first 27 matches of the new season. His first match was on December 23 – he faced the San Antonio. In spring Nowitzki became the 17th player in the NBA history to register 25 000 points. However, that time the team didn't advance to the playoff – for the 1st time in 12 years.

On January 29, 2014, the sportsman made his 26 000th points in the lost match with the Houston Rockets. In 35 minutes he got 38 points, 17 rebounds, and three assists. The Mavericks reached the playoff where lost 7 games. The Spurs became the champions.

On March 24, fighting against the San-Antonio, Nowitzki made his 10000th rebound. On April 1, the player scored the 28000th point in the match with the Oklahoma City Thunder.

In July 2016, the team signed a contract with Dirk Nowitzki again. At the beginning of the season, he had problems with Achilles tendon and had to miss several games. Later he registered the 30000th career point.

The season 2018-2019 became the last for Dirk. So, he set a record for the most seasons played with the same team. The previous person to do it was Kobe Bryant, who spent 20 seasons with the Lakers. On March 18, in the lost match with the New Orleans Pelicans, he scored the 31,419th point.

On Apil 10, he played the last NBA game with the Spurs and made a double-double of 20 points and ten rebounds.

Dirk's current net worth is evaluated at $140 million. Before his retirement, the player got a $5 million salary. His jersey's number was 41.

In 1992 Nowitzki started dating Sybille Gerer, a female basketball player from his local club DJK Würzburg. They became different people and broke up in 2002. His ex-girlfriend wanted to settle down and create a family and children, but Dirk himself didn't plan to do it till he would turn 30.

In 2010 Dirk began a relationship with Jessica Olsson, sister of twin Swedish footballers Martin Olsson and Marcus Olsson. They married on July 20, 2012, in Dirk's house in Dallas. The couple has three kids. In 2013 Dirk's wife gave birth to their daughter. In 2015 and 2016 two sons were born.