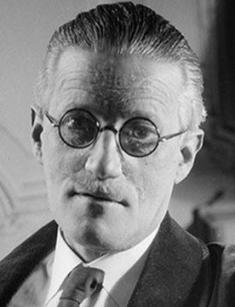 James Joyce is a famous Irish writer and poet who is considered one of the most influential authors of the XX century. The master of literature, who contributed to the development of modernism, became famous thanks to the novels Ulysses, A Portrait of the Artist as a Young Man and Finnegans Wake, as well as the stories from the Dubliners collection.

James Augustine Aloysius Joyce was a native of Ireland. He was born on February 2, 1882, in the southern district of Dublin to John Stanislaus Joyce and Mary Jane "May" Murray and was the eldest of 15 children. The family of the future writer came from farmers and owners of the enterprise for extraction of salt and lime. Perhaps, they were related to Daniel O'Connell, "The Liberator," the famous politician of the first half of the XX century.

Not having a knack for business and entrepreneur skills, the father of the future writer often switched his job. In 1893, after several layoffs, he retired, which was not enough to support a large family, that's why he went on a binge and engaged in financial fraud.

For some time John paid for James's studies at the Jesuit boarding school, and when the father ran out of money, the boy switched to home education. In 1893, thanks to his father's old connections, the future writer got a place at Belvedere College, where he joined the school Church brotherhood and got acquainted with the philosophy of Thomas Aquinas, which had been influencing him greatly until the end of his life.

In 1898, James became a student at Dublin University College and began studying English, French and Italian. The young man visited literary and theatrical circles, wrote plays, materials for the local newspaper. In 1900, a praising review of Henrik Ibsen's book When We Dead Awaken became the first publication in a two-week student review.

In 1901 Joyce wrote an article about the Irish literary theater, which the University refused to publish. It was published in the city newspaper United Irishman, thus presenting the author to the general public.

After college, Joyce went to Paris to study medicine, which was too difficult to understand and interpret. The young man followed in his father's footsteps, often changed professions, trying to find a livelihood, spent a lot of time in the National French library, wrote poetry. He soon received news of his mother's fatal illness from home and was forced to return to Dublin.

Joyce's creative biography began in 1904 when he tried to publish an essay-story entitled A Portrait of the Artist. The publishers did not like the work, and the author decided to rewrite it and make a novel out of it, calling the book Stephen Hero. It was supposed to be a reproduction of events of his youth, but soon, Joyce gave up the work on the novel.

In 1907, James returned to the drafts of the unfinished book and completely rewrote them. As a result, the year 1914 was the time when the novel A Portrait of the Artist as a Young Man was born. The book tells the story of the early years of the life of the protagonist Stephen Dedalus, which was very similar to the writer's account of his youth.

Since 1906, Joyce began to work on a collection of fifteen short stories called Dubliners, which gave a realistic depiction of middle-class life in and around the capital in the early 20th century. These sketches were made when Irish nationalism was at its peak, and they focused on Joyce's idea of human insight at the turning points in life and history.

The composition of the collection is divided into three parts: childhood, youth, and maturity. Some of the characters later turned into supporting characters of the novel Ulysses. In 1909, Joyce tried to publish Dubliners for the first time but was turned down. The struggle for the publication of the book continued until 1914 when the collection was finally released.

In 1907, James became close to one of his students, Aron Ettore Schmitz, a Jew by nationality, writer and playwright, known under the pen name Italo Svevo, who became the prototype of the hero of the new novel Ulysses, Leopold Bloom. Work on the book began in 1914 and lasted seven years. The novel became a critical literary work in the history of English modernism and the writer's bibliography.

In Ulysses, Joyce used the stream of consciousness, parody, jokes, and other techniques to introduce the characters. The action of the novel was limited to one day, June 16, 1904, and was full of allusions to Homer's Odyssey. The writer moved the ancient Greek characters Ulysses, Penelope, and Telemachus to modern Dublin and recreated them in the images of Leopold Bloom, his wife Molly Bloom and Stephen Dedalus, ironically contrasting with the original prototypes.

The book studied different spheres of life in the capital with an emphasis on its wretchedness and monotony. However, the work is a lovingly detailed description of the city. Joyce argued that if Dublin were to be destroyed in some disaster, it could be rebuilt, brick by brick, through the pages of the novel.

The book consists of eighteen chapters that cover approximately one hour of the day. Each episode had its own literary style and correlated with a specific event of the Odyssey. The main action took place in the minds of the characters and was complemented by stories of classical mythology and sometimes obsessive external details.

Portioned publication of the novel began in March 1918 in the New York magazine The Little Review, but after two years it was stopped because of accusations of obscenity. In 1922, the book was published in England under the patronage of editor Harriet Shaw Weaver. An interesting fact: soon after the novel was banned, 500 copies of the book sent to the United States were confiscated and burnt at the British customs.

Having completed the work on Ulysses, Joyce was so exhausted that he did not write prose for a long time. On March 1923, he came back to his creative art and started working on a new book. By 1926, James had finished the first two parts of the novel Finnegans Wake, and in 1939 the book was published in full. The novel was written in a peculiar and obscure English, based mainly on complex multi-level puns.

The reaction to the work was mixed. Many criticized the book for being unreadable and for lack of a single thread of the narrative. Defenders of the novel, among whom was the writer Samuel Beckett, talked about the significance of the story and the integrity of the images of the central characters. Joyce himself said that the book's perfect reader could be a person with insomnia, who, after completing the novel, turned to the first page and started again.

In 1904, Joyce met Nora Barnacle, a Galway woman who worked as a hotel maid. Young people fell in love and left Ireland together in search of work and happiness. The couple first settled in Zürich, where James was listed as a teacher at a language school. Then Joyce was sent to Trieste, which was at that time a part of Austria-Hungary, and was appointed to the position of English teacher in the classroom, where he trained naval officers.

In 1905, Nora gave birth to her first child, a boy named George (known as Giorgio). In 1906, tired of the routine life in Trieste, Joyce briefly moved to Rome and got a job as a clerk in the bank, but he did not like it there. Six months later, James returned to Nora in Austria-Hungary and managed to come just in time for the birth of his daughter Lucia in 1907.

Joyce and Nora's financial situation was complicated. The writer could not fully devote himself to creative work, as he had to earn a living. He was a representative of the film industry, tried to import Irish fabrics into Trieste, did translations, gave private lessons. The family occupied one of the main places in the writer's personal life, despite all the difficulties, he remained with Nora until the end of his life, who became his wife 27 years after he met her.

In 1907, James began to have vision problems, which later required more than a dozen surgical operations. There were suspicions that the writer and his daughter had schizophrenia. They were examined by psychiatrist Carl Gustav Jung, who concluded that Joyce and Lucia were "two people heading to the bottom of a river, except that Joyce was diving and Lucia was sinking."

In the 1930s, money problems retreated to the second plan thanks to Joyce's acquaintance with the editor of the Egoist magazine Harriet Shaw Weaver. She provided financial support to the writer's family, and after his death paid for the funeral and became the manager of his property.

On January 11, 1941, Joyce underwent surgery in Zürich to remove a duodenal ulcer. The next day he fell into a coma. On January 13, 1941, he woke up at two a.m. and asked the nurse to call his wife and son before fainting again. Relatives were on their way when the writer died, less than a month before his own 59th birthday. The cause of death was a perforating ulcer.

Joyce was buried in Fluntern Cemetery, Zürich. The body was initially buried in a common grave, but in 1966, after the Dublin authorities refused to allow relatives to transport the remains to their homeland, they created a memorial of the writer on its place. After a while, near the tombstone with engraved quotes from the books of the Dublin modernist, a monument was erected, which looked strikingly similar to the author of Ulysses.

"Beauty of music you must hear twice. Nature and woman - half a look."

"The thought that the other chap pays is the best sauce in the world."

"A man of genius makes no mistakes; his errors are volitional and are the portals of discovery."