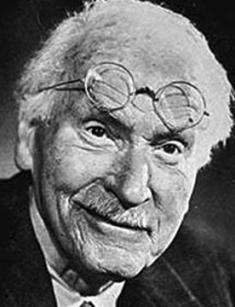 The creator of the free association technique, the Swiss psychologist and philosopher Carl Jung is known for his books Man and His Symbols, The Archetypes and the Collective Unconscious, and Memories, Dreams, Reflections. Jung’s teachings are based on the terms “introversion” and “extraversion”. According to the scientist, each person may be turned to either inner world (introversion) or the exterior environment (extraversion).

Jung identified psychological types and gave a formula of a person’s soul in the scientific context. The psychologist’s works had a great impact on culture studies, comparative religious studies, anthropology, pedagogics, and literature.

Carl Gustav Jung was born on July 26, 1875, in Switzerland. The future psychiatrist’s father, Paul Achilles Jung, was a pastor in a Reformist church; the mother, Emilie Preiswerk, brought up the son.

Carl was an introverted and weird child. His unsociable demeanor and detachment were the result of his tense relationship with the father and the mother’s hysterics.

At the age of ten, Jung found a piece of wood in the street and carved a six-centimeter doll; he put it into his pencil case and hid in the garret. When the father’s temper or the mother’s sensitivity were too excessive, the boy would go there and speak a secret language to his self-made friend. This behavior was the first manifestation of the unconscious that Carl described in detail in his works later.

The parents took their son to the Humanistisches Gymnasium when he was 12. Gustav was not interested in sciences or arts; teachers complained the student lacked initiative and showed no talents. However, whenever Carl would return home, he would draw old castles and read prose. The teenager had no friends and felt the ambiguity of his personality all the time, so that he could not prove his talents. The scientist mentioned he had to selves in The Red Book.

At 16, the fog of loneliness started fading away, and depression attacks were getting obsolete. Jung took an interest in philosophy and realized what was interesting for him; he read Plato, Heraclitus, Pythagoras, and even found some of his own ideas in Schopenhauer’s works.

In 1893, Carl entered the University of Basel, School of Sciences. He not only read the obligatory literature but also discovered much interest in the mystical philosophy of Emanuel Swedenborg and Adolf Eschenmayer.

Impressed by the readings, Gustav even conducted a couple of séances. This unusual hobby helped him write his thesis On The Psychology and Pathology of So-Called Occult Phenomena. In the future, Jung came back to spiritual studies to make his commentary to ancient texts (I Ching, The Secret of the Golden Flower, and Tibetan Book of the Dead) right.

It was a difficult financial period for Jung. After the father’s death, the family had nothing to live on. Gustav attended lectures in the daytime and worked as a private tutor whenever he had some free time; this money was enough for a modest life and education payments. After graduation, Carl discovered Richard von Krafft-Ebing’s book Psychopathia Sexualis; it determined the young man’s professional future.

In 1900, Carl moved to Zurich and started working as an assistant to the then famous psychiatrist Eugen Bleuler at the Burghölzli hospital for people with a mental health condition. Gustav lived in the hospital territory and began to publish his first clinical works, as well as articles on his new method, the word association test.

1907 was marked with the first large-scale work, On the Psychology and Pathology of So-Called Occult Phenomena. Jung sent it to Sigmund Freud for reading. The scientists’ meeting in Vienna was a significant milestone in Jung’s career. By the moment of their personal acquaintance in 1907, Carl had become famous for his experiments on word associations and sensual complexes.

In 1909, Jung and Freud went to the United States. Gustav delivered a series of lectures there. The international popularity and private practice were pretty beneficial, and the psychologist left the post of the clinical director at the Burghölzli hospital in 1910. Jung came back to his homeland and absorbed himself with myths, legends, and tales in their connection with psychology.

At the same time, Freud and Jung presented the publications that marked the borderline in their professional views on the nature of the unconscious. In 1913, the fathers of psychoanalysis ceased to communicate. The break-up drama brought to life The Red Book and Symbols of Transformation.

In the 1920s, the psychiatrist had several exciting journeys to Africa and North America. The cultural and psychological essay became a part of the autobiography Memories, Dreams, Reflections. In 1933, the man gained the title of the Honorary President of General Medical Society for Psychotherapy and presented his new book, Modern Man in Search of a Soul. Two years later, the city council of Zürich awarded Jung the literature prize and 8000 CHF.

In 1933-1942, Gustav taught in Zürich; in 1944, he began to deliver lectures in Basel. In 1933-1939, the scientist was publishing a magazine supporting the Nazi’s politics and ethnic cleansing; extracts from Mein Kampf always accompanied the materials. At this period, Jung created The Archetypes and the Collective Unconscious and Psychology and Religion.

In February 1944, Jung had his leg broken during an excursion. He was hospitalized and had a heart attack soon; he was on the edge between life and death. Later, the psychologist described his visions in the autobiography.

In November 1955, Jung’s wife Emma died; they had lived together for more than 52 years. This tragedy devastated Carl, and he threw himself to work to distract himself from bitter thoughts. Jung was creating his autobiography with a secretary’s assistance, and it was time-consuming. He received so much correspondence that had to take packs of letters behind bookshelves.

21-year-old Jung met his future wife, Emma Marie Rauschenbach, when he was a student. Emma was only 15; Gustav immediately liked the modest girl with thick plaits. The couple married on February 14, 1903.

The woman came from an old Swiss and German family; her ancestors were wealthy industrialists. Thanks to his wife’s fortune, Jung could forget about bringing home the bacon and concentrated on psychological research. Emma was genuinely interested in her husband’s work and supported him in everything. They had four daughters (Agathe, Gret, Helene, and Marianne) and a son (Franz).

In 1909, 21-year-old Toni Wolff became Carl’s patient. When she recovered, the woman became the psychiatrist’s assistant and lover. In September 1911, Toni even accompanied Jung’s family at the Weimar Congress. Although Emma was aware of her husband’s affair, the endless love for the father of her children prevented her from the divorce.

Toni Wolff was the only assistant of Jung and shared the bed and work seat with the psychiatrist for 40 years. They presented their collaboration book Libido, Its Metamorphosis and Symbols.

In May 1961, Jung went for a walk and had another heart attack resulting in brain embolism and partial limb paralysis. Carl was balancing between life and death for a fortnight. According to the nurse who was taking care of him at that period, the philosopher had a dream the day before his death; he woke up and said he was no more afraid, smiling.

Jung died on June 6, 1961, in his house in the Küsnacht village. The famous psychotherapist was buried at a local protestant cemetery. Apart from the man’s initials, one could see the names of his parents, sister Gertrud, and the wife Emma.

“The meeting of two personalities is like the contact of two chemical substances: if there is any reaction, both are transformed”.

“It is a fact that cannot be denied: the wickedness of others becomes our own wickedness because it kindles something evil in our own hearts”.

“Every form of addiction is bad, no matter whether the narcotic be alcohol or morphine or idealism”.

“I am not what happened to me, I am what I choose to become”.