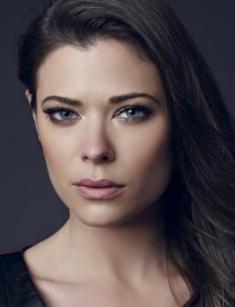 Peyton List makes her career all her life. She did not gain world fame and participation in multi-million blockbusters but she has an army of loyal fans, who watch the filmography and new projects of the spectacular brunette.

The American actress was born on August 8, 1986, in Boston and grew up in the largest city in Maryland, Baltimore. The girl grew up artistic, active. Perhaps that is why List has not only movies and television projects but also modeling and severe ballet training in her creative biography.

For example, the 8-year-old girl had the idea to go to the casting in an advertising agency to get a place in a video about toys or sweets. The plan was implemented but not completely. She did not sell Barbie and cakes and macaroni but the cheese of famous brand Kraft Foods Inc.

She decided not to stop there. Her photos often appeared on the covers of children's and later youth magazines and editions for teenagers. However, there was not only one ambitious girl in her family. Peyton's elder sister, Brittany, was passionate about her modeling career and moved to New York at the same time.

She followed a sister to conquer the catwalks when the girl was 12 years old. Her height of 5,5 feet (1.70 m) was suitable for a career of the model and her attractive appearance made her an ideal candidate.

In the summer of 1998, she was engaged in the acting agency and she studied at the School of American Ballet at the same time. She was able to have impressive achievements in choreographic art. She even performed in the famous production "The Nutcracker" but she was more interested in the movie industry. In 2000, Peyton starred in an episode of one of the best series Sex and the City and the ballet was in the background but the fashion industry remained the priority for her like in adulthood.

The performer was invited to star in one of the longest shows in USA, As the World Turns, after her fateful appearance in Sex and the City. The first series was released in 1956 but the viewers continue to watch this series to date. List starred in this series for four years and was nominated for the prestigious Soap Opera Digest Awards.

Then she got small roles in several successful projects: CSI: Crime Scene Investigation, One Tree Hill, Ghost Whisperer, Monk. Her most extensive work was in the comedy Männerherzen, where she played in 11 episodes.

In 2010, the actress had success. She could be seen in the series Smallville. She starred in the first (and only) season of the fantastic detective story FlashForward, which was released in the USA, Canada, Russia and Kazakhstan.

She starred successfully in the series 90210, which became a continuation of the cult saga of the life of teenagers of the 1990s. Her filmography was implemented with her participation in such projects as The Flash and Blood and Oil, which was aired on ABC.

The performer appeared in several episodes of Mad Men for five years. She won the Emmy Award. She played one of the main characters, Cara Coburn, in the series The Tomorrow People but the show was officially closed because of poor ratings a year after the release of the series. Besides, she starred in the thriller Frequency for less than a year. The old friend of Peyton, Riley Smith, took part in the filming of a police drama with elements of science fiction.

In 2018, she was involved in the filming of the movie Gotham. The viewers have been interested in the story about the young years of Batman`s life since 2014, that is why the project can be called stable. One of the partners of the actress, who played the character of Ivy Pepper (Poison Ivy), was Cameron Monaghan. The actor, who is known for his roles in such series as Rizzoli & Isles, Shameless, he got the central role of Joker in the series Shameless.

Besides, Peyton has several projects for the full screen. You can see her in the biographical sports drama The Greatest Game Ever Played, which is dedicated to the life of the golfer Francis Ouimet, the horror movies Shuttle and Meeting Evil and the thriller Deep Winter.

Peyton prefers to ignore issues, which are related to her own life. She is included in the list of the closed persons of the American television industry. She does not try to take pictures in a swimsuit. She has her page on "Instagram" but she rarely updates the content. She does not report about each day, starting with the morning selfie without makeup, unlike her colleagues. She does not use her account on Twitter.

She usually appears with her family members or close friends at open shows and awards, premieres. There is no reliable information about her private life. Perhaps she does not have romantic relationships. The star performer has no children. If she is pregnant, her diffidence probably will not allow the tabloids to publish a new number with her picture on the cover and the caption: "Pregnant!".

It is curious that the namesake of the actress, Peyton Roi List is a popular performer too. The girl was born in 1998 but she managed to become more famous. Since 2011, she starred in the popular series Jessie, which broadcast on the Disney Channel. Wikipedia articles start the same way about both actresses List but the girls are very different from each other in appearance as well as the projects they choose. Peyton List has a net worth of $7 million.

Perhaps the only similarity in their filmography is the already mentioned drama As the World Turns. It is hard to believe but she and the other actress managed to be on the set of this drama. The schedule of elder Peyton does not interfere with combining work on TV with other activities. She regularly appears on the covers of magazines and takes part in the advertising of popular brands.