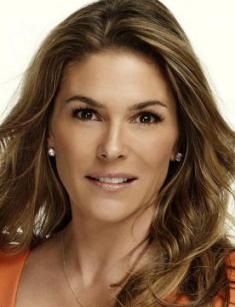 American actress Paige Turco rose to prominence playing fearless journalist April O'Neil in the film about ninja turtles, strong and determined Abigail Griffin in the TV series The 100. Interestingly, the celebrity was not going to connect her life with the cinematography because she dreamed of being a ballet dancer. However, life had other plans, and Paige appeared on the film set, and now her filmography includes several dozen movies.

Jean Paige Turco was born May 17, 1965, in Springfield, Massachusetts, USA. The girl was not even one year old when her father David Vincent Turco died of a cerebral hemorrhage at the age 27. Paige was raised by her mother and grandparents.

Turco was a creative child; she played the flute in a school orchestra, worked on school television, and studied classical ballet. At the age of 13, the girl attended the Amherst Ballet Theater Company, a dance school. She then continued to study classical dance at Walnut Hill School for the Arts.

The girl was sure that her future would be inextricably connected with the ballet. It is not surprising, because she managed to achieve considerable success for a few years. Paige danced in The Nutcracker staged by The Berkshire Ballet, collaborated with America’s largest dance troupes.

However, at the age of 14, due to an ankle injury, she had to put her ballet dance career to an end. Turco admitted that after that, she did not attend ballet performances for a long time because this decision was too painful.

After graduating from college, the future celebrity entered the University of Connecticut, where she majored in drama. She had to combine auditions with a job at a bank (on weekdays) and a clothing store (on weekends). Then she moved to Brooklyn and began an acting career. At first, she joined summer troupes and performed in theaters of the northern states from season to season, but soon there was a change in her career.

In 1987, Turco was cast in the film Bright Lights, Big City. Initially, Joyce Chopra headed the project, but a month after the start of filming she was replaced by James Bridges. The new director wanted the young actress to appear in nude scenes, but Paige was not going to do that. Due to disagreements with Bridges, she had to leave the project.

In July 1987, the young woman received her first prominent role. She played Dinah Marler in the popular TV series Guiding Light. This soap opera is considered the longest-running project in US history; it was broadcast on the radio, then began airing on television. The TV show went through constant cast changes, so Paige was not the first and last performer of this role. From 1986 to 2009 four actresses portrayed Dinah. Turco shot in the project for a little over a year, after which she was fired.

Soon, Paige was invited to play in another series All My Children, in which she got the role of Melanie Cortlandt. The actress confessed in an interview that participating in this soap opera was real salvation after she was fired from Guiding Light.

In October 1990, Turco was cast in the second film about ninja turtles. It was her feature film debut. Moreover, it was not an ordinary role, because, in the first part, another actress Judith Hoag portrayed the character of April O'Neil. According to critics, Paige managed to create an image close to the original character from the comic book.

In 1991, the actress had to say goodbye to the role of Melanie because it was simply impossible to shoot in several projects simultaneously. Turco focused on the role of April O’Neil. Although the second part of the trilogy did not become so popular with viewers as the first one, in 1993, the creators could get back own. Teenage Mutant Ninja Turtles III became the top-grossing film.

Since 2014, Turco has starred in the series The 100. She appeared as the chief physician at the space station Ark. The actress believes that her heroine Abigail is a truly strong woman who makes the story even more exciting.

Paige met actor John Mese on the set of American Gothic. After the series ended, the couple announced their engagement. The lovers appeared together in two more projects. They played in the 1998 film Dark Tides and the 2000 comedy R2PC: Road to Park City. However, in 2001, the actors parted away and broke off the engagement.

Soon Paige met actor Jason O'Mara on the set of the series The Agency. Office romance began after a blow to the eye. In their first scene, the heroes had to fight, and at some point, Turco did not have time to dodge the colleague’s blow.

By way of apology, Jason presented the woman a rubber duck, reminding her that next time she did not forget to duck.

That's how it all started. On September 19, 2003, after nine months of dating, Turco and O'Mara married in Old Saybrook, Connecticut.

She gave birth to a child in February 2004. The couple had a son, David, named after Paige’s father. However, three years later, in 2007, the couple filed for divorce.

In 2018, the thriller Separated at Birth premiered, in which Paige played the leading role. Her heroine, Lucy Pierce, believed that she lived in an ordinary family until she came across an old article about the disappearance of little Victoria. There was a picture of little Lucy in the newspaper. The film by Jean-François Rivard tells the story of a woman who is trying to figure out her past.

There is no reliable information about the personal life of the actress. Now Turco is still attractive; she is 5.41 ft. (165 cm), weighing 110.23 lbs. (50 kg). Fans compare her to Cindy Crawford. By the way, the actress and model are the same age.

Paige Turco has a net worth of $5 million.