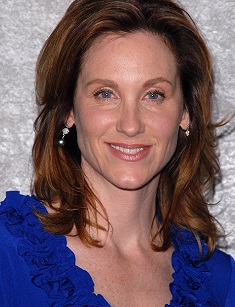 Judith Hoag was born on June 29, 1968, in Newburyport, Massachusetts, the United States. As for her education, young Hoag attended Walnut Hill School, as did Paige Turco. Judith began acting on stage at the age of 13, was invited to star in different commercials.

Judith Hoag started her professional career in 1986. So, that year she appeared as Charlotte 'Lotty' Bates Alden in the ABC daytime soap opera Loving. She worked there for two years, leaving in 1988. Then the actress appeared in primetime television. Hoag started playing a lead role on CBS comedy series Wolf. The series was canceled after a single season. In 1990 fans could see Judith Hoag acting in movies A Matter of Degrees and Cadillac Man.

That time the actress also got the role of April O'Neil in the first Teenage Mutant Ninja Turtles movie (Hoag co-starred there alongside Elias Koteas). The picture was of an immense commercial success – it made near $135 million in North America and over $66 million worldwide. Such a high sells’ level made the movie the ninth highest-grossing film of 1990 worldwide.

Judith Hoag got this movie while she was still shooting Cadillac Man (1990) and had to fly off to North Carolina on the weekends. Everyone wondered what kind of strange movie the actress was off doing. Only Robin Williams had heard of the Ninja Turtles. He had collected all of the comic books and couldn't wait to see the movie. He brought his kids to the premiere and surprised Hoag, as she shared in an interview.

Having stopped working on Teenage Mutant Ninja Turtles, the woman took part in the shooting of various TV movies, including Fine Things by Danielle Steel, and Switched at Birth opposite Bonnie Bedelia.

In her career, the actress also contributed to TV shows, such as Quantum Leap, Melrose Place, Roseanne, The Nanny, Murder, She Wrote, The X-Files, Six Feet Under, Ghost Whisperer, NYPD Blue, Grey's Anatomy, Private Practice, CSI: NY, Criminal Minds (starring alongside Luke Perry), Castle, The Middle, Grimm. There were rumors Hoag would star on TV series Desperate Housewives, but it happened to be a lie.

In 2006 she started playing Cindy Price on the HBO drama series Big Love. Playing on the FX original series Sons of Anarchy the role of the wife of Elliott Oswald, a wealthy and powerful resident of Charming, California, unlike her husband, she is unwilling to consort with the Sons, regardless of the circumstances. She appears only on the episode "Fun Town" in the series' first season.

In 2012, Judith Hoag appeared with a recurring role in the ABC drama series Nashville created by Academy Award winner Callie Khouri. Her character was poised and driven Tandy Hampton, daughter and protégé of Lamar Wyatt. Shortly after, she made a cameo in Teenage Mutant Ninja Turtles: Out of the Shadows, but the episode was not shown on screens.

In 2016, Hoag auditioned for the role on TV series Better Call Saul but failed.

According to the website IMDB.com, Judith Hoag’s net worth is evaluated at $4 million.

Vince Grant and Judith Hoag have been married for 30 years. They were dating for 1 year after getting together in 1987 and were married on July 30, 1988. Vince Grant is a 58-year old American Actor. Born on 11th May, 1961 in Denver, Colorado, USA, he is famous for Taking Lives.

The spouses have created an extended family of two children – a daughter and a son.