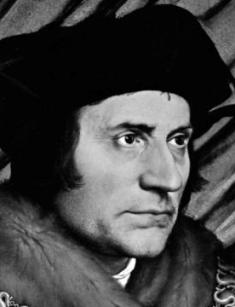 Thomas More is a well-known humanist writer, philosopher, and lawyer from England, who also served as Lord Chancellor of the country. Thomas More's most famous work is Utopia. In this book, he took a fictional island as an example and outlined his vision of the perfect socio-political system.

The philosopher was also an active public figure: he was alien to the era of the reformation, and he stood against the spread of the Protestant faith in English lands. Refusing to recognize Henry VIII as the head of the English Church, he was executed under the act of treason. In the twentieth century, Thomas More was canonized as a Catholic Saint.

The biography of Thomas More begins in the family of the London judge of the High Royal court, Sir John More. Thomas was born on February 7, 1478. His father was known for integrity, honesty, and high moral principles, which largely determined the worldview of his son. The son of the illustrious judge received his primary education at the grammar school of St. Anthony.

At the age of thirteen, More Junior was appointed pageboy to cardinal John Morton, for some time Lord Chancellor of England. Morton liked the jovial, witty, and curious young man. The cardinal declared that Thomas would "become an amazing man."

At the age of 16, Moore enrolled at Oxford University. His teachers were the most exceptional British lawyers of the late fifteenth century: William Grocyn and Thomas Linacre. The young man found studying easy, even though, already at that time, he didn't like to learn laws, but preferred the works of humanists of the time. So, for example, Thomas alone has translated into English the biography and work 900 Theses of the Italian humanist Giovanni Pico Della Mirandola.

Two years after entering Oxford, Thomas More returned to London at the insistence of his father, to improve his knowledge of English law. Thomas was a smart student and, with the help of experienced lawyers of the time, learned all the pitfalls of English law and became a brilliant lawyer. At the same time, he was interested in philosophy, studied the works of the ancient classics (especially – Lucian and Plato), improved Latin and Greek, and continued to write his works, some of which were started while studying at Oxford.

The "guide " to the world of humanists for Thomas More was Desiderius Erasmus, whom the lawyer met at a gala reception at the lord mayor's house. Thanks to his friendship with Erasmus, the aspiring philosopher entered the circle of humanists of his time, as well as the friends' circle of Erasmus. While staying in the house of Thomas More, Erasmus created the satire In Praise of Folly.

Presumably, the period from 1500 to 1504, the young lawyer spent in the London Carthusian monastery. However, he did not want to devote his life to the service of God and remained in the world. Nevertheless, since then, Thomas More did not forget the habits acquired during his life in the monastery: he got up early, prayed a lot, did not forget about any fast, engaged in self-flagellation, and wore sackcloth. This was combined with the desire to serve and help the country.

In the early 1500s, Thomas More taught at the same time with the law practice, and in 1504 he became a member of Parliament for the merchants of London. Working in Parliament, he repeatedly allowed himself to speak openly against the tax fraud in which King Henry VII was involved. Because of this, the lawyer fell out of favor in the higher ranks of power and was forced to give up his political career for a while, returning exclusively to legal work.

At the same time with practicing law, Thomas was trying his hand at literature. When, in 1510, the new ruler of England, Henry VIII, convened a new Parliament, the writer and lawyer again found a place in the highest legislative body of the country. At the same time, More was promoted to assistant city sheriff of London, and five years later (in 1515), he became a member of the delegation of the English Embassy sent to Flanders for negotiations.

Then Thomas began to work on his Utopia:

Utopia was designed for enlightened monarchs and scientists-humanists. It had a significant influence on the development of utopian ideology and mentioned the elimination of private property, equality of consumption, socialized production, etc. At the same time as writing this work, Thomas More was working on another book, the History of Richard III.

King Henry VIII praised the Utopia of the gifted lawyer and in 1517, decided to appoint him as his adviser. So the famous utopian joined the Royal Council, received the status of Royal Secretary, and the opportunity to work on diplomatic missions. In 1521 he began to sit in the highest English judicial institution-the Star Chamber.

At the same time, he received a knighthood, land grants and became an assistant Treasurer. Despite his successful political career, he remained a modest and honest man, whose desire for justice was known throughout England. In 1529, King Henry VIII granted the faithful Councillor the highest office of the state-the position of Lord Chancellor. Thomas More became the first native of the bourgeoisie, who managed to take this post.

More's Utopia, which includes two books, has the highest value among all his works.

The first part of the work is a literary and political pamphlet (a work of artistic and journalistic nature). In it, the author expresses his views on how imperfect the social and political system is. More criticizes the death penalty, ironically ridicules the debauchery and parasitism of the clergy, harshly opposes the enclosure of community people, expresses disagreement with the" bloody " laws on workers. In the same part, Thomas proposes a program of reforms designed to fix things.

The second part presents More's humanistic teachings. The main ideas of this doctrine are as follows: the head of state should be a "wise monarch", private property and exploitation should be replaced by socialized production, labor is obligatory for all and should not be exhausting, money can only be used for trade with other countries (the monopoly of which belongs to the state leadership), the distribution of products should be carried out according to needs. More's philosophy assumed full democracy and equality, despite the presence of a king.

Utopia became the basis for the subsequent development of utopian teachings. In particular, it played a significant role in the formation of the humanistic position of such a famous philosopher as Tommaso Campanella. Another meaningful work of Thomas More was The History of King Richard the Third about the plausibility of which there is still a debate: some researchers consider the book a historical work, others - rather artistic. The utopian philosopher also wrote many translations and works of poetry.

Even before the famous work of Thomas More enriched the Renaissance and before he began to hold high positions in the state, the humanist married seventeen-year-old Jane Colt of Essex. It happened in 1989. She was a quiet and kind girl and soon bore her husband four children: son John and daughters Cecily, Elizabeth, and Margaret.

In 1511, Jane died of a fever. Thomas more, unwilling to leave his children without a mother, soon married a wealthy widow, Alice Middleton, with whom he lived happily until his death. She also had a child from her first marriage.

For Thomas More, quotes from his works were not just fiction – he genuinely believed in all the provisions of his teachings and remained a religious man. Therefore, when Henry VIII wanted to dissolve the marriage with his wife, More insisted that only the Pope could do so. The role of the latter at the time was Clement VII, and he was against the divorce process.

As a result, Henry VIII severed ties with Rome and embarked on the establishment of the Anglican Church in his native country. Anne Boleyn, the king's new spouse, was soon crowned. Thomas More was so outraged by this that he not only resigned as Lord Chancellor but assisted the nun Elizabeth Barton in publicly condemning the king's conduct.

Soon Parliament passed the First Succession Act. All English knights were required to take an oath, recognizing the children of Henry VIII and Anne Boleyn as legitimate and refusing to acknowledge any authority over England except that of the Tudor dynasty. Thomas More refused to take the oath and was imprisoned in the tower. In 1535 he was executed for high treason.

In 1935 he was beatified as a Catholic Saint.