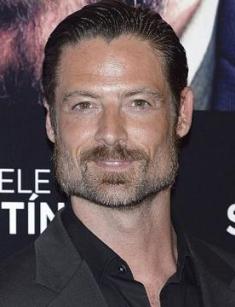 The fifth season of the famous American TV series The 100, launched in April 2018, was marked by the appearance of a new character, Paxton McCreary. In the story, the new hero is a villain and murderer, the head of a criminal group, the antagonist of the title character, Clarke Griffin. William Miller, a Spanish actor of English and American descent, plays such an ambiguous role.

William Thomas Francis Miller was born in Windsor, England, on September 9, 1978. His mother is English; his father is American. For a while, the Miller family lived in the USA, but when the boy was 8 or 9 years old, they moved to Catalonia because the company where William's father worked opened a branch in Barcelona.

Although little William started his primary education in English-speaking countries, he integrated into the new environment perfectly and soon spoke Spanish and Catalan as well as his native English. Later, the young polyglot also learned the French and Asturian languages.

After graduation from high school, the future actor studied history and archeology. He even participated in some excavations in Egypt, as a member of an archaeological expedition. But then he became interested in performing arts and entered the faculty of drama at Rovira i Virgili University in Catalonia. He played in amateur theaters in Barcelona and Tarragona.

Besides, Miller studied in the theater studio of the famous Spanish director, Juan Carlos Corazza.

The young man lost his father early and was raised by a stepfather.

“Perhaps the father would have insisted that I ran business,” the actor suggests.

William Miller began an acting career in 1998 with bit parts in Spanish films and TV shows. He has been shooting almost without career breaks since 2001.

The first serious project in which the young man managed to play was the Spanish series Cuéntame cómo pasó (English: Tell me how it happened). He portrayed Mike for one season (2002-2003), and soon the actor became a rising Spanish TV star. New projects were not long in coming.

“I participated in many TV shows,” William recalls in an interview. – But I played only for one season. I did not choose roles and moved from one project to another. When there was no work, I worked as a waiter. Instability is a part of my life.”

Nowadays, the actor's filmography includes dozens of television series and movies of various genres, from historical dramas to melodramas and comedies. One of the most significant projects that brought the greatest fame is the TV series Isabel, a biographical drama about the life of Queen Isabella of Castile. Miller played the lover of Queen Joan of Portugal, Beltrán de la Cueva. He participated in the project from 2011 to 2013.

Since 2010, the actor has collaborated with American film companies. In 2016, he appeared in two films The Midnight Man and Ruta Madre.

Acquaintance with American directors gave a good result. In 2017 it became known that the Spanish actor with an English surname would play a new character in the popular American TV project The 100. When reporters asked how he managed to get the role, Miller replied:

"I got acquainted with the creators of the TV series when we filmed the pilot episodes for another project which did not become popular. Later, they thought of me. Nobody believes, but I have not even auditioned for it.”

William’s character in The 100 is perhaps one of the cruelest and most cynical heroes in the actor’s career. McCreary has a ruthless character.

In the story, Paxton is a former serial killer who is convicted and cryogenically frozen. In the fifth season, the villain arrives on Earth, where he wakes up and starts a war against the 100.

"I have always liked the roles of bad guys because no one is evil by nature. The actor’s task is to show why this person has become bad,” Miller admits.

The actor does not make his private life public, but he also does not make it secret. The photos of social events always depict him together with an attractive woman.

It is known that for several years, William Miller had a romantic relationship with Spanish actress Maria Cotiello, who is famous in her homeland for the roles in popular television series. The actor even told journalists that he planned to build a family soon.

However, in June 2018, information appeared on the Internet that the leading actor in The 100 had passion for Eliza Taylor. The couple does not officially confirm their relationship. Fans of the series draw conclusions about the relationship of their idols seeing photos that the young woman posts on Instagram. The paparazzi add fuel to the fire, when they take pictures of the couple, walking together.

The actor has long dreamed of playing an artist, and his dream has come true. Not that long ago, Miller played a many-sided, creative personality, Hector Adieta, in the tenth season of the series La que se avecina.

The actor still lives in Spain and, although he has to shoot in America more and more often, William does not want to leave the country that has become his native land.

“I feel more comfortable in Spain than in any other country I have been to,” Miller says. - I have lived in the UK and the USA, but I don’t feel any of these places. The best thing about Spain is its people!”