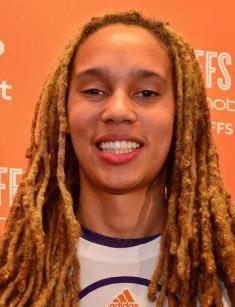 Brittney Griner is a popular Texas-born basketball player from Houston. She was born on the 18th of October, 1990. Brittney is of American nationality and mixed ethnicity. Her religion, which she believes in, is currently not known.

Brittney played for the Phoenix Mercury of the WNBA. By the way, she is the only female player who got 2,000 points and who blocked 500 shots. She is known for having a gold Olympic medal and also a gold medal in the FIBA World Cup. Recently, she has received huge fame worldwide after being arrested in Russia.

Brittney was raised in a well-settled American family from Houston. Her dad, whose name is Raymond Griner, was a sheriff in Harris County. Also, he is a veteran who served in US forces in Vietnam. Brittney's mom, Sandra, is an ordinary housewife. Brittney is not the only child in the family, it is known that she has three siblings.

Brittney spent her entire childhood in Texas, and after graduating from Nimitz High School, she enrolled at Baylor University in Texas.

The Phoenix Mercury selected Griner with the first overall pick in the 2013 WNBA Draft. She immediately made herself known. She made history by being the first WNBA player to slam dunk twice in a single game in her May 2013 professional debut. She blocked a historic 129 shots in 2014, assisting the Mercury in their WNBA championship win over the Chicago Sky. During that same year, Griner also took home the first of his two subsequent Defensive Player of the Year honors.

During the WNBA off-season, Griner competes abroad. She signed a four-month, $600,000 contract to play for the Zhejiang Golden Bulls of the WCBA in China during the 2013–14 offseason, which was 12 times more than the salary she received in her first season with the Mercury. Griner and her colleague Diana Taurasi competed for UMMC Ekaterinburg in Russia during the offseasons of 2014–15 and 2015–16, winning consecutive titles.

On February 17, 2022, Brittney Griner was detained at the Russian Sheremetyevo Airport. The fact is that hashish oil was found in the luggage of the athlete. In Arizona, she has prescribed it for treatment, but in Russia, this is strictly prohibited. Since Brittney violated Russian law, she was taken into custody. On August 4, Brittney was sentenced to 9 years in Russian prison.

Joe Biden, the president of the United States, tried to regulate this issue and exchange Brittney for a Russian prisoner. However, this did not help. Many consider Brittney a political pawn of Russia, and now activists, her family, and the American government are fighting for her rights.

Brittney Griner is a lesbian. In 2014, Brittney decided to marry another female WNBA player, Glory Johnson. In 2015, they were both arrested in Phoenix because of a fight between them. But then, some months later, despite the fact of their domestic violence, Brittney and Glory got married. With the help of in vitro fertilization, the couple had twins. This happened in October 2015 with the help of in vitro fertilization. However, then Brittney decided to annul the prenuptial agreement but was refused. As a result, in 2016, they both divorced, and Brittney was ordered to pay alimony to her ex-wife.

Her current wife is Cherelle Watson.

In 2013, Brittney won the ESPY Award for being the best sportsman in college. Throughout her basketball career, she won such awards as the Honda Sports Awards and the Honda Broderick Cup. She was also on the cover of ESPN's Rise and was the best high school basketball player in the US according to Rivals.com.