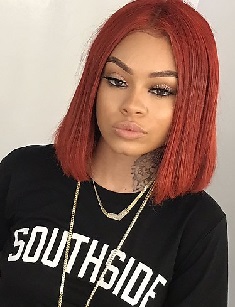 The young rapper proves to be a multitalented personality, as she is successful in different spheres – music, business, blogging, and writing. Thanks to her bright personality and talents, she rose to prominence and has a promising future. Today she has a reputation as a voice of youth and significant social standing.

People say that every gifted person knows his talents, and this girl proves it. Alyssa was sure that she would be a star and have a bright, successful career. The exuberant and enthusiastic kid was always doing something. Her entrepreneurial skills, inherited from her father, Alyssa realized selling candy at school. She also used to participate at drag races.

At the age of 10, the rapper started writing her first songs. Alyssa is not the only child in her family; the rapper has two sisters. As to education, the girl was an early career starter and wasn't much interested in school life. The rapper graduated from High School and haven't proceeded her education.

She is a real early-career starter, as her budding career started when she studied at school. Alyssa took part in a reality show, known "The Rap Game." As a young rhymer, she did her best and won the first season of the reality series. That time her fame spread like wildfire.

This TV series was some boot camp for up-coming rappers. The producer of the show, Jeremy Dupri, ran them through writing music, freestyling, doing video and performing live. That time Miss Mulatto convinced her father to become her manager.

Miss Mulatto become a star right on the border of her childhood and adulthood. But as the rapper confesses her life wasn't pretty tough, she said that

"It's fun being young in the adult industry!"

Being a part of a project, she was involved in scandals with her opponents. Thus, she had a feud with Supa Peach. Miss Mulatto vs. Supa peach fight got thousands of views on social networks. But their dispute has not come to an end after finishing the reality show. Supa Peach went live after the Trap Festival 2019 and told about how her dad and brothers beat up Mulatto's dad and security.

Disses of Miss Mulatto vs. young lyric also got much popularity on Youtube.

The birth of the big MC connected with Jermaine Dupri, he produced the promising rapper after the ending of the show.Dupri recognized the young rapper's talent:

"it's just a thing, a thing that I think southern rappers, especially Atlanta rappers, have that is a quality of music right now that people are really focused on, people are trying to sound like. So, she has that background; she comes from where all of the dirtiness is coming from right now. She's a beautiful girl. It's a bunch of things that work that helps her be the thing for this right now."

The rapper on the reality TV series

As Miss Mulatto says, she got much inspiration and experience working under Dupri's guidance. The most important thing which she learned is hard work. The collaboration of the young artist and experienced producer lead to several singles, "No more talking" among them. That time the rapper featured on the radio and became a character of children's book. However, she turns down the deal with Jeremy Dupri, and she is not signed to So So Def any more.

The rapper collaborated with Bandit Gang Marcos. Being a couple, they recorded several songs such as Same Road, Hurt and In my feelings lyrics of which are very romantic. She has a minor appearance in the reality television series Love and Hip-hop.

She also got success as a starting businesswoman; Miss Mulatto opened a clothing boutique store when she was 17. She has a bunch of followers in social media what makes her a successful blogger too.

Today Miss Mulatto is one of the notable figures in the hip-hop industry. She attracts people's attention to her lyrics. The artist became a female lyricist, whose record of songs becomes a lengthy intellectual process.

"I like to write, 'cause I don't like just to go in there and say it. I can go in there and just say whatever comes to my mind, but it's not gonna be no metaphors and punchlines, you know what I'm saying? It's just gonna be, "Cat in the hat on a mat in the pat." I don't like to rap like that, like a lot of people. I want to put thought process into my rap, so it usually go like that: me pulling up the beat, writing in my notes, or actually physically writing it".

She is not married and hasn't kids. Miss Mulatto has dated with her recording artist Bandit Gang Marcos. But today she hasn't a boyfriend. Miss Mulatto is active on social networks. Thus, she has more than two million followers on Instagram. She has a voluptuous figure, frequently changed her hair color. For her short career he earned a healthy amount of wealth, her net worth is about $500,000.