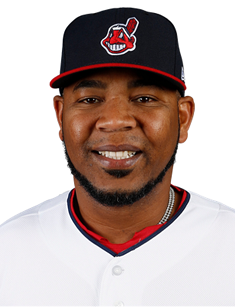 Encarnación represented the national team of the Dominican Republic. He is the WBC champion of 2013. Edwin plays at a third and first baseman, and designated hitter. His net worth is estimated to be roughly $14 million.

The birthplace of Edwin is La Romana, the seventh largest city in the Dominican Republic. His parents, Mireya and Elpidio, welcomed him on January 7, 1983. He became the third son in the family. Also, he had a sister. Elpidio was a track-and-field coach, former athlete, a national track champion and worked in the college in Puerto Rico. He wanted his sons continued his occupation.

Edwin was brought up in a city, surrounded by the cane fields, where the cutters, Haitian immigrants from the other half of that culturally complicated island, lived in squalid bateyes and spent their days in stifling heat hacking down the thick stalks by hand with machetes, earning two dollars a tonne.

As a kid, Edwin started to earn his first money by stealing mangoes from the trees and selling them. He and his brothers Richard and Julio liked to play vitilla, the game based on baseball. They took long sticks, and their ball was a cap. They ran it like a Frisbee. Children didn’t hope to achieve men’s baseball if they couldn’t play vitilla.

The only local company built or owned almost everything in La Romana — the airport, the ship port, the local baseball team, the massive and luxurious golf resort. The same company owned the best patchy grass outfield and rocky, rutted infield, located nearby the mill. It was the absolute best place in town for local kids, where they learned to play baseball.

Edwin lived a 10-minute walk from the field. At the age of 10, he joined the Oscar Rivera organization. The coach taught Edwin the basics of baseball. Coming for the first time to Oliver’s practice, Edwin did not know how to play and even how to catch and hit the ball. Edwin was timid and spoke rather bad. He was short and weak, but he always focused on what he was doing. That ability helped Edwin to join Oliver’s team through hard training.

He practiced on weekdays and played games on the weekend. When Edwin was 13 years old, he made his first home run on that sandlot. His team was the best in La Romana. Edwin became the biggest, strongest, and best player in the city. He was training at nights on a batting cage, made by his father.

Encarnación started his career in Caguas, playing for high school’s team. Later he was selected to the Dominican amateur league. He got into the MLB very unusual. In 2000, the Texas Rangers drafted him as a Dominican amateur player. Edwin got the 274th number in the draft. One year later, Rangers sold him to the Cincinnati Reds.

Edwin didn’t play for Reds until 2005 when he made his debut appearance. It was a great event for every citizen of his native La Romana. Two next seasons he participated in 186 games, become the best player of the week in 2006. His stats by month were rather good. But in 2007 he was on the bench, giving way to a newcomer.

The head coach benched Edwin after he failed to run out a pop fly in April 2007. A month later he was demoted to Triple-A team. It was a good push for him, and in 2008 Encarnación made his career-high result. However, a push was good but didn’t bring serious improvements in Edwin’s type of gaming. He spent 2009 season on the bench, showing rather low stats. All mentioned led to his trade to Toronto.

Encarnación signed a contract with Blue Jays on July 31, 2009. It was supposed that Blue Jays didn’t want to take Edwin, but Reds refused an exchange deal without including Encarnación in it. Edwin took part in 42 matches in his debut season. In 2010 he missed the third of the year because he was injured and he suffered burns on his forehead and face.

After the return, he repeated the Reds’ experience and was optioned to Triple-A team. Showing outstanding game in the minor league, he was invited to Blue Jays again. Bautista played a big role in getting Encarnación through that rough patch. Later Encarnación and Jose Bautista became one of the best duets of the league.

Then Bautista said: “Edwin is one of the guys that I’ve become closest to in the game. I was just trying to help him like a brother would. I’m glad it worked out. He never gave up, and he finally got a chance to relax and just go out there and play—kind of like I did. Now he’s put up the numbers to prove what he’s capable of.”

Encarnación signed a new contract with Jays. His right-handed bat became the strongest remedy in the games vs lefties. In 2013 Edwin was selected Dominican Republic national baseball team at the 2013 World Baseball Classic, where he joined another MLB player Nelson Cruz. They won gold medals that year. Later Encarnación many times played vs Nelson Cruz, vs CC Sabathia and others. Edwin stayed in Jays till 2016 before joining Cleveland Indians in January 2017.

Encarnación signed a three-year contract with Cleveland Indians. They craved right-handed power, and Edwin Encarnación offered that in surplus. Standing in front of his new locker at Progressive Field, he donned a white Indians jersey, pulled on a Cleveland cap, smiled wide and raised both arms in celebration. Later his friend Josh Donaldson joined Encarnación.

Edwin’s deal with the Indians was worth $60 million in guaranteed salary, which included a $5 million signing bonus and an annual average salary of $20 million. Encarnación played for Indians only two years. In 2018 he was ranked 3rd in RBI and T9th in home runs. In December 2018, his trade to Seattle Mariners succeeded.

Seattle Mariners Executive Vice President Jerry Dipoto announced on December 13, 2018, that the first baseman/designated hitter Edwin Encarnación and a compensatory Round B draft pick were traded to Mariners from the Cleveland Indians in exchange for the first baseman Carlos Santana.

Edwin was 35 years old then and spent 65 games. In April he broke open the scoring in Indians-Angels game with danged inside the park home run. It happened because Justin Upton forgot to baseball in the middle of a play. Also, anyone can see the batter vs. pitcher matchup for Seattle Mariners designated hitter Edwin Encarnación on ESPN.com.

In June 2019 Encarnación was traded from the Mariners to the Yankees in a move that only cost the Bronx Bombers a low-level prospect and some cash. Encarnación announced it was his last contract. At the same time, Athletics signed Brett Anderson. The Yankees acquired Edwin for his right-handed bat, but he showed some agility at first base in a 4-1 win over the Astros, making a pair of diving plays.

With a runner on second and one out in the third, Encarnación got to Michael Brantley’s grounder, and James Paxton got to the bag in time to get them out, while colliding with Brantley. After a walk to Jose Altuve later in the inning, Encarnación made another outstanding play to his right to get Yordan Alvarez to end the third and keep the game scoreless.

At present Edwin has a net worth of ‎$14 million.

Edwin Encarnación’s wife Jennifer Pena is the hot fitness competitor and model. Her father is Tony Pena, the catcher who seemingly played a billion years in the MLB. He played for the Red Sox. In February 2018, Jennifer said yes to Edwin’s marriage proposal. He signed a huge deal with Cleveland shortly before the proposal. His wife gave birth to a child after the marriage, and the name of Edwin’s son is Edwin Junior Encarnación.

Players change walk-up songs regularly. However, just like wearing the same pair of socks for every game or wearing a hat in a certain way, the walk-up song can be part of a superstition ritual that may serve to bolster the player’s self-confidence. The Edwin’s walk up song 2018 was “Como Yo Le Doy” by Pitbull featuring Don Miguelo.

By 2018, Encarnación led all MLB hitters with 231 HR and 657 RBI in six previous seasons. He will have to be taken seriously as a Hall of Fame candidate if he spend 2-3 seasons on the same level. Currently, his Hall of Fame odds — 30%, thanks following records: