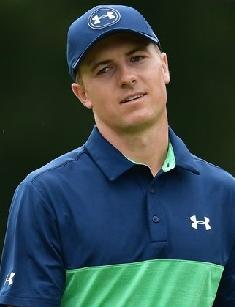 Jordan Alexander Spieth is an American professional golfer. He is one of the brightest young stars in world golf, being former world number one in the Official World Golf Ranking, a three-time major golf championships winner and the 2015 FedEx Cup champion.

Jordan Spieth was born in Dallas, Texas, the U.S. His father, Shawn Spieth, is a former college baseball player. He is also a founder of media analytics startup. His mother's name is Mary Christine Spieth. After being a college basketball player, she turned out to be a computer engineer.

His grandfather, Donald Spieth, is a music teacher at Moravian College and Northampton Community College in Bethlehem, Pennsylvania. He is known to be a long-time conductor of the former Lehigh Valley Chamber Orchestra.

Jordan has two younger siblings, Steven and Ellie. Ellie has grown up with disabilities.

Spieth was educated at St. Monica Catholic School and graduated from Jesuit College Preparatory School in 2011. He learned to play golf at Brookhaven Country Club.

There is no doubt that Spieth inherited his parents' athletic capabilities. As a kid, he was interested in soccer, baseball, football, basketball and golf. Eventually, golf became a priority.

At the age of nine, the budding champion began practicing his golf skills in the family lawn. He wanted to show a great desire to join the Brookhaven Country Club as it could give him access to train professionally. When Spieth was 12 years old, he started training with former golf pro Cameron McCormick.

The sports career of Jordan Spieth started in 2013. In January he competed in his first tournament the Farmers Insurance Open which took place at Torrey Pines. In March Jordan showed good results and finished second at the Puerto Rico Open. He was among the best golf players at the Tampa Bay Championship.

On July 14, 2013, Spieth became the winner of the John Deere Classic, which was his first professional tournament. After the victory over champions Zach Johnson and David Hearn, he became the fourth youngest PGA Tour winner.

The same year, Spieth played the Wyndham Championship, where he lost to Patrick Reed. The 2013 season was very fortunate for the player, as he entered the top ten in the FedEx Cup and was called the youngest to play in the Presidents Cup.

In April, 2014, Spieth debuted at the Masters and was named the youngest runner-up in Masters history. For the first time in his career he was included in the top ten in the world rankings. The same year, he was the youngest American to play in the Ryder Cup in 85 years.

In 2015, he became the winner of the Valspar Championship. In March, he was second at the Valero Texas Open. On April 9, the sportsman was lucky to win his first big victory at the Masters Tournament at Augusta, Georgia. Again. Spieth was the second-youngest person to win the competition. Having shown a stunning result, the player was in the 2nd position in world rankings.

The series of matches at U.S. Open was on his schedule after Masters. He finished the championship with a victory and became the youngest to win the event since Bobby Jones in 1923. Later that year, Spieth was called the world number one golfer, after winning the John Deere Classic, taking 4th place in The Open Championship and 2nd place in the PGA Championship. His major awards for the season included: PGA Player of the Year, Vardon Trophy and Byron Nelson Award.

The 2016 season was marked by a victory at the Hyundai Tournament of Champions. Unfortunately, Spieth was off course and experienced the biggest failures in his Masters' history. He took the second position at the end of the tournament, but improved his results in May 2016, winning the Dean & DeLuca Invitational and Emirates Australian Open on the PGA Tour of Australasia.

In 2017, the player appeared as defending champion at the SBS Tournament of Champions. It was a solid start of the year, as he finished in third at the Sony Open in Hawaii and entered the top ten at the Waste Management Phoenix Open.

In 2017, he also won the AT&T Pebble Beach Pro-Am and the Travelers Championship. However, he could not participate in the tournament at Bay Hill because World Golf Championships were set two weeks before and the week after Bay Hill.

In February 2018, Spieth participated in the 16-member PGA Tour's Chairman of the Player Advisory Council. It was a three-year term starting in 2019. However, in comparison with past results on the field, he was able to take only the 3rd position at the Houston Open and at the Masters.

In spring, 2019, the golfer returned to Texas, along with one of the most venerable venues in Colonial Country Club.

Jordan Spieth has a unique technique of playing. For many players a golf star is an example to improve their skills. Spieth is famous for his perfect swing mechanics breakdown. With the help of the swing analysis, it is possible to learn about Spieth's main specialties on the practice range. The instruction of his technique includes the descriptions of such positions as: set up down the line, takeaway, backswing, halfway downswing and impact position.

An interesting fact is that at impact Spieth is a little different than most top players: he’s shifted his weight to the lead leg and rolls on his ankle. This position is not ideal for other players but it works for him.

After earning a spot on the 2013 Presidents Cup team, Spieth opened the Jordan Spieth Family Foundation. His younger sister Ellie has grown up with disabilities. She inspired him to make donations to community organizations. The sportsman financially assists children with special needs, military families and childhood cancer. He also provides support to junior golf.

On January 2, 2018, Spieth confirmed his engagement to long-time girlfriend, Annie Verret. The couple started dating during their senior year in high school, although they knew each other before then. While distance seemed to be a barrier in their relationship, the two beat the odds and reunited again. They married in November, 2018, in Dallas.

Most people who find themselves in Verret’s shoes will take the opportunity to gain media popularity but she is one of the few who cherishes privacy and keeps off the spotlight. Her social media accounts, Facebook, Instagram, and Twitter, are strictly private with less than 100 followers.

Jordan Spieth is a Christian who attends the PGA Bible Study.

Very seldom one can see Spieth with no hat. As well as many other athletes and golf players wearing caps, Spieth began to go bald. It is quite common among sportsmen because wearing a cap for many hours can't be good for hair.

Spieth's interests include basketball, spending time on the beach and fishing.

He has several endorsement deals. In January 2013, sportswear company Under Armour made Spieth the face of the company's fledgling golf wing. Then, in January 2015, Under Armour offered Spieth a new 10-year contract.