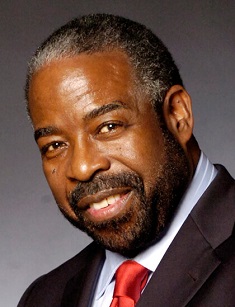 Les Brown is a former American politician, television host, and radio DJ. Besides, he is one of the most popular and greatest motivational speakers worldwide. He performs with speeches about almost every aspect of life and helps other people reach success in business, career, love, sport, hobby, etc. His quotes are very popular nowadays in Social Networks. In his show entitled 'The Les Brown Show,' the orator taught people not to give up when it comes to their dreams.

So, Les Brown can teach us a lot. Let's learn!

Les Brown (original name is Leslie Calvin Brown) was born on February 17, 1945, in Liberty City, Miami. He has a twin brother Wesley. The two were conceived by an extra marital affair of their biological mother. The woman gave birth secretly and put her children for adaption. They were only 6 weeks old when a 38-year-old generous spinster, Mamie Brown who worked in a coffee shop, adopted the boys.

Les Brown studied at formal school. When he was in the 5th grade, his teachers thought him to be weak in the head cause he had always been left behind. Little Brown believed his teachers' words and called himself a slow student. However, his adoptive mother didn't agree with him. She tried to develop his potential, to encourage him. Having graduated from high school, he never stopped learning and continued to educate himself.

To earn a living, Les Brown found a job – he was hired as a sanitation worker. Later he turned towards radio broadcasting. There he learned what was required to fit the job of a radio jockey. Once he was lucky to try out working at the junction cause their jockey was not able to come to work. So, Les Brown showed his talent and was hired as a permanent RJ.

Having worked many years at the radio junction, Les Brown decided to move to Ohio. He wanted to find a better perspective. Eventually, he managed to get a job of the junction's manager. While working, Brown started spreading political awareness and was mixed up with controversies and scandals. As a result, he was fired from the radio junction.

Besides, there he got acquainted with Mike Williams, the station's news junction director, who inspired him for applying for a seat in the Ohio State Legislature of the 29th House District. He succeeded to win the elections and spent there three terms. Later Brown was designated as the chairman for Human Resources Committee. Unfortunately, that time, his mother got sick, and Brown had to deny from the position. Notwithstanding, Brown still continued spreading awareness and founded a youth career training program. So, gradually he got the reputation of a motivational speaker.

He started writing the top book 'Live Your Dreams.' As soon as it was published, it became a real bestseller. It tells people how to set goals and reach them. In the middle of the 1980's he moved to Detroit and rented an office with an attorney. He burnt the midnight oil and worked continuously often sleeping on his bare office floor.

In 1990 Brown made motivational speeches for Public Broadcasting Service –TV. Also, his performances were organized for prisoners and children with special needs.

In his admissions, Les Brown said he decided to choose this occupation in order to give back to society the support which he received from his family in hard times.

In 1993 fans could watch Brown's own show named The Les Brown Show. The project caused some arguments because of Brown's strong beliefs and was replaced by another show titled Rolonda.

Brown collaborated with John C. Maxwell and The John Maxwell Team for a candid look into the lives of professional speakers called The Good, The Bad, and The Ugly.

Nowadays Les Brown performs with speeches at seminars, workshops and other events. So, in 2017 he performed with Eric Thomas in Las Vegas with the speeches 'Step Into Your Greatness' and '10 Rules For Success. ' He also has a YouTube channel where he publishes motivational videos.

Les Brown’s net worth is evaluated at $10 million.

In 1995 Les Brown tied the knot with the popular American singer, songwriter and actress, Gladys Maria Knight also known as 'Empress of Soul. ' However, their love and marriage ended in 1997 – the spouses filed for divorce.

In 1989, Les Brown got his first award at the National Speakers Association. He won the Council Peers Award of Excellence of CPAE. Remarkably, he is the first African-American who has received the award.

Besides, Brown was honored with the prominent Golden Gavel Award at the National Speakers Association for his impactful leadership and wise speeches.

In 1991, Les Brown was included in the list Top Five Outstanding Speakers of all time worldwide by Toastmasters International.