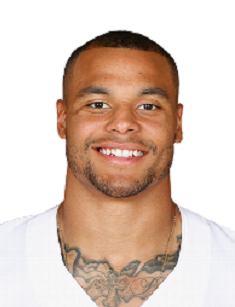 In 2019 the celebrity became a subject of people’s discussions for two main reasons: scoring his first playoff victory and appearing the rumors that he has a girlfriend. Are you ready to get acquainted with the sportsman and know all the details of the news? It’s high time you read the article!

Dak Prescott’s birthplace is Louisiana. He was raised by a single mother named Peggy alongside a brother and a sister. She worked several jobs to feed the family – one of her occupations was a shop assistant. The woman passed away in 2013 because of cancer.

Dak began playing football at an early age. Besides, he also was interested in baseball but played it as an amateur. While studying at a school, Prescott was a real star of its students’ team. In his last year at the school, Prescott registered 2903 yards and made 40 touchdowns. Moreover, due to his skills, the squad advanced to the District Competition.

In 2011 the sportsman entered a college to study management. In his first year, Prescott took part in 13 matches, completed 19 of 30 passed for 200 yards. Besides, he registered five touchdowns in sum.

In the season 2013, Dak appeared in 12 fights, completed 160 of 270 passes and made 14 touchdowns. As a result, he was included in the list of best college players.

The following year, he helped the squad make an 11-3 record – the best one in the whole team’s history. While at university, Prescott established several records.

In 2016 he took part in the Draft and was selected by the Dallas Cowboys alongside Ezekiel Elliott. Eventually, they concluded a 5-year contract. In his first professional match, Prescott faced the New York Giants (David Carr performed for them that time). Although the player made 228 passing yards, his squad was defeated with a 21-20 score. Their next opposer was the team Washington Redskins – Dak Prescott registered 289 passing yards and led the Cowboys to a 28-27 victory. Having faced the Chicago Bears later, Prescott made his debut touchdown and supplied the cowboys with a 32-18 victory. The following week, performing against the San Francisco 49ers, the player recorded three touchdowns and 251 yards and brought his team a 25-18 victory.

Totally, in his first year with the franchise, Prescott took part in all the 17 games being a starter. He recorded 3,703 passing yards and registered 30 touchdowns.

As for team’s results, the Cowboys closed the season with a 14-4 record.

The season 2018 got started with 270 passing yards and two touchdowns – Prescott performed against the New York Giants helping his franchise defeat the opposer.

The following week, Prescott defended his squad fighting against the Green Bay Packers. In sum, he scored four touchdowns and two interceptions, but the Cowboys lost.

The following two matches were not successful for both the player and his team. So, in the fight against the Oakland Raiders (led by Antonio Brown), the Cowboys were defeated 28-8, and Prescott showed low stats. Later, the match against the Philadelphia Eagles was marked with Cowboys’ 38-8 loss. The last game with the Philadelphia Eagles, though, brought the Cowboys the 7-1 victory. Prescott’s passing yards during the game were evaluated at 180 ones. By the end of the year, Dak had scored 3401 passing yards, 18 passing touchdowns, and 14 interceptions.

Cowboys’ first opposer in the year 2018 was the team Carolina Panthers which defeated them with a 17-6 score. Cowboys’ debut season win was in the match with the New York Giants – then Prescott registered 159 passing yards.

Having advanced to the playoffs, the team defeated the Seattle Seahawks. Nowadays Prescott is thinking of becoming an agent.

Dak Prescott’s net worth is evaluated at $10 million. As for his current salary, the sportsman will earn $2 million this year. Apart from annual salary, Prescott gets money for signing endorsement deals. For example, he has partnered with the brand Adidas.

As for Dak Prescott’s private life, there are rumors he is romantically involved with Estrella Nouri. Although the two have not officially announced their relationship, publicity fiercely believes there is an affair between them. Moreover, some people even suppose Estrella will become his wife soon. Fans try to find the confirmation of the news on Prescott’s Social Media – however, he is not that type of person who would show off his girlfriend posting pictures on Instagram. However, Nouri is the other thing - in November 2018 she posted a picture featuring her standing on the football field. It was a Cowboys game – and the photo evoked gossips in a twinkle.

Dak Prescott and his deceased mother were very close. From the very infancy, Dak had always trusted his mom, referred to her to get support and love. When she passed away because of the disease, it became a real tragedy for Prescott. He didn’t appear in public for near three weeks after her death, trying to accept the loss.

In his admissions, the celebrity shared recollections of his childhood when his family had financial problems – Prescott’s dad abandoned them and his mom was the only person to bring the kids. However, the woman didn’t give up and succeeded to raise decent people. Looking up to his mom, Dak learned to be strong and not to be afraid in front of life ordeals.