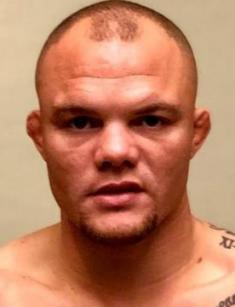 The American athlete Anthony Smith has been performing in MMA since 2008; the audience knows him as Lionheart. Smith has had many successful matches in UFC, Strikeforce, Bellator, and other organizations.

The would-be sportsman was born in Corpus Christi, Texas, in the mid-summer of 1988. There is little information about Anthony’s early years. He grew up fatherless; the mother and grandfather brought up the boy.

Smith was not an obedient child and did not like studies much: daily school classes were challenging for him. Thus, the young man left the high school and got hired as a concrete finisher. At the same period, Smith took an interest in sports and regularly practiced mixed martial arts. Coaches noticed his potential and tried to prepare the athlete for competitions in the best possible way. The endeavor did not go in vain: Anthony’s success in amateurish contests was remarkable, and he decided to try himself in the professional sports soon.

The first professional MMA fight took place in 2008. Smith participated in VFC 22: Ascension in Sioux City, Iowa, and faced Dave Moran. The second round gave Anthony the victory by the armbar submission. The next month, the American celebrated the second victory: he met with Jeremy Shepherd and won by choke.

Initially, the athlete worked for small promotions. While the start was advantageous (three victories in a row), the further performance was less successful: six out of eleven matches ended with failures. Smith defeated Ricky Duvall, Rico Washington Sr, and Chuck Parmelee who had surpassed him before with his punches. Charley Lynch knocked out Anthony in the first round. On February 20, 2009, the sportsman gave in to Brian Monahan and then lost to Chaun Sims, Mike Pitz, and Jake Hecht.

These failures let Smith analyze his weaknesses and improve his technique. In April 2010, he faced Mike George and knocked him out at the 22nd second of the first round. In May, the next opponent, Lucas St. Claire, submitted three minutes after the beginning of the fight. Anthony successfully defeated Logan Clark in June, but Jesse Forbes triumphed over him at the Crowbar MMA: Fall Brawl.

The bad luck did not discourage Anthony: he pulled himself together and gained the upper hand five times in a row: he defeated Ben Crowder, Demetrius Richards, Eric Schambari, and Curtis Johnson by his punches, and Matt Gabel gave in at the second minute of the first round.

With seven losses and 13 victories, Smith took the attention of the popular American promotion Strikeforce and was offered a contract. The debut in the new organization took place in summer 2011. The fight against Ben Lagman finished with Anthony’s victory. However, Adlan Amagov knocked the athlete down in the next fight.

The next three victories rehabilitated the sportsman among fans; three failures followed right away. One of these three matches was held in 2013, when Strikeforce merged with UFC, and many strong athletes joined the new organization. Smith was not an exception.

As long as the man lost to Antônio Braga Neto, he left UFC and participated in Bellator two times and won. He did not sign an agreement with the company, though. Later on, Anthony joined only minor organizations and became the CFFC Middleweight Champion and VFC Middleweight Champion. In 2016, he decided to return to UFC.

Smith lost three out of ten fights; Cezar Ferreira and Thiago Santos managed to surpass him. There were several memorable victories; one of them took place in September 2017 against Hector Lombard. Anthony knocked down his opponent only in the middle of the third round.

Another significant meeting dates back to October 2018: the Swiss Volkan Oezdemir stood against Smith. Although the competition was challenging, Anthony used a choke in the last seconds of the third round. The fight was spectacular and earned the Performance of the Night title.

The athlete avoids talks about his personal life, but there are several pictures on Instagram that give some ideas about the man’s relationship. He seems to have a wife or a common-union partner; the couple has three daughters.

Apart from family photos, the sportsman posts the pictures from competitions and practice. Anthony loves his job and spends all his time in the ring. Fans emphasize his athletic, muscular body: Smith’s height is 6.33 feet (193 cm.), and his weight is 205 lbs. (93 kg.). There are many tattoos on his arms, legs, back, and chest.

Today, Anthony Smith continues to participate in MMA fights. The beginning of March 2019 brought the meeting with Jon Jones. The event took place in Las Vegas, US: the sportsmen were fighting for the UFC Light Heavyweight Champion title.

Anthony’s opponent was estimable; they spent five rounds trying to win the long-awaited prize. Although Jones lost two points because of landing an illegal knee, the jury gave him the victory. Smith’s fans got upset about it. They are looking forward to their favorite’s new achievements and believe Smith will win the championship one day.